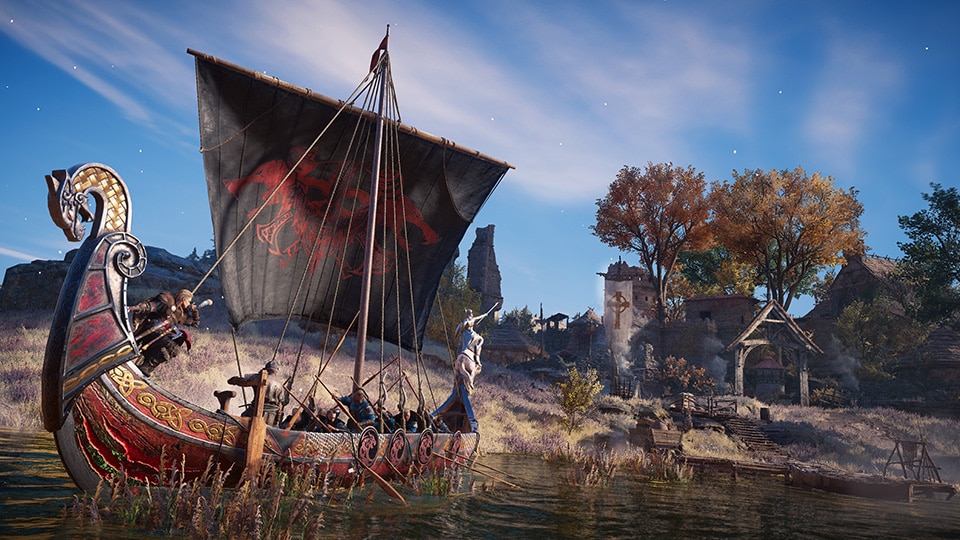 Assassin’s Creed Valhalla’s raids, which let players storm treasure-laden targets alongside the crew of their longship, are the focus of the new replayable River Raids mode added to the game as part of a free update. Available now, the update also brings new skills, gear, and other rewards, as well as new ways to upgrade Jomsvikings.

Jomsvikings – the special, customizable lieutenant crewmembers that can also be recruited from other players – factor heavily into River Raids, which let players explore three distinct new maps of rivers around England’s coast. These are high-stakes raids with different rewards, which you’ll tackle with a new, customizable longship and a crew exclusively made up of Jomsviking recruits. Both the ship and the Jomsvikings can be leveled up, and upgrades enable players to haul more resources back to the Ravensthorpe settlement – but unlike raids in the main campaign, downed crewmembers can be lost if players don’t revive them in time.

Players can boost their Jomsvikings’ abilities with the Jomsviking Hall, a new unlockable settlement building. The hall can be upgraded to three different levels in Season 1, with each level also raising the level cap on the player’s Jomsviking – which determines their perks – while also allowing you to recruit additional Jomsvikings from other players.

Once players are ready – which is to say, once Eivor has arrived in England and completed either the Grantebridgescire or Ledecestrescire arc, built the Barracks, and recruited a Jomsviking Lieutenant – they’ll be able to launch into River Raids from a dedicated dock at the settlement. After an initial tutorial, the first two maps will be open for plunder; to unlock the third, however, players will need to find clues hidden across the first two. The River Raids update also brings a variety of new rewards, including three new abilities hidden at monasteries, and unique weapons and gear including the Saint George Armor set and Great Sword.

Assassin’s Creed Valhalla is available now for Xbox Series X | S, Xbox One, PS5, PS4, PC, Stadia, and Amazon Luna, and is included with a Ubisoft+ subscription. For more on the game, check out our previous Assassin's Creed Valhalla coverage.