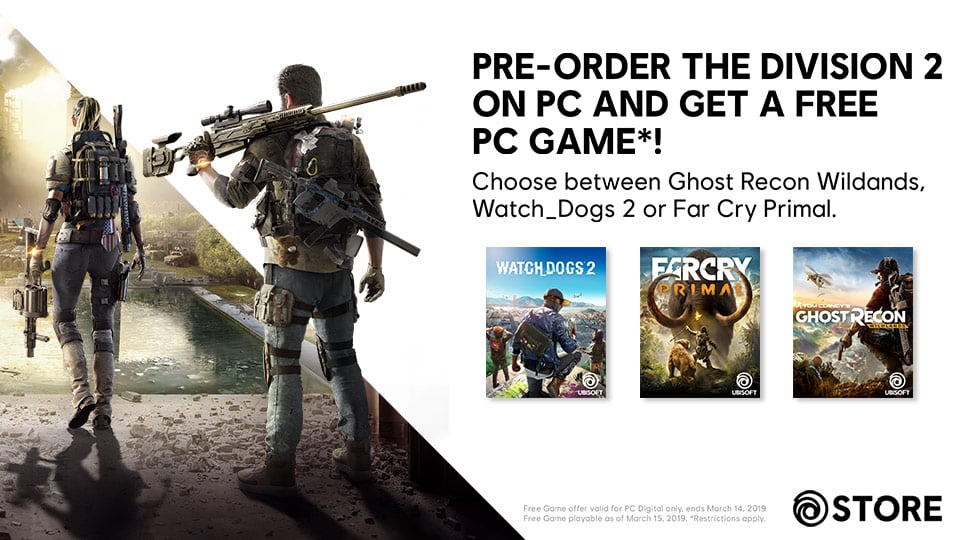 The Division 2's March 15 launch date is fast approaching, and Ubisoft is offering a special reward to players who pre-order the game on PC: a free copy of Ghost Recon Wildlands, Watch Dogs 2, or Far Cry Primal. Starting on February 13, all you have to do to take advantage of this deal is pre-order The Division 2 PC digital version (standard, gold or ultimate edition) from the Ubisoft Store or any official retailer on or before March 14, 11:59 PM PT. And don't worry if you've already pre-ordered; you've got a free game coming your way too. Here's how it works.

Simply pre-order any digital PC edition of The Division 2 and activate it in your Uplay library. You will receive email instructions on how to select and redeem your free game. If you've already pre-ordered The Division 2 on PC, be sure that it's activated in your Uplay library, and then visit http://thedivisiongame.com/freegame for instructions on how to proceed.

You will be able to install your free game right away, and it will become playable on March 15. Note that your free game offer will expire on March 31, so be sure to claim it before then, and if you cancel your pre-order, the free game will be removed from your library.

Speaking of those free games, here are your three choices: Ghost Recon Wildlands is an open-world military shooter that challenges you and up to three friends to take on a sinister cartel using a huge array of weapons, gadgets, and vehicles. In Watch Dogs 2, you play as a hacker named Marcus Holloway, who uses ingenious hacking abilities to take on shadowy corporate forces in a massive re-creation of the San Francisco Bay Area. And in Far Cry Primal, you step into the role of a Stone Age hunter and fight for the survival of your tribe against massive predators and other vicious enemies. The Division 2 launches on March 15 on PC, PS4, and Xbox One. For more on the challenges that await as you try to take back Washington, DC, check out our previous coverage.