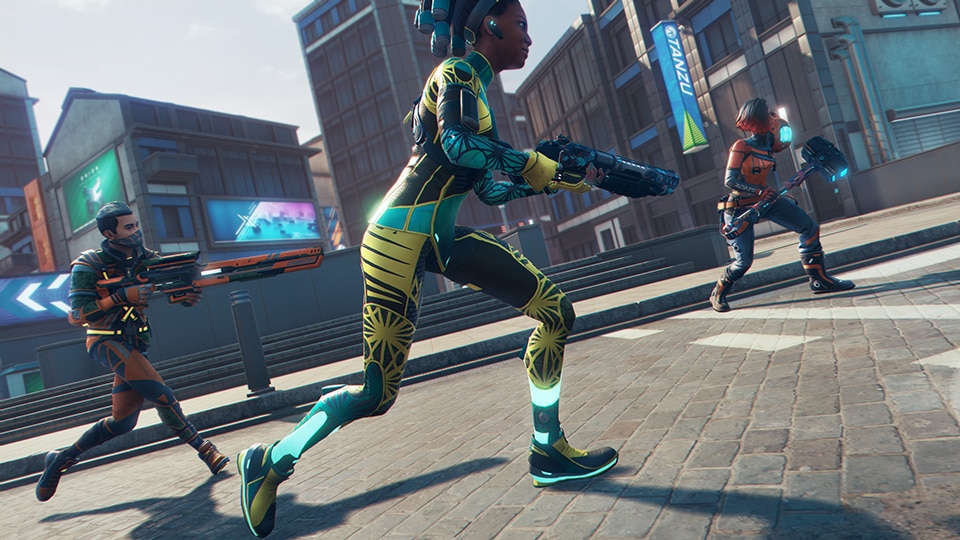 Hyper Scape Out Now on Consoles and PC

Hyper Scape is out now and free to play on PS4, Xbox One, and PC, letting players jump into the urban landscape of Neo Arcadia and mix it up in 100-player battles. Hyper Scape’s launch coincides with the arrival of Season One: The First Principle, which kicks off the game’s overarching narrative, and adds new events, content, and a new Battle Pass.

Season One also adds Kudos, a tool for use with Twitch’s Crowncast extension. Kudos can be purchased with Twitch Bits, and enable players can support streamers by reacting to exciting moments with in-game visual effects. Speaking of Twitch, the Hyper Scape Creators Cup finals begin on August 14 at twitch.tv/hyperscapegame, running from 11AM PT to 1PM PT, and pitting 25 teams of streamers against each other in a heated competition to claim a share of a $50,000 prize pool.

Set in a virtual city of the not-so-distant future, Hyper Scape lets players run solo or fight in three-player squads as they battle it out to be the last ones standing, or to find and hang on to an elusive Crown to claim victory. In addition to a variety of weapons, Hyper Scape also lets players bend reality with hacks, which grant abilities ranging from teleportation to homing mines. Players who find more than one of the same hack or weapon can fuse them to create more powerful versions, with four fusion tiers per item.

Season One introduces a new weapon for players to wield, the mid-range Dragonfly, as well as a new Magnet hack that can trap opponents. Players will also be able to progress through free and premium Battle Passes (either by playing or by watching Hyper Scape streamers with the Crowncast extension enabled), which offer 100 tiers of rewards that – thanks to cross-progression – can be used across multiple platforms. Season One will also introduce new limited-time events that can dramatically change the game, beginning with Lethal Melee, which gives melee weapons the power to eliminate enemy players in one hit.

Season One also introduces a mysterious new storyline to the action, which players can uncover by collecting Memory Shards to reveal more about key characters and events. A new Memory Shard will be hidden somewhere in the world each week, and comics will be released to build Hyper Scape’s story during Season One.

Hyper Scape is free to play now on PC, PS4, and Xbox One. For more on the game, check out our previous coverage.