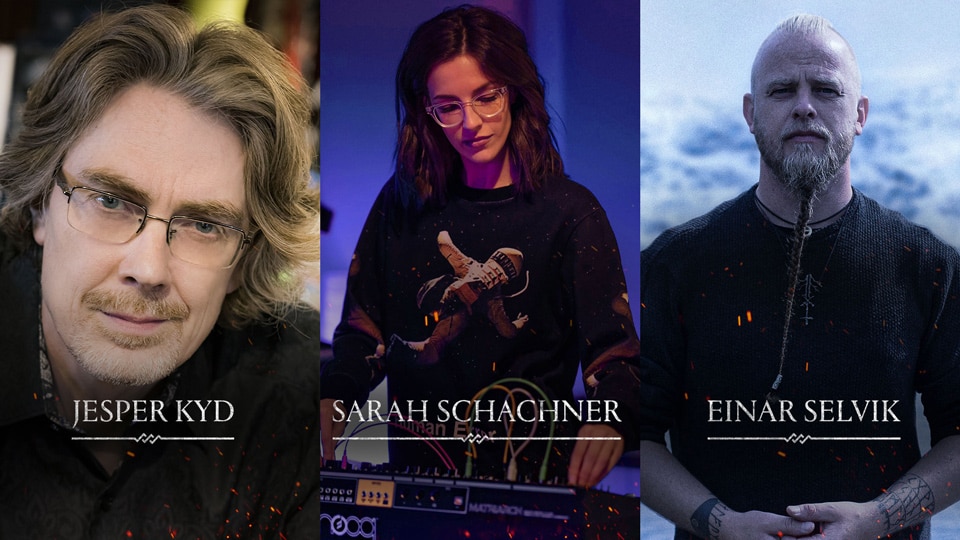 What feelings were you trying to inspire and evoke with Assassin’s Creed Valhalla’s Main Theme?

Sarah Schachner: We wanted the atmosphere of the theme to instantly transport the listener to another time and place, filled with mystery and uncertainty. There are Norse instruments, but they are used in a more modern way. The theme represents Eivor’s journey, as well as the Vikings’ hope for a better life as they move further south into the Anglo-Saxon regions [of England].

Jesper Kyd: We wanted to evoke Eivor's journey, what drives her, and the bond she has with her family. Eivor is searching for something, and this longing to find it and resolve it is a key element reflected in the melody and mood ideas I contributed to the theme.

Einar Selvik: The hope was to make something that reflected or created an overall arc of the theme of the game. The game is set in such dramatic times, and so the emotional aspect of it is something I wanted to elevate with my contributions. Generally, I think it made a lot of sense to bring all the game´s composers together for such a central piece, allowing the song to further reflect the different expressions the players will encounter throughout the game. 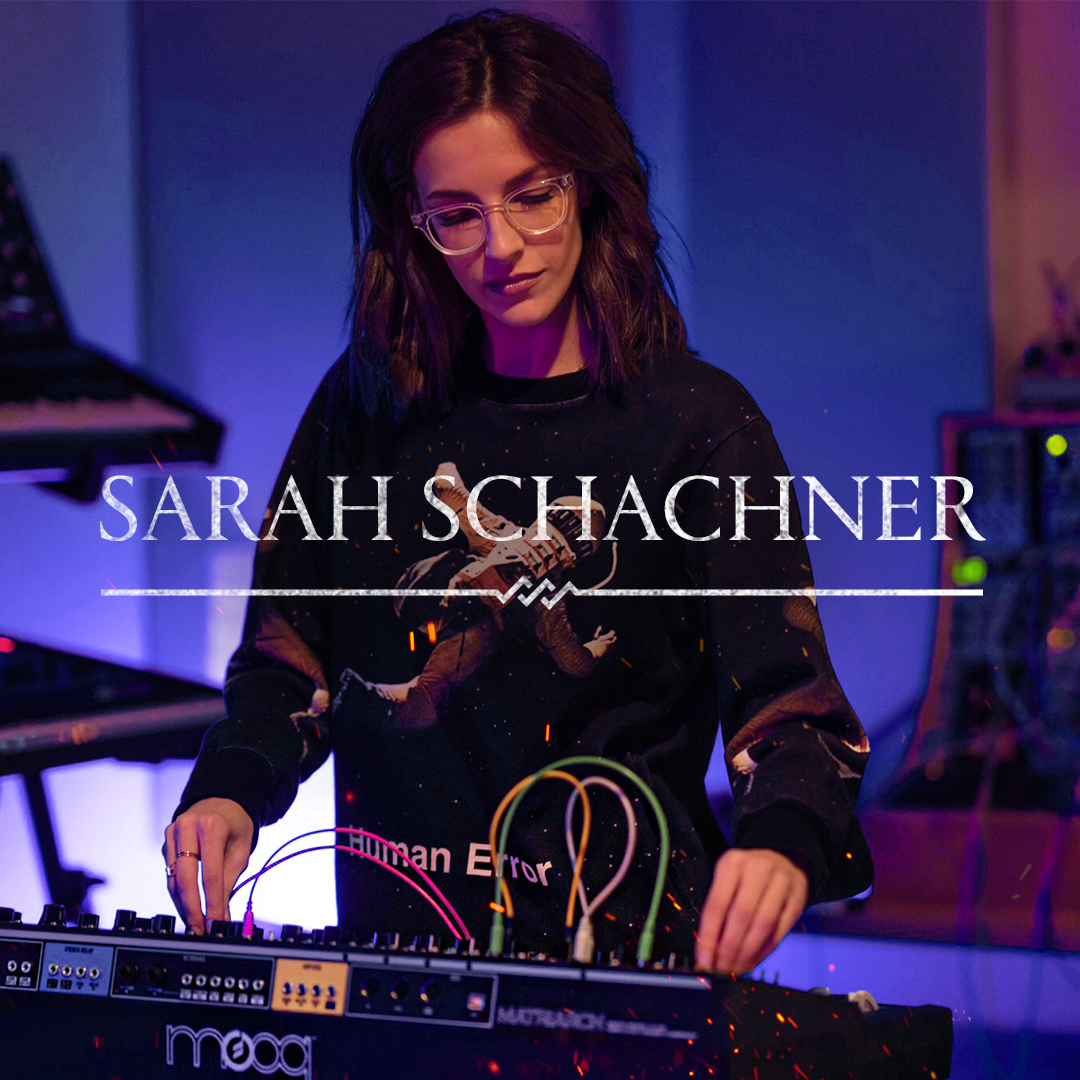 Some previous Assassin’s Creed scores have tried to reflect the sound (or imagined sound) of the eras and places in which they’re set. Did you draw on any instruments or compositions from the ninth century and/or Scandinavia when creating the theme?

SS: I really love the sound of Norse music, so this was a great opportunity to dive in and get inspired by all sorts of music, and explore different instruments. I not only wanted to reflect the Viking sound, but also the Anglo-Saxon sound and the merging of those cultures. The main string melody is played by a group of tagelharpa, a bowed string lyre from Scandinavia.

I wanted the theme to very much feel like a modern composition, while utilizing ancient instruments and textures to evoke the Viking atmosphere – but I never limit myself to only instruments of the time. There is an ancient Celtic war horn called the carnyx that you will hear subtly in the theme, and all over the score. I recorded it with John Kenny in Scotland, who is one of the few people in the world who has one reconstructed and can actually play it. We were also thrilled to have Einar lend his powerful vocals to this theme.

JK: When coming up with an initial idea for the theme, I used mainly string instruments, such as a processed acoustic cello and metallic drums to play the melody. Others featured on the game’s score include Scandinavian instruments used by the Vikings such as tagelharpa, tagelharpa cello, harps, fiddles, Viking horns, wind instruments such as bass flutes, and lots of drums and percussion instruments. I always process these recordings to update them into a more contemporary sound. I also mix these instruments together with modern and classic analog synths and mixing hardware.

ES: Nordic historical instruments, and Nordic ethnomusicology in general, is something I have been working with now for almost 20 years, and is perhaps the main reason I was brought into working on the music for this game. The music team at Ubisoft wanted the music to reflect the era and the various cultures one meets in the game – not only through the instruments themselves, but also the traditional tonalities, rhythms, and even lyrical compositions. Music is such a powerful art form for transmitting specific emotions and atmospheres, and so presenting musical creations that have their foundation from something authentic will necessarily have a huge potential to bring the player closer to the theme and era of the game.

Did you learn about or use any instruments you’re not used to using?

SS: I acquired a number of horse-haired bowed instruments from various regions, including a bass and alto tagelharpa, as well as a plucked lyre and animal hide drums. I had never played these before, but they were incredibly fun to use, and I love the primal character these rustic folk instruments have. John Kenny, who played the carnyx, also played some conch shell and cow horns that would have been used by Vikings at the time.

JK: Yes, I used a lot of new instruments for this score: rebec, crwth, tagelharpa cello, morin khuur, and many more.

ES: As far as the instrumentations goes on this, my contributions were within a very familiar territory. 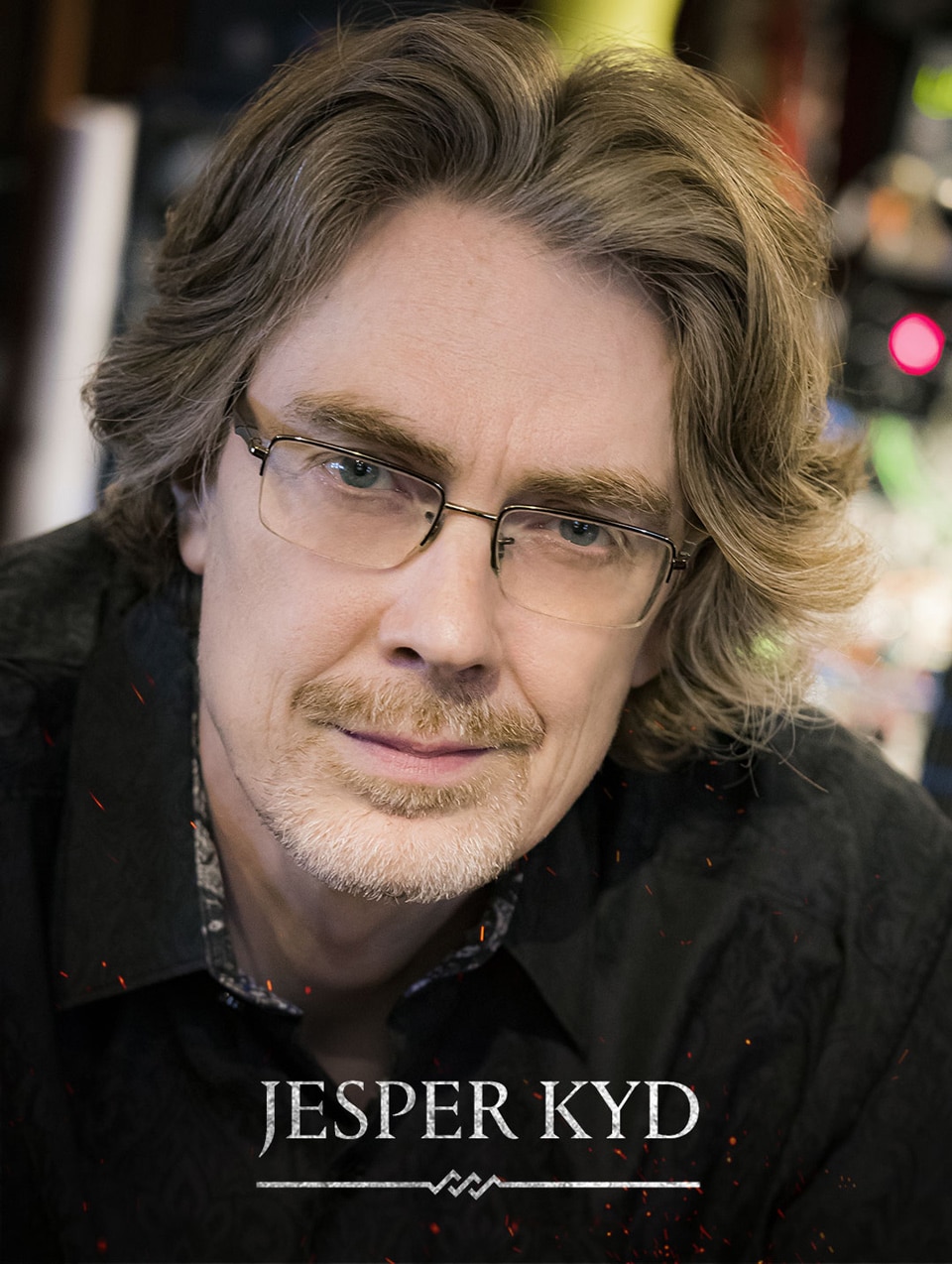 What sort of information does the development team give you when you have to design a theme or soundtrack?

SS: Scoring a game of this size is a very long process, and we’re given all sorts of material to help along the way, like gameplay videos and character info. However, the game is very much in progress as we’re creating the music, so sometimes imagination is your best friend.

JK: I had some great talks with Simon Landry at Ubisoft, music supervisor on Assassin’s Creed Valhalla, about what they were looking to achieve with the theme and the overall mood and feeling.

The string instrument playing at 1:12 has a sort of haunting, muffled-echo quality; is that a peculiarity of the instrument? If not, why create that effect?

SS: I intentionally wanted that repeating motif to feel ambiguous and invite the listener into this mysterious world. You can make a sound feel more eerie by pushing it back in the sonic space and blurring it with effects. I wanted to evoke an image of Viking ships slowly emerging out of the mist, which was one of the first images I saw for the game.

The song really builds up to the 1:50 point. Was there a particular story you wanted to tell, or mood you wanted to set with that build up?

SS: That build represents the grand journey you will embark on playing this game as Eivor. The chord structure in the theme is interesting because it doesn’t actually resolve or ever go to the root chord of the key until the very last note of the piece. This creates a continuously building emotional tension, propelling you towards something, which is at the heart of the Viking/Anglo-Saxon conflict.

Each of you has a very different style; what was it like working together on a single song?

SS: I’ve been very into collaborating lately, so it was exciting to work together on this. Despite the quarantine and social distancing situation, Jesper and I were able to write this theme together remotely. He started a melodic idea for Eivor with this somber and emotional tone that felt like a great jumping off point for the main theme. From there, I expanded on it melodically and produced it out to a point where we could send it to Einar. His vocals took it the next level and that’s when we felt we had something really special. I was so inspired by Einar’s singing that I collaborated with him on a few other pieces as well.

JK: It was a new experience for me to collaborate in this way and fun to see the direction where Sarah took my initial ideas in the creative process. I included ideas for vocal parts and it was especially interesting to hear my melody played by Sarah in double tempo. The theme would not have sounded the same had we not collaborated on it together. That was really cool to see. Also, Einar’s vocal contribution was fantastic and it’s great to hear him lending his voice to the theme.

ES: Collaborations with talented people are always interesting and educational, as you get “invited” into each other’s creative process where the task is often to balance where to take – and where to give – space. I believe that the mix of styles can potentially create a very strong synergy effect. We all work with musical expressions that are highly visual in their expression, and since a lot of these ancient instruments have a natural cinematic quality to them, I felt confident it would be a good match. 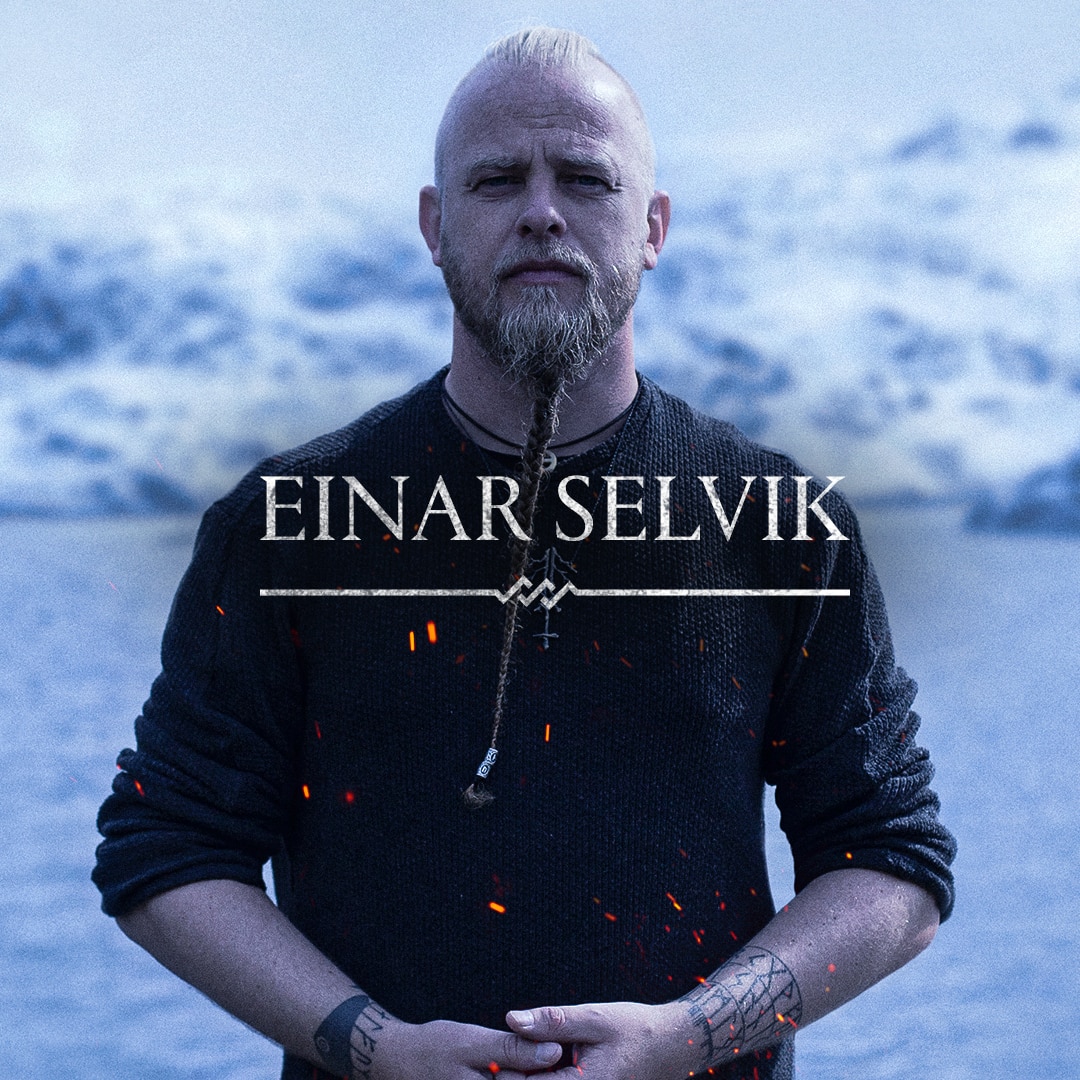 When you listen to it now, are you able to appreciate each of the individual contributions?

SS: Absolutely. I don’t think any of us would have written something exactly like this on our own, and it’s amazing to hear how each person’s contribution came together and elevated it.

JK: Yes, absolutely. Once I felt I found a theme idea that was true to Eivor and the overall story of Valhalla, and since we wanted the track to be a collaboration, I subsequently passed it on to Sarah for her to continue working on it. So writing the cue was a real collaboration between the two of us.

ES: Absolutely. I think it ended up being a very well-balanced piece of music that feels like a solid, unified work, rather than a mix of composers.

Sarah and Jesper, this isn’t the first time you’ve composed an Assassin’s Creed main theme; what had you learned about doing it before, and what was different about the process this time around?

SS: This was the first time either one of us had collaborated on a main theme. Keeping an open mind and letting go of some control can result in really interesting and surprising things, musically. The process was a bit like putting puzzle pieces together, but I’m pleased with how seamlessly each contribution came together.

JK: Each project is different. Sometimes the theme presents itself to you, and other times you sit down and say, OK, I'm going to write the main theme. I think it’s important to set aside time to develop a theme. So I often end up writing a lot of themes, and each new version gets me closer to the truth. Once a theme feels truthful, then I often work on the structure and rhythm. Sometimes I work the other way around too, but you have these different phases to go through to get to the end result.

Einar, this is your first time working on an AC main theme. What was the experience like for you?

ES: This was a first for me, and the fact that it was done together with Sarah and Jesper, who both are so experienced in this field, I guess allowed me to go into the process with low shoulders and just focus on whatever I could do to contribute. It was an honor to collaborate, and [I’m] thankful for the experience!

What part of the process are you most excited for? Revealing it for the first time, or having people experience it in-game when the game launches?

SS: I’m excited for people to hear it as a standalone piece of music and get to know it that way. Once they experience it in the game, it will take on a different life.

JK: I think for people to hear it for the first time, whether that's in the game or on the second EP.

ES: There are many exciting parts in the course of presenting a piece of music, but for me, the most important and most personally rewarding part will always remain the actual process of creating it.