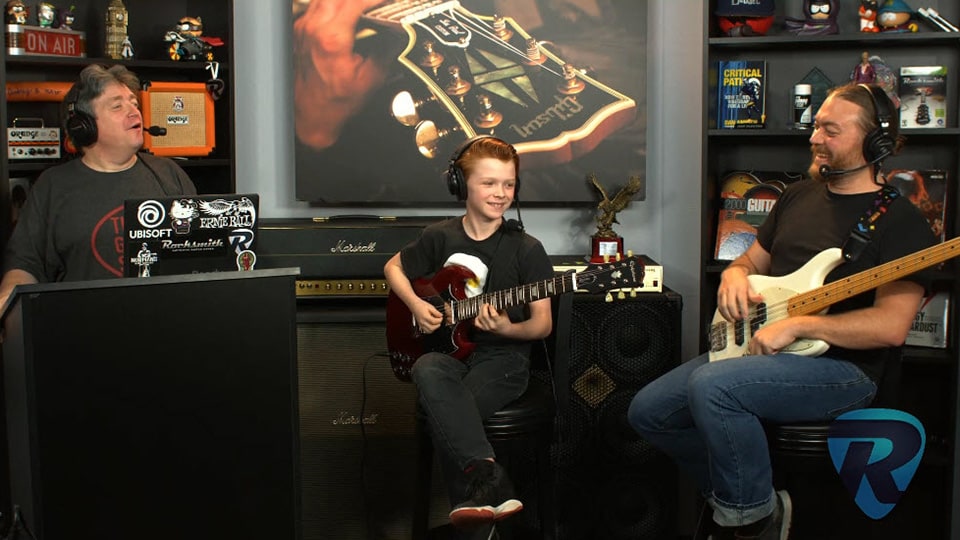 Some kids get a summer job – selling lemonade, mowing lawns, flipping burgers. Vincent Molden's summer job is rocking your face off. At just 12 years old, he's touring the US in School of Rock: The Musical, singing, dancing, acting, and most of all shredding as the school's lead guitarist, Zack. When Molden thanked Rocksmith in his official show bio, we knew we had to meet when the tour came to San Francisco, and last week, he joined us for our weekly developer Twitch stream to meet the team and jam.

"I picked up a real guitar when I was six years old, and I started playing electric and Rocksmith when I was eight years old," Molden said. "Rocksmith is amazing."

A series of auditions in Chicago and New York landed him the School of Rock gig in December, which led to rehearsals in February before the tour kicked off in March. He'll be out on the road until the end of August.

When it comes to gear, Vincent plays an Epiphone SG strung with Ernie Ball Super Slinkys (.009 gauge) through different rigs based on where he is. "On tour, I have a mini Blackstar amp, because I only need a clean tone for my pedals. My normal setup is a G2Nu multieffects pedal into a Fender practice amp. It's bigger... it can get loud."

Everybody has a dream guitar, so we asked him his. "Probably either a PRS or a Gibson Les Paul, like Slash," he said quickly. "I'm really interested in Guns N' Roses."

With more than 500 hours of playtime to his credit, Molden certainly knows his way around Rocksmith. Before he left for that evening's performance, we gave him the opportunity to play any song from the game, and he blew us away with a performance of Rush's "La Villa Strangiato," which you can watch below – all nine minutes and 45 seconds of it.

You can follow Vincent's cross-country adventures through his Instagram account @thewildvincentofficial, and you can check out schoolofrockthemusical.com for full information on the show... before school's out!