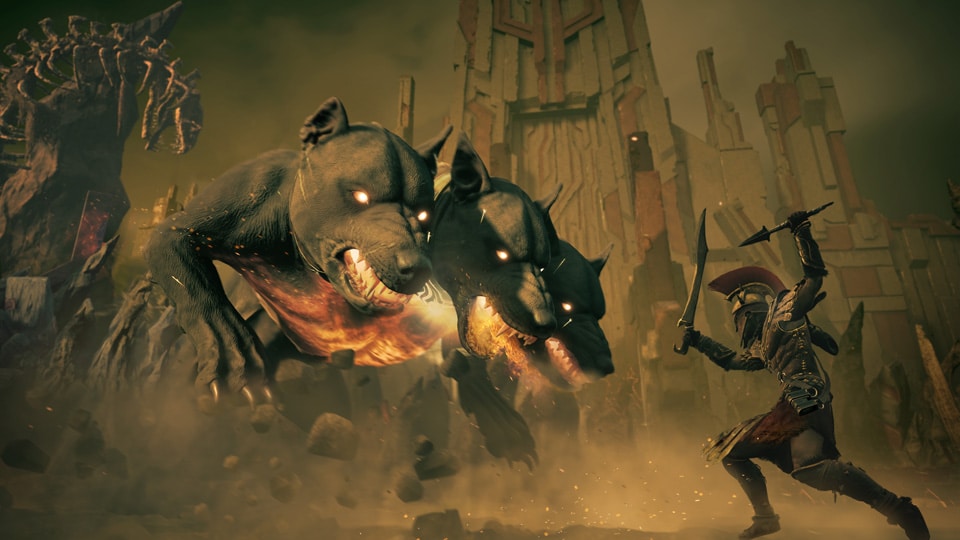 Assassin’s Creed Odyssey – Enter the Underworld in Torment of Hades

Torment of Hades, the second episode of Assassin's Creed Odyssey's The Fate of Atlantis story arc, arrives on June 4 to open the way to the Underworld. Picking up immediately after the events of Fields of Elysium (the first episode of The Fate of Atlantis), the new episode immediately throws Alexios or Kassandra into a fight with Cerberos, the monstrous three-headed dog who guards the Underworld's gates.

Win the battle, and you can explore the twisted, wind-swept deserts of the Underworld, where you'll meet a few familiar faces who need your help to overcome their personal torments. You'll also find yourself in debt to Hades, who wants you to return some escaped prisoners to the pit of Tartaros – and, while you're at it, defeat four of Greek mythology's mightiest heroes, and convince them to serve as Hades' new guards. No biggie.

Meanwhile, the heroes – Perseus, Achilles, Agamemnon, and Herakles – are tough-as-nails fighters who sit atop a hierarchy of the Fallen. This replaces the mercenary rankings while you're in the Underworld, and while you can't move up the ranks – you're not dead, after all – you can use them to track the Fallen across the map. And you'll want to, because the Fallen – most of whom are fearsome thugs and cultists you killed when they were alive – carry pieces of the Armor of the Fallen, a set of powerful, spooky-looking gear that, once complete, lets you enter places only the dead are supposed to go. (This also means finding the full set is required to finish some quests.)

In addition to these new threats, the Underworld is filled with more of the glowing Isu soldiers and metal Kolossi that were introduced in Fields of Elysium. As before, these troops are far tougher than any rank-and-file soldiers you'll meet in Odyssey's re-creation of Greece, and they wield supernatural abilities that can deal massive damage, knock you off your feet, and stop you from using your Abilities in combat.

You'll have new tricks to give you an edge over your enemies, however; in addition to deadly new Legendary weapons, you'll be able to add three more enhanced Abilities to your arsenal by finding hidden tablets known as Keeper's Insights. These power up existing skills to make them something completely new, and so long as the corresponding skill is at level 3, you can turn the enhanced versions on and off without spending any additional Ability points. The new Abilities include:

Torment of Hades is available as part of the Season Pass, or for players who purchase the Fate of Atlantis story arc separately. To start it, you'll need to be at least level 28, and have finished Fields of Elysium, the Between Two Worlds questline, and the Lost Tales of Greece quest titled Heir of Memories. If you haven't met those conditions, you can also jump straight into Fate of Atlantis with a special shortcut option that starts you out at level 52, with preset abilities and resources – although you won't be able to carry that progress over to your main game save or earn achievements.

Torment of Hades will be available to Assassin's Creed Odyssey players on June 4 on Xbox One, PS4, and PC. For more on Assassin's Creed, check out our previous coverage.