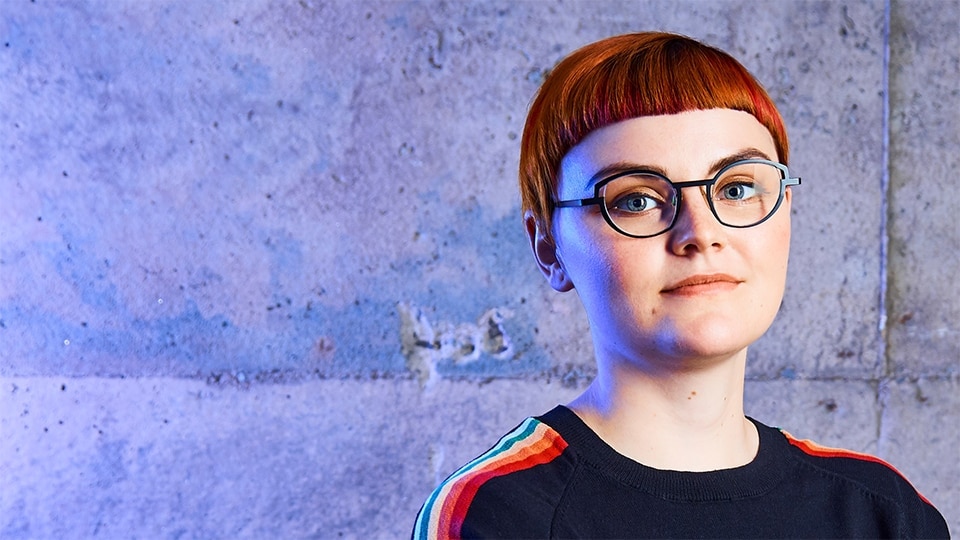 Five years ago, Melissa MacCoubrey was a scriptwriting intern at Ubisoft Montreal. Today, she's the narrative director for Assassin's Creed Odyssey. An alumna of Bishop's University in Sherbrooke, Quebec, MacCoubrey studied English literature, theater, and creative writing before starting at Ubisoft in 2013.

During her internship, MacCoubrey gained a wealth of experience by working on multiple titles at once. Rather than writing for one specific game, she worked on all titles, filling in when and where she was needed. She provided feedback on AAA scripts for lead writers, while also contributing her own writing in the form of tutorials and AI dialogue.

Nowadays, MacCoubrey's role is to build entire narratives alongside other teams. She is responsible for building and managing a team of writers, maintaining a coherent vision throughout the entire project, and overseeing everything from scripts to motion-capture cinematics. In her time at Ubisoft, she's worked on Far Cry 4, Assassin's Creed: Freedom Cry, Assassin's Creed Syndicate, and Assassin's Creed Odyssey.

Did you always want to work in games?

Melissa MacCoubrey: I was one of those nerds that always knew what they wanted to do, even when I was little. I picked up Pokémon Red and I was like, "I need to be in the videogame industry, some way, somehow." I wasn't sure how, but I knew I really liked world-building and the concept of making games, so I thought maybe I could contribute to art or story. Somebody had to make these things, right?

I went to a private school, and in my admissions interview they asked me what I wanted to do when I grew up. I told them, "I want to make videogames," but was told I had to go to university instead. So I had sort of put it on the back burner and went to school. I studied the arts; I was writing, acting, drawing, and studying things that you can't really guarantee you'll get a job in, but I always knew what I wanted to do.

You just unveiled Assassin's Creed Odyssey at E3. What is the development process like at this stage?

MM: Right now, I'm playing our game a ton. We're at the stage of fixing bugs and calling them out as we all see them, not the most glamorous stuff, but you get the picture. If you asked a year ago, it would've been planning out the story with Creative and Game Direction, or working through scripts with my team, but it changes every couple months, and right now it's just finalizing and polishing up things.

Since the job changes so frequently based on the development cycle of the game, what's your favorite part of the process?

MM: I think every part of the process has moments that are super exciting. I think my favorite part of making a game is the conception phase, when all your ideas are "pie-in-the-sky" ideas and you can come up with the craziest things. That's when you really start to ground yourself in what the story's going to be and how it's going to communicate with all the other game systems that are new and exciting. That's when you build the foundation of the world.

What do you think prepared you most for this job?

MM: Doing a degree in theater helped me quite a bit. Especially in my role now, I have to present to the team on a regular basis. I have to sell the ideas of the story to my own writing team, and I have to do presentations to various offices and departments. I have to constantly get people excited about this game. Being a theater major and practicing improv really helped with that, because you always have to be on your feet and ready for anything, but you also need to exude that passion that draws people in.

When you're a narrative director and you need to sell your story vision, you have to have a certain level of confidence in what you're going to make. I think theater has given me the confidence to do that.

You went from an intern to narrative director on Assassin's Creed in just five years. How did you move up so quickly?

MM: I think there's a certain degree of "right place, right time," but also I think there are other reasons. This is a bit of a weird example, but I used to play house league volleyball (laughs). It was recreational, we'd play every week, but it wasn't super competitive. A lot of the kids that play recreational volleyball when you're 13 and 14 don't really want to be there, so if you want to avoid coming in last place, you kind of have to learn all the positions. Because of that, I was able to recognize when we had a hole on our team and was able to fill it, or find someone who could fill it for us.

Being able to recognize that something wasn't working like it should, or being able to tell if something is at risk of falling through the cracks and identifying how you can help it, has really helped me. It's important to recognize the big picture and then be able to support or delegate to be able to fill our needs. If you're someone with a good grasp on the higher-level issues, more people will come to you with issues that need to be solved and questions that need to be answered. When you're a director and you find someone who can recognize all the different ins and outs of a game, those people become very useful.

"You can never stop learning about representation and what matters to people in different perspectives."

MM: It was a decision made by the entire Syndicate writing team, as we thought it for the best. One of my biggest takeaways from my time working on Syndicate was that anyone who wanted to play our game should feel comfortable in that environment. It doesn't matter where you come from or what you look like; if you play the game, the game should be welcoming to you as a player, regardless of how you identify.

Why do you think it's important to try and represent as many people as possible?

MM: I had this very strange moment when I was an intern in Montreal, when I went out to lunch with people I am very good friends with today, but didn't know that well at the time. One of them was a creative director, and he said that the point of first person shooters, and the point of a lot of AAA games, is that you feel like you are the character you're playing. That really struck me, because I had never felt like that. I always think about my relationship with the game as if I'm like an overseer, as opposed to the character itself. Then, that summer, I had my first experience where I felt like I was the person in the game. It was this crazy connection that I had never felt before and it made me say "whoa, I've been missing out on something here."

I don't think I really had an approach to telling stories in games at that point, because I was so new – and if you've never made a game, it's hard to understand all that goes into it. But after that summer, I realized there was a lot to unpack in the games industry and the entertainment industry as a whole. It really opened my eyes to how I've consumed media my whole life and what I was missing in certain things. I've grown up fairly privileged, but I have watched movies and played games where I felt that there was something missing that I couldn't quite put my finger on, and it was that realization that helped me identify it.

Between Freedom Cry, Syndicate, and now Odyssey, you've worked on some of the most diverse Assassin's Creed games. Did you help shape them in that way?

MM: It's funny, I've developed a bit of a reputation now. I don't even have to say anything anymore, and people will assume I'll get mad if there's a lack of representation (laughs). But I still have so much to learn. You can never stop learning about representation and what matters to people in different perspectives. I am only one person with one perspective, but I'm really curious about how other people see things. There are some people who come in with a high expectation for how things have to be, and I understand that point of view in something like the games industry where you want things to change overnight, but they don't. You have to be somebody who continuously pushes for things to make that progress. And you have to practice kindness and empathy the whole way.

Kassandra in Assassin's Creed Odyssey is the first female assassin that's consistently playable from start to finish in a mainline Assassin's Creed game. How did you go about designing the story with her in mind?

MM: It was important to me that if we were going to let you choose if you are going to play as a woman or a man – which is awesome, because I think that everyone should be equal – it should be an equal experience. I was really adamant that we not make it a bad experience for someone who chose a female character. If their experiences are vastly different, you can make someone feel bad about making a certain choice. When you think of historical fiction, there are a lot of naysayers who say things like, "oh, well this isn't historically accurate" but I don't think they realize that it would suck to have people yelling at you because you're a woman for the entire game.

It would've been terrible if we made a game where people were constantly berating you for being different. That's not something you have fun in. I was adamant that we didn't call out the gender differences. At the end of the day, we're making a videogame, not a historical documentary. In the spirit of equality, I wanted to make sure you weren't getting a different experience for the wrong reasons.

It actually presented us with a really interesting challenge of designing a character with two different genders. There's also the fact that they're voiced by different actors, so they each add their own flavor to the character. I'm actually really happy that I got to work with both, because I got to learn so much more about how to tell a story that fits a person, rather than just a gender.

What advice would you give to women who want to do what you do?

MM: What I usually say for women who are brand new to games is, try to make as much stuff as possible that is related to games. I recommend making an interactive story through Twine, making a prototype of a story though RPG Maker, just try to make your own stuff. If you end up submitting a portfolio full of interactive narratives – even if you don't have any formal experience – it gives you an upper hand and tells people that you've started to learn design on your own. It lets people know that you're capable of telling a multi-piece story in a way that includes the player or reader in the journey through their input.