Immortals Fenyx Rising: A New God, the first of three DLC adventures, is out now. Taking place after the events of the main campaign, it moves the action to Olympos Palace, a vast complex in the clouds that the Greek gods call home. After their journey across the Golden Isle, Fenyx has been invited to ascend to godhood and join the Pantheon – but first, there’s a test. A series of tests, actually, taking the form of puzzle- and monster-filled vaults, all designed by the gods themselves and built around all-new puzzle elements and abilities.

The numerous vaults in Immortals Fenyx Rising: A New God are similar to the main game’s Tartaros Vaults, in that they’re (mostly) linear levels packed with environmental puzzles and combat arenas – but the challenges here are bigger, trickier, and more complex. (They’re also a lot sunnier, thanks to being set in the gods’ home instead of an ethereal pit of despair.) They’ll also introduce new puzzle elements for players to master, including Tesla coils that can spread their current via strategically placed metal blocks, and interconnected portals that only allow objects through.

Each of the Golden Isle’s central gods – Ares, Aphrodite, Hephaistos, and Athena – reappear in Olympos with their own set of vaults for Fenyx to tackle. Make it through a few of their trials, and they’ll award you one of four new ability upgrades, which are essential for getting through the DLC’s later puzzles. (Fenyx starts the DLC already powered up, so don’t worry about not having made enough campaign progress, unless you want to avoid story spoilers.) Athena will augment Athena’s Dash with the Immortal Field Breaker, which lets Fenyx smash through red barriers. Ares adds the Wind Gust to Ares’ Wrath, letting players generate a pillar of wind that can lift them up higher or activate wind-powered mechanisms. Hephaistos grants Colossal Strength, letting Fenyx lift huge objects with Herakles’ Strength, and Aphrodite bestows Phosphor’s Swap, which lets you instantly switch places with a statue-like clone (and which even works if you pick up that clone and throw it somewhere distant). 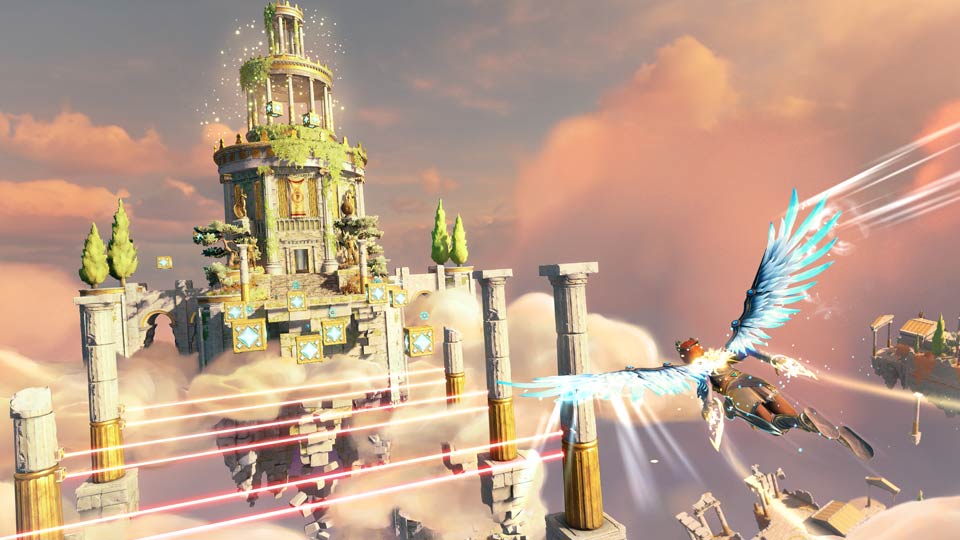 You’ll also earn a new set of divine armor and weapons over the course of the DLC, which impart new perks that range from a huge reduction in damage from enemies and traps, to extra midair jumps with the Wings of Daidalos. Keep your eyes peeled for the relics of other gods, which Hermes has locked away behind optional puzzles hidden just off each trial’s main path.

The trials in Olympos are just the start of the planned DLC for Immortals Fenyx Rising, which will continue with an adventure through Chinese mythology in Myths of the Eastern Realm; and culminate with a brawl through monsters as a new champion in The Lost Gods.

Players who still haven’t tried Immortals Fenyx Rising can get a taste via the free demo, which is now also available for the first time on Xbox Series X | S, Xbox One, PS5, PS4, PC, and Switch. Featuring exclusive content that doesn’t appear in the main game, the demo offers a sampling of Fenyx’s abilities with a short quest to discover the Secret of the Cyclops.

Immortals Fenyx Rising: A New God available now on Stadia, Xbox Series X | S, Xbox One, PS5, PS4, PC, Switch, and Amazon Luna, either as part of the Season Pass, as a separate purchase, or with a Ubisoft+ subscription. For more on Immortals Fenyx Rising, check out our previous coverage.