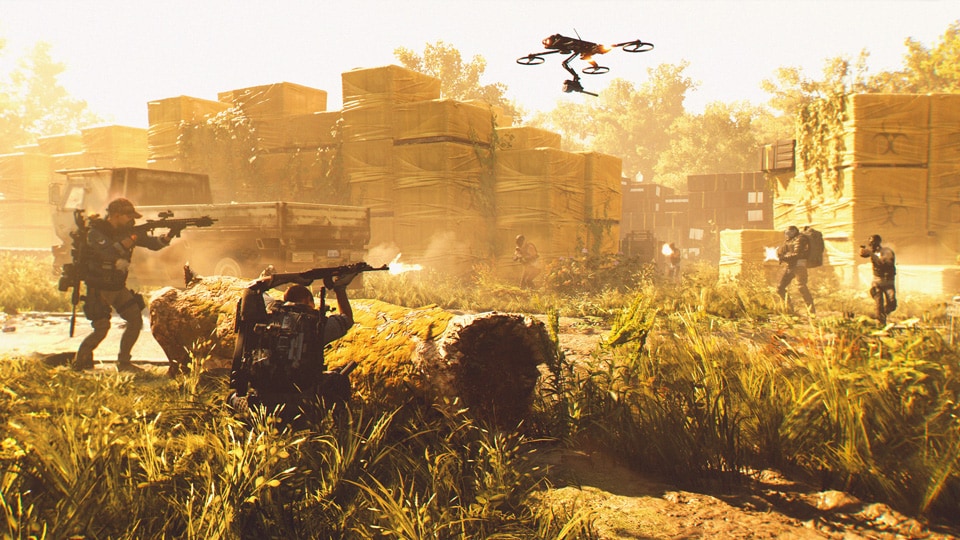 When the AI team at Massive Entertainment was getting ready to start in on The Division 2, they first took time to look back at what they'd accomplished in The Division. They wanted to celebrate what they'd done well, identify areas for improvement, and brainstorm new ideas that they could bring to the sequel. From this retrospective came a vision for AI in The Division 2: the enemies would be more diverse, more challenging to take on, and more satisfying to defeat, while the friendlies would be more formidable allies and more involved in the fight for Washington, DC.

We talked to Lead AI Designer Drew Rechner and Lead AI Programmer Philip Dunstan, who shared details on how the AI team brought their vision to fruition. They started by looking at the enemy factions and acknowledging that, in The Division, there were some winning tactics that players developed that would be effective in most situations. To remedy this in The Division 2, they wanted to lean into one of the franchise's core strengths.

"The beauty of our game is you can build your character through your gear and through your playstyle, through your weapon, all that kind of stuff. We really wanted to support different approaches in a better way than we managed in The Division," says Rechner. "And a big aspect of that is the AI and the way that they behave. So we wanted a lot more diversity in how they push you, and how they retreat, and how they flank, and how they use space, all of those things. We're trying to challenge the player in all these different ways, so they can counter-play against it in different ways."

In order to differentiate the four factions – Hyenas, True Sons, Outcasts, and Black Tusk – the team developed four traits; each faction was rated on their Aggression, Organization, Training, and Tech. In the Aggression trait, for example, a faction can either be aggressive or defensive. Aggressive factions want to close in on you over the course of the fight, so they will reposition and advance more quickly, circle you when they get close, and fire for longer, uninterrupted periods. Defensive factions, on the other hand, prefer to fan out and engage you at a comfortable range; they won't reposition as often, and will shoot in shorter, less-exposed bursts.

These traits come through clearly in-game, as anyone who has gone from fighting the aggressive, rush-happy Hyenas to the defensive, wide-flanking True Sons can attest. And while the Hyenas and Outcasts are both aggressive factions, being pressured by the organized Outcasts is a startling change compared to the disorganized Hyenas. Enemies are further diversified through increased archetype differentiation; which is to say, a sniper for the True Sons (uses a Marksman rifle, can go prone) will threaten the player in a different way than a sniper from the Outcasts (uses a compound bow, fires explosive arrows).

This variety is especially valuable given The Division 2's emphasis on the depth and longevity of the endgame. Factions in The Division represented tiers of difficulty; this was good for increasing the challenge over the course of the campaign, but not as good when players reached the endgame and the LMB was the only faction complex enough to really challenge them. In The Division 2, "A lot of the changes we made are so people can get enjoyment out of replaying against the AI," notes Dunstan. "Using those traits, and differentiating the enemy factions by their style of combat, really helped us counterbalance the pluses and minuses to keep the factions at kind of the same level," elaborates Rechner. "That means we can put them all at the end of the game, and the players can still have all this variety."

Tactics, traits, and enemy types can make foes more challenging and diverse, but the team also wanted to refresh the moment-to-moment gameplay to make combat more satisfying for players. To make landing shots feel more impactful, they added more pronounced hit reactions for enemies, including more flinching and staggering, as well as body part-specific death animations. They also made enemies dodge and duck more to challenge the players' aim, and added weak points to more enemies, which reward players who hit them by damaging the enemy and disabling their ability to, say, throw grenades or revive allies. Finally, they implemented a new, destructible armor-plating system to create narrative context for why high-health enemies can take so much damage. Not only is it satisfying to blow off an armor plate, it's also a good tactic that enables skilled players to take down tougher foes more quickly. In fact, Rechner says that the time it takes to kill enemies is faster in The Division 2.

"To me, it really means that the highly skilled players are going to be able to kill NPCs quicker than they could before. So we're really rewarding accuracy, really rewarding tactical awareness, those things. But enemy survivability is about the same as it was in The Division. If you take into account inaccuracy with weapons – because they're ducking and dodging and stuff like that, plus they're a little bit smarter in how they move and how they pressure you – when you actually land a hit, it has meaning, right? It feels really good. And if you worked really hard to hone your skill, or you worked really hard to get that advantageous position, there's a payoff."

Who Are The People in Your Neighborhood?

Enemy factions weren't the only focus of the AI teams' efforts. They also wanted to revamp the friendly NPCs, making them more involved in the world around them and more independent. The isolated encounters with people rummaging in the trash or arguing over a can of food made narrative sense in the immediate aftermath of the pandemic in The Division, but the team knew things would be different seven months later in Washington, DC.

"In The Division, it was just civilians," recalls Dunstan. "You got the impression that there were a lot of civilians behind the scenes and everyone was scared to come out, and you just got a few desperate people that were on the street. For The Division 2, we really wanted to reinforce this idea of communities banding together and fighting back. It just adds so much more depth to that emotional part of the world."

To give the people a purpose, the team created Living World Activities. On a practical level, these are sequences of objectives for groups of NPCs to perform. A group travels through the open world, approaches a resource site, gathers resources, travels back to safety, and despawns discreetly. Strung together, these objectives form a cohesive Living World Activity called Gather Resources.

These activities govern group behavior, and within the group, each NPC is assigned a duty. These might be activity-specific, like resource-gatherer, or they could be contextual, like taking patrol duty when traveling to the site, then switching to overwatch duty once they arrive. The overwatch duty sends the assigned NPC to an elevated position, and because the level designers know the AI team has created this duty, they can populate the environment with opportunities for this systemic behavior to happen. They know that if they design an area to have, say, a shipping container with some sandbags on top, then a friendly NPC will use it for overwatch. This connection makes the NPCs smarter about their environment, providing stronger context for their actions and strengthening the sense that they live in this world.

Doing It On Their Own

But what happens if a group of Hyenas is patrolling the area during their own Living World Activity (yes, the bad guys live in this world too), and they run across our resource-gatherers? Then everyone's combat behaviors kick in. The sniper on overwatch duty starts shooting, until an enemy gets too close and their sniper behavior tells them to put more distance between them and their foe. The resource-gatherer drops their box of food and starts fighting as well, perhaps assuming a combat-specific duty at the mounted gun. When the dust settles, the victors resume their Living World Activity. The Hyenas go back on patrol; the resource-gatherer picks up the box of food, tops it off, and starts their journey back home with their fellow survivors.

The key here is context and continuity. These people know where they are the world. They have a reason for being there, and they are going to see their mission through whether the player is involved or not. So if you see a group of friendlies out and about, you might just jog on by. You might do the jumping jacks emote to pep them up. Or you might decide to tag along.

"You don't have to get involved as a player," Rechner says, "but the reason why a lot of people do is that it's unpredictable. They don't know where the AI is going, so it's like adventure is in store, right? You don't know what's going to happen, and it's often going to play out differently. And I think it feels really good to help out these civilians who, in turn, actually help you out, too."

Dunstan recalls a moment just before the private beta when a civilian did just that: "I'm doing one of the control points, and we had just cleared it, so enemy reinforcements are coming in. And one of the civilian reinforcements took up the mounted gun and just started mowing down the guys coming in. And it's like, I don't need to be here. This is really cool. I feel like they're capable, and the fact that it was using the system that we put in place to let them have that ability was just really cool."

The improvements and innovations that the AI team developed and implemented for The Division 2 have had wide-ranging impact, and that's due in part to the team's understanding that sometimes the small stuff can have a big effect. When asked if there was any of the team's work that they were particularly happy with, Dunstan was quick to answer.

"As part of updating the AI dialogue system, we moved all of the dialogue decision-making to the server. So now, if you're playing co-op with friends, you will hear the same lines as your friends. This is something that, as a co-op player, you don't really notice. It feels natural to you. But on The Division, we didn't have that. We decided which line to play differently on everyone's machine, so they may have heard slightly different lines. And one of the first videos we saw coming out of the Division 2 closed beta was people commenting on the lines. They all heard the same lines, and they were riffing off the lines that they heard. For us, that was a big win. It was quite a lot of work, but we knew if would be important to create that immersion."

So now, when you and your co-op buddy share a laugh over the enemy who taunted you just before you took him down, you'll know who to thank. The Division 2 is out now on Xbox One, PC, and PS4. For more on the latest updates, check out our previous Division 2 coverage.