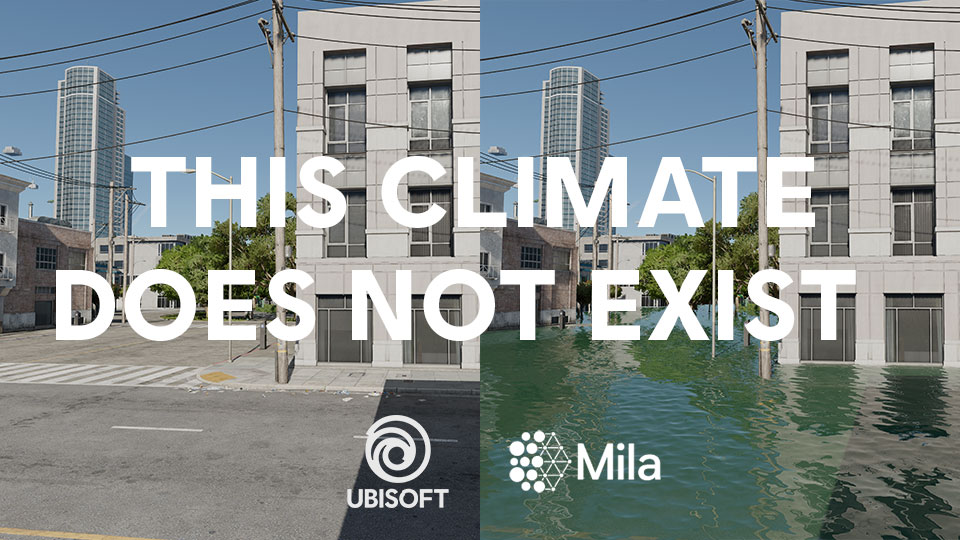 From October 31 to November 12, more than 100 heads of state and thousands of
diplomats are meeting in Glasgow for COP26, this year’s United Nations Climate
Change Conference. They are negotiating to set new targets for cutting worldwide
greenhouse gas emissions, with the intended goal of preventing the average
global temperature from rising more than 1.5 degrees Celsius, or 2.7 degrees
Fahrenheit, compared to pre-industrial levels.

As global leaders meet, the question of how climate change affects us
individually and what part we can play to combat it is more pressing than ever.
A new website called This Climate Does Not
Exist – launched by a group of AI
scientists at Mila, a Montreal-based artificial
intelligence research institute – seeks to generate more awareness about climate
change and help everyone take action. Using cutting-edge machine-learning
technology, the website allows users to visualize the effects of extreme weather
events – flooding, air pollution, and wildfire smoke – at any address in the
world through automatically generated images.

“These images are AI-generated and do not exist,” the website reads, “but the
environmental disaster they portray is very real.”

“Climate change is a wicked problem, because there’s a lag between the actions
we do today and their result,” explains Sasha Luccioni, postdoctoral researcher
at Mila and one of the leaders of the project. “Even if we hit the brakes on
emissions now, we might only see the results in 50 years.”

The idea behind the This Climate Does Not Exist website and its technology is to
reduce that psychological distance by using images that are familiar to the
viewer, and showing what they could look like if they were affected by extreme
weather events.

“We want to help people project themselves, “similar to what Ubisoft does
through videogames, we can use digital technology for educational purposes.”
Luccioni adds. “The visualizations don’t mean that your house or a specific
place will necessarily be underwater. It’s more to think of our planet as our
communal house, which is suffering from a communal crisis. We need to bring that
crisis closer to motivate more people to act.”

What the researchers in Luccioni’s team found was that, for purposes of
awareness-raising, images of polar bears and melting icecaps feel distant;
moreover, most people don’t respond well to doomsday messaging. In the case of
extreme weather events, the audience has a bigger chance of taking action if
they see suggestions of what they can do about it.

At the heart of the project is the ability for anyone to generate their own
images. Instead of focusing on major landmarks, as other projects have done,
This Climate Does Not Exist encourages users to see how climate change could
affect places they have a personal attachment to. “That could be a famous
landmark, but it could also be your parents’ house, your school, or your
favorite travel destination.” Luccioni hopes that users will start searching
locations beyond their homes – just as we’ve done here by providing images of
some Ubisoft studios around the world – and share them widely. “It’s by sharing
these sorts of messages and declaring publicly that we all care that we can
bring about communal and political change.” 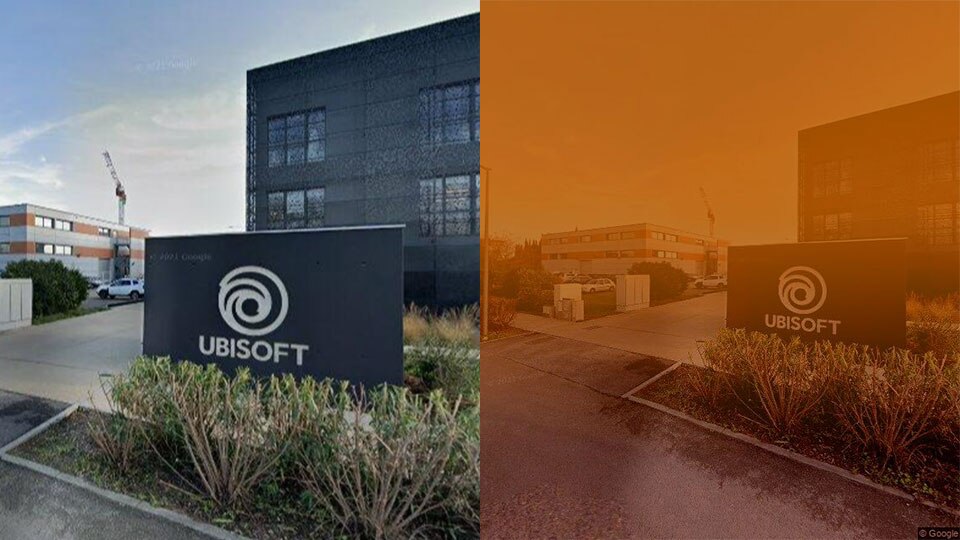 Flood Against the Machine

This Climate Does Not Exist generates images thanks to a machine-learning
technology called “generative adversarial network,” or
GAN. The GAN
gives an artificial intelligence the ability to generate new content, such as
images, text, and even music, from a training set. In this case, it’s an
algorithm that teaches itself to generate increasingly realistic images of
flooded areas by discriminating between real and fake images. Ubisoft partnered
with Mila’s researchers specifically to help the GAN generate images of flooded
areas.

“To train the AI, you have to show it a ton of images of areas before and after
they’re flooded,” explains Yves Jacquier, executive director at Ubisoft La
Forge, Ubisoft’s Montreal-based research and development hub. “The system
generates images on its own, and discriminates between real and fake images.
After some iterations, the discriminator can’t differentiate between the two
anymore, and you know your images look real enough.”

The team’s challenge was that they lacked good-quality images of an area before
and after flooding. “People tend not to stick around during a flood,” Luccioni
says. Jacquier’s team stepped in with a solution: they modified the engine used
to develop the version of the San Francisco Bay Area in Watch Dogs 2, creating a
data set of images of places in the game’s world before and after raising the
level of the water.

What the team discovered was that the GAN’s “flooded” images became a lot more
realistic when it had a combination of real and game images to teach itself.

“It’s harder for the system to generalize what a flooded area looks like using
only ‘real’ images, because there’s more superfluous information,” Jacquier
explains. “But with a game engine, you can use exactly the same object
placement, scene, and lighting. You’re sure that the only difference is the
flooding.” 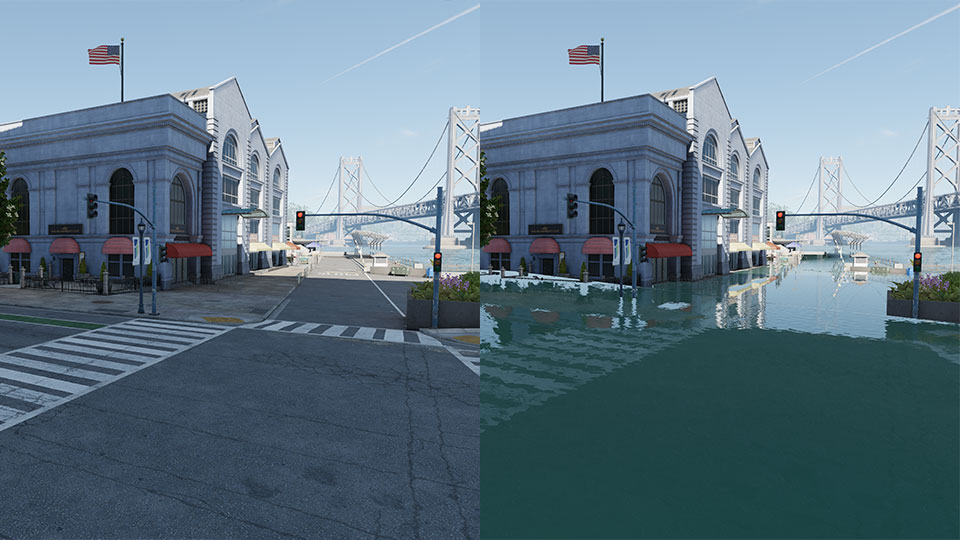 In fact, the images of flooding particularly were more complex and took longer
to create than the team had anticipated. Unlike the representations of air
pollution and wildfire smoke, which can be represented with a filter adjusted
based on depth, flooding is more contextual and affects only part of the image,
with the added complication of reflections.

“We had to create a two-step approach,” Luccioni explains. “First, the GAN
creates a map of the image with all its elements, and then projects a flat plane
to determine where the water will be and what it will look like. We had to
disentangle the rising water from the rest of the elements.” That way, the
website’s AI is able to raise the water around objects like mailboxes and
cars, creating more realistic representations.

An important aspect of the project is its transparency. All of the research code
is open-source, and the simulated flood dataset from Watch Dogs 2 has been
publicly available on GitHub since last year – an unusual step for a videogame
company like Ubisoft, which tends to keep game assets under license.

“For us, keeping our data open-source is part of a larger interest in
transparency, helping the field progress as a whole. It’s important to give
others the chance to reproduce what you’ve done, to keep improving on it, and
also to show that it really works,” Luccioni adds. 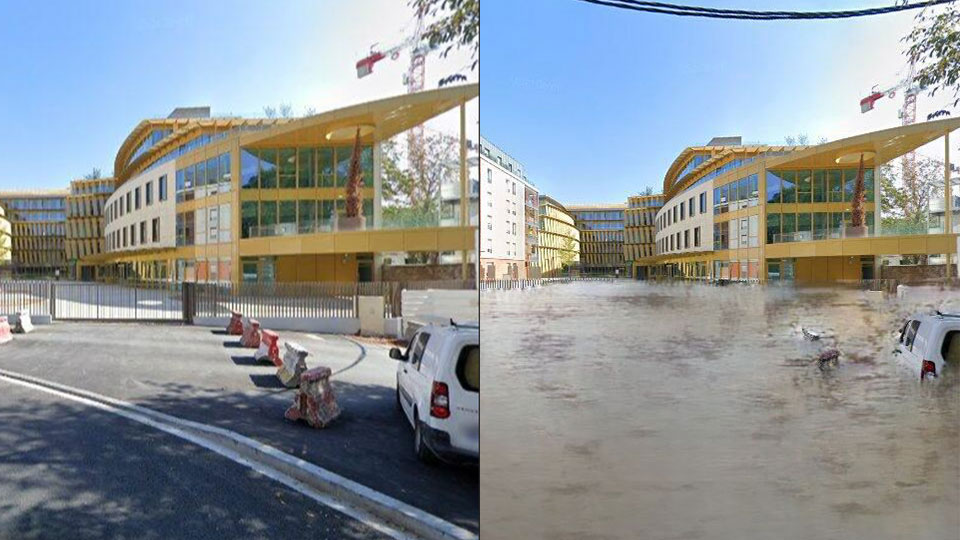 For Luccioni, This Climate Does Not Exist came after an epiphany about how her
research in AI was squaring up with her personal beliefs. “After my PhD, I was
working on applied AI research in finance, and it didn’t feel aligned with my
social involvement and personal beliefs with regards to the environment.”
Research projects like the ones she has a chance to work on at Mila show the
positive applications for this kind of technology. 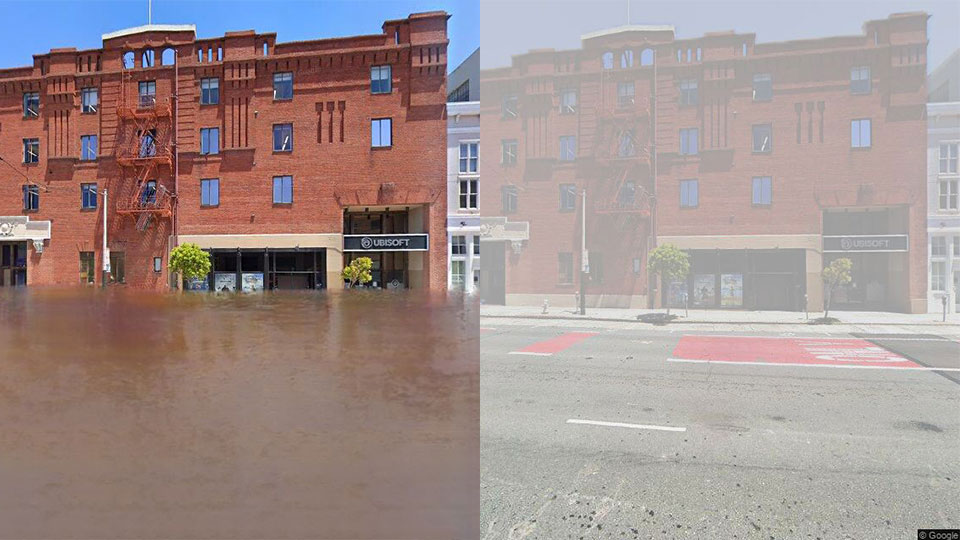 The website’s experience leads to an “Act now” section that offers a menu of
collective and individual actions. “It’s a global website, so it’s tricky to
factor everyone in,” Luccioni says. “The goal was to be as general as possible
in our suggestions, without making it generic.” Another encouraging sign is that
individuals and organizations are reaching out to use the images and the backend
technology in different settings like classrooms and awareness campaigns. “We
want to collaborate, but also let others run with what we created and make it
their own,” Luccioni says.

“If you had asked me a few years ago how videogames can help generate awareness
and action about climate change, I would’ve immediately thought about game
development, which is a long and complex process,” Jacquier adds. “But in fact
this particular idea was quite simple, and made use of tools we already had at
our disposal.”

For Jacquier, the collaboration with Mila on climate-change visualization was a
lesson in being curious about what can be done, and humble about what everyone
can bring to the table. “There are contributions to combating climate change
that we don’t necessarily think about, but in fact we can all do our part in
different ways. In this case, it was opening up the Watch Dogs 2 engine to
generate images of places in the game before and after they were flooded. Who
would’ve thought?”

In 2021, a year rife with extreme climate events around the world, leaders of
developed countries appear to be struggling to revise their emission targets and
stay on course for keeping the global temperature rise below 1.5 degrees
Celsius. The AI-generated climate visualizations of Ubisoft studios and offices
included in this article may show us something that doesn’t exist, but the
climate crisis we’re all in is very real indeed.

For more about Ubisoft’s environmental approach, including our commitment to
global carbon neutrality, visit
ubisoft.com/environment.