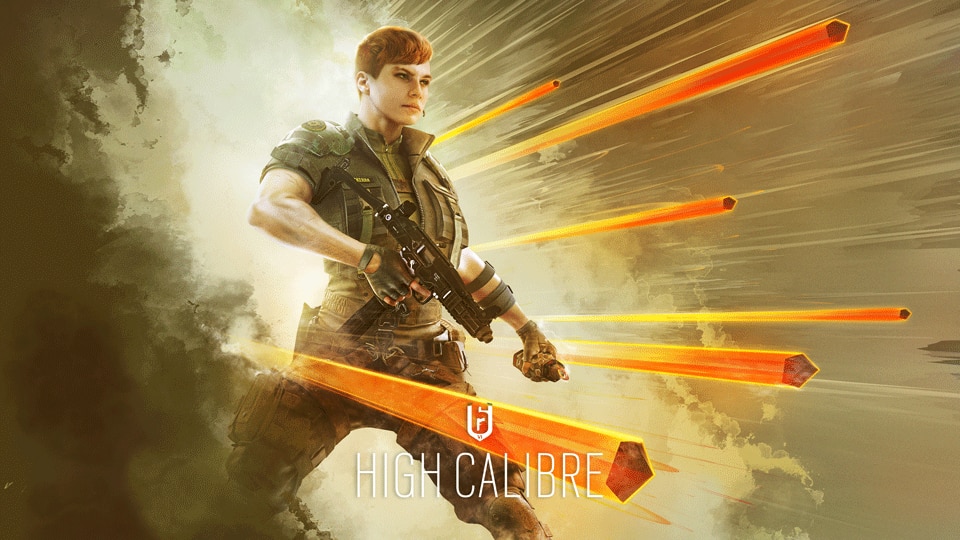 High Calibre is introducing a deadly new Operator and a powerful new weapon for
the fourth season of Year 6 of Rainbow Six Siege. Thorn joins the Defenders,
hailing from Ireland and packing a destructive new SMG along with her Razorbloom
Shells – sticky, proximity-triggered devices which she can hide around the map
in devious locations. As usual, Thorn will be available at the launch of the
season through the premium track of the High Calibre Battle Pass, and will be
available to unlock two weeks after launch with Renown or R6 Credits.

High Calibre will also come with a suite of free updates, including a complete
overhaul for the HUD, giving players a fresh way to gather information at a
glance and laying the groundwork for developments to come. There is also a full
rework for the Outback map, balancing changes, player protection updates, and a
buff for Finka – she can now use her Adrenal Boost charges to get herself up
from a downed-but-not-out state.

Thorn and her Razorbloom Shells

Thorn’s gadget is called the Razorbloom Shell, a lovely name for a deadly
device. Thorn can throw these grenade-sized devices and they’ll stick basically
anywhere. After the fuse is set, the Razorbloom lies in wait for an Attacker to
wander into its proximity. When one comes close enough, the timer starts ticking
and, shortly after, the device unleashes a spray of high-velocity projectiles
that will absolutely take you down if you’re too close. It is possible to
survive a Razorbloom encounter if you are on the outskirts of the radius or
manage to escape it in time, but what makes it truly deadly is savvy Defenders.

Firstly, as an Attacker, hearing a fuse timer activate is alarming; you’re
likely to get distracted, and Thorn is likely to be nearby to take advantage of
that. Secondly, it’s a lot harder to sprint out of a Razorbloom’s deadly radius
when there is barbed wire at your feet, or one of Lesion’s Gu mines in your
ankle, or Melusi’s Banshee ringing in your ears. Thorn’s Razorbloom Shells can
make these gadgets much more effective. Thirdly, Clash. This shield-wielding
specialist can position herself in areas where Razorbloom Shells are deployed,
and then use her Charged Field Generator to slow down Attackers at just the
right time.

There are a number of ways that Attackers can mitigate their exposure to Thorn’s
gadget. Razorblooms can be destroyed by bullets or lasers or explosions, or
disabled by EMP. Their fuse timer does give you a window for a quick-reflex shot
providing a) you can find it and shoot it in time and b) you don’t get shot
while looking for it. If you prefer to play it more safely, you can scout for
Shells with Zero or IQ, or go hunting with a Twitch drone. Razorbloom Shells can
force the Attackers to burn time and betray their position, and if Attackers
choose to rush in without first sacrificing some time or intel, well, Thorn will
be more than happy to greet them with her M870 shotgun or her UZK50Gi submachine
gun.

The UZK50Gi submachine gun is entirely new, a custom weapon created by the Siege
team. It may be an SMG, but the UZK50Gi is chambered with 50-caliber rounds to
give Thorn plenty of destructive power, allowing her to rip through walls and
floors to gain an advantage. Complement it with her sidearm, the 1911 TACOPS
pistol or C-75 Auto machine pistol, and pair her Razorbloom Shells with Barbed
Wire or a Deployable Shield. Thorn is coming, so watch your step.

There is a full rework of Outback coming with the High Calibre season, and
almost every area has been optimized for cleaner navigation and better flow. The
garage size has been reduced, and more cover and windows have been added to make
it more viable for Defenders. Upstairs, there’s a new exterior breakable wall
close to the Party Room & Office bomb site, while the restaurant area downstairs
has been split beneath the shark to break up some big sight lines. On your way
over to the motel, you’ll notice that the outdoor Terrace has been enclosed, now
accessible through an exterior double door, and the motel rooms and bathroom
have been simplified to make for clearer, more intense engagements. There are
plenty more changes to adapt to, so be sure to check out the Discovery playlist
and learn the ropes.

For more on the updates coming with High Calibre, including balancing changes,
player protection updates, and more, view the full patch notes at
rainbow6.com. To watch
the best Siege teams in the world compete, check out the details for the major
tournament running right now: the Sweden
Major. Rainbow Six
Siege is available now on PC, Stadia, PS5, PS4, Xbox Series X|S, and Xbox One.
For more on the game, visit our Siege news
hub.