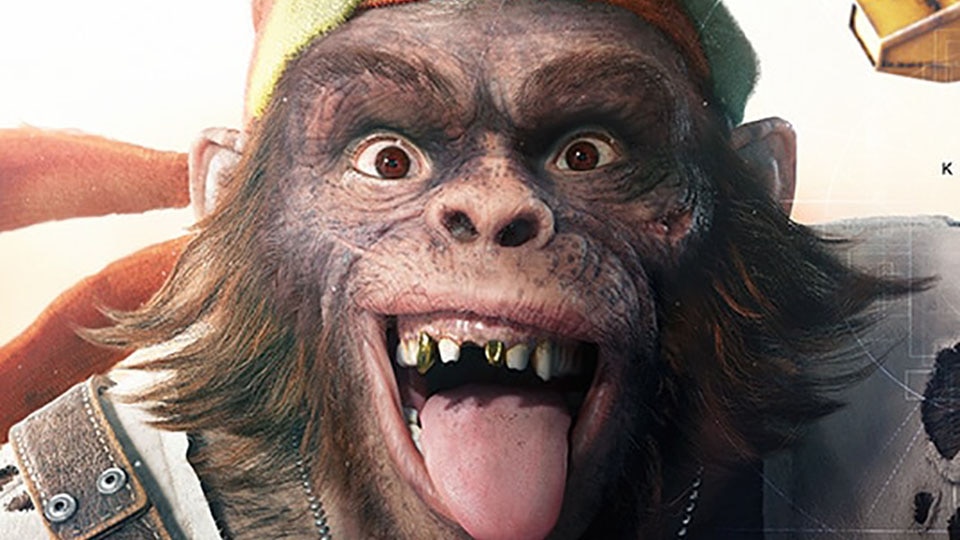 After an explosive debut at Ubisoft's E3 2017 press conference, the curtain that's been hiding Beyond Good and Evil 2 has been pulled back a little more. In a closed-door session, Creative Director Michel Ancel, Narrative Director Gabrielle Shrager, and Producer Guillaume Brunier walked us through their ideas for the game, showing off concept art, revealing a little more about the world, and using an in-engine controlled demo to illustrate the massive scale on which Beyond Good and Evil 2 operates.

Our first glimpse of the game is of the massive statue of the elephant-headed god Ganesh seen in the teaser trailer. It's so big that it dwarfs that also-gigantic pirate spaceship seen at the trailer's end, which floats in front of it as the trailer's city stretches out to the horizon far below.

"This is really huge," Ancel says, as he pulls in close to the pirate ship using his controller. This, he says, is fully controllable, and will be your home in Beyond Good and Evil 2. It's also your crew's home, as well as a garage for smaller, customizable spaceships that you can also control.

The ship's prow opens, and one of those smaller ships floats out. "Here, it's a generic ship, with basic controls," says Ancel. "And I just want to show you the scale..."

Ancel pulls the camera out until the city blends into its surrounding landmass and the curvature of the planet becomes visible. Suddenly, we're in space, and the planet that seemed so gigantic now looks tiny against the massive ringed giant it orbits.

"You can see that that city is just a little part of a huge world," says Ancel. "You see that we are just on top of a gigantic planet, which is in fact a little satellite of a bigger planet, with cities and the dark. And there is a simulation of the universe, where everything is rotating in the classical way, so if you change the time you see the rotation."

As Ancel speaks, he speeds up time in the demo, and the nearby planets and stars begin moving relative to the little planetoid we had occupied – including the sunlight, as days pass rapidly. He then zooms back to the statue, so we can see the effect from the ground.

"When you see the sunset, it's not just colors, it's the real sun going into this position," says Ancel. "If you know what a sunset is, a sunset is modification of the color of the sun depending on the angle in the atmosphere. So it's really logical, in fact, that you can see different colors."

He then gets out of the little ship as Knox, the monkey-human hybrid who starred in the trailer. (You won't necessarily play as Knox; Ancel says the player's hero will be a created character, and can be male or female depending on your preference.) Using Knox's jetpack, he flies up close to the statue, hovering inches away so that we can see the detail hammered into the bronze.

"Just to show you the kind of issues we are facing with the sizes, we need to have something like that," he says, indicating the statue. "Precise from space to one millimeter of distance, to see all the details. That's the kind of challenge we need to face for the game. It's not a small part of the world. Every centimeter needs to be very precise."

This is the scale Ancel and his team had hoped to work in when creating the original Beyond Good and Evil, he says, but it wasn't possible given the technology at the time. Even with today's technology, creating a game world the size of a star system is still a potentially daunting task, one that Ancel says is being undertaken with a mix of hand-crafted design and procedural generation.

"Cities can grow by themselves, they can be destroyed, they can connect to others," he says. "Everything is alive, in fact, it's not pre-scripted. So it's a balance. We can say, ‘this part of the planet has those kinds of resources,' and depending on those things, kind of emergent things... today, we can hand-craft everything, or we can decide to have a kind of robot that is going to calculate the history of the planet.

While the game will be procedurally generated to some extent, however, its story will be anything but.

"I would say the adventure system is classic," Ancel says. "We don't really want to create something crazy with an adventure generator... it's simple, but you have a lot of freedom in the way of solving things. So it's interesting to imagine a game where you can decide to do this or that, and the order is not that much important, and the way you manage the problems is your way of playing.

"We want people to create their play style, their crew, they customize their ship, but they are in the same universe, the same adventure," Ancel adds. "So you can say, ‘How did you get into the prison?' Oh, I did that and that.' ‘Oh no, I did another thing!' But at the end, everybody went into the prison and got the guy and added him to the crew. You will have different possible decisions, of course, but there is a structure. You can compare to each other what you've done." 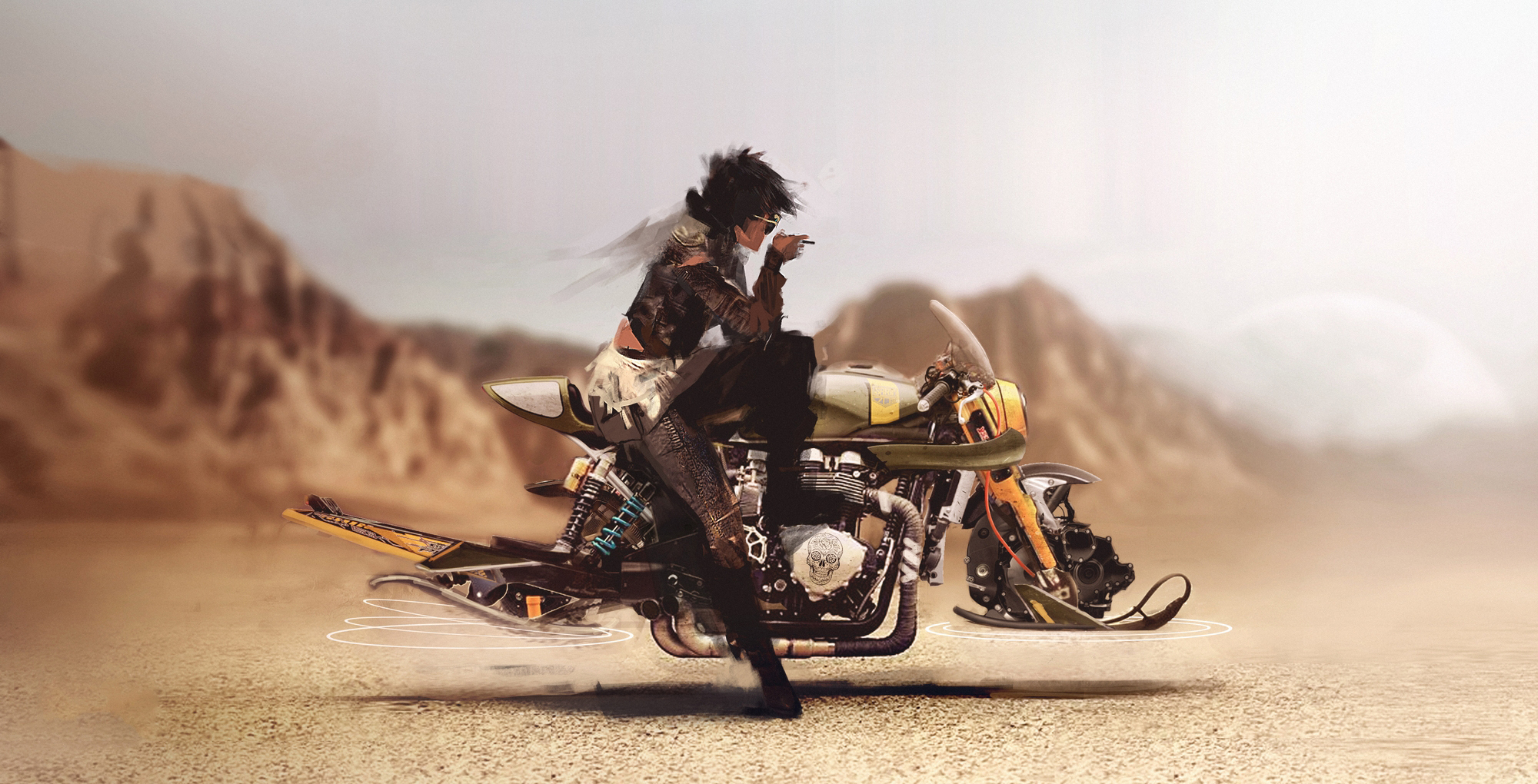 Beyond Good and Evil 2 is a prequel set in a vast star system, System 3, that sees players begin with very little and work their way up to becoming a legendary space pirate – and as soon as they have the means, they can go wherever they want.

"That is, for us, the feeling of traveling, of adventure," says Ancel when asked about Beyond Good and Evil's scale. "No boundaries. You want to go somewhere, you want to discover the world. That's the new trend in action-adventure games: you see mountains in the distance, there is something, a city, something that is attracting you, you can go there. Maybe it's very dangerous, but you can try to go there.

"We tried to make Beyond Good and Evil with what we had at that time, and it's cool, because it created something very unique," he says. "We want to retrieve the same feelings and the same emotion of entering a big factory, investigating about slavery or human trafficking... the same big theme, in a different world."

Beyond Good and Evil 2 will star your custom character, but the rest of the cast will be fully realized and, Ancel suggests, evocative of the first game's characters and themes.

"They are here, or their ancestors are here," says Ancel. "You don't play them, but they are in the world, and they are key to making this world unique... the DNA will be there. Plus it's not a reboot, it's a prequel, so you will discover a lot of information about those characters."

Beyond Good and Evil 2 takes place "about a generation before Jade was born," says Gabrielle Shrager, the game's narrative director. Long before human-animal hybrids like Pey'j were free, she says, they began as custom-made slaves designed to withstand the harsh conditions of interstellar colonization. 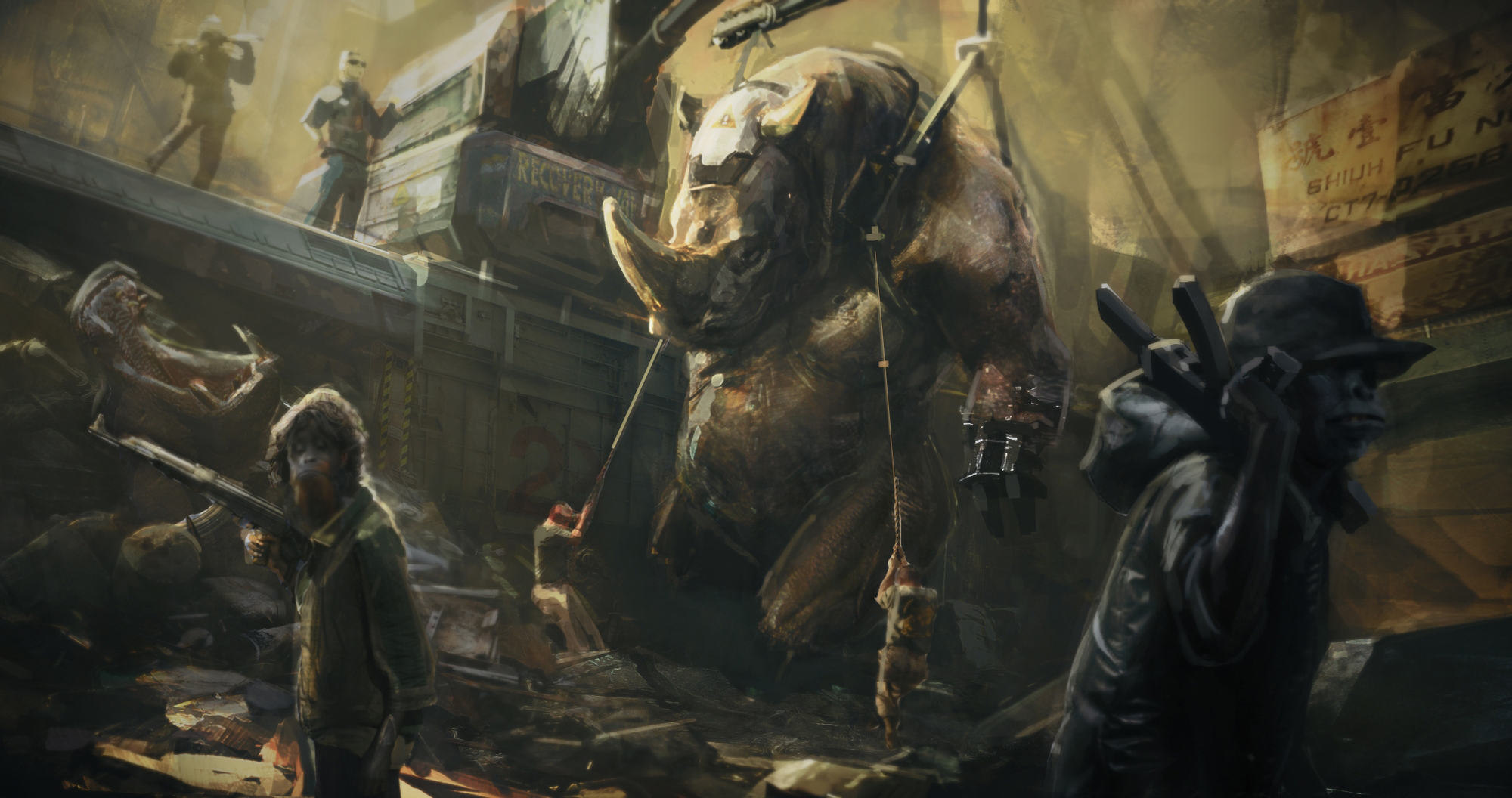 The demo city and its Ganesh statue were created by the first Indian colonists, she says, "while other cities will have influences that are Chinese, Mongolian, and as many Earth cultures as we can represent. They will explore into the stars and they will invent their own religions to give new meaning to their existence in this really harsh area."

The newly colonized System 3 has become a hub of interstellar trade – and as corporations exploit their hybrid laborers, the conditions are created for a new era of space piracy.

"And that's where the player comes in," says Shrager.

As Beyond Good and Evil 2 opens, says Ancel, you'll start at the low level of its social system with small vehicles, and gradually discover new vehicles and friends that begin to expand your world. As he's describing this, he points to a smattering of character concept art pinned to the wall.

"You can imagine that all these guys are people you met during the adventure, and then they join your crew and they help you manage this huge spaceship," he says. "So you need a crew, which means that you need exploration to create a crew, to have a bigger ship, more exploration, more investigations... there's a lot to discover, lots of challenges and sub-quests."

The developers still have a lot of work ahead of them in creating Beyond Good and Evil 2's massive adventure, and they want your help. By joining the Space Monkey Program, you'll be able to assist the team by testing and experiencing different parts of the game.

"It can be the controls, it can be the decisions, the online system, the trading system, all these things," says Ancel. "It's a way to experience people getting their feedback on the gameplay side, but also showing concept art, asking people for their own ideas or experience, traveling, whatever. I think they learn when they travel, because that's been the theme of the game: you travel, you discover cultures. And you take that, and you are richer because of this travel."

To sign up for the Space Monkey Program, visit bgegame.com.