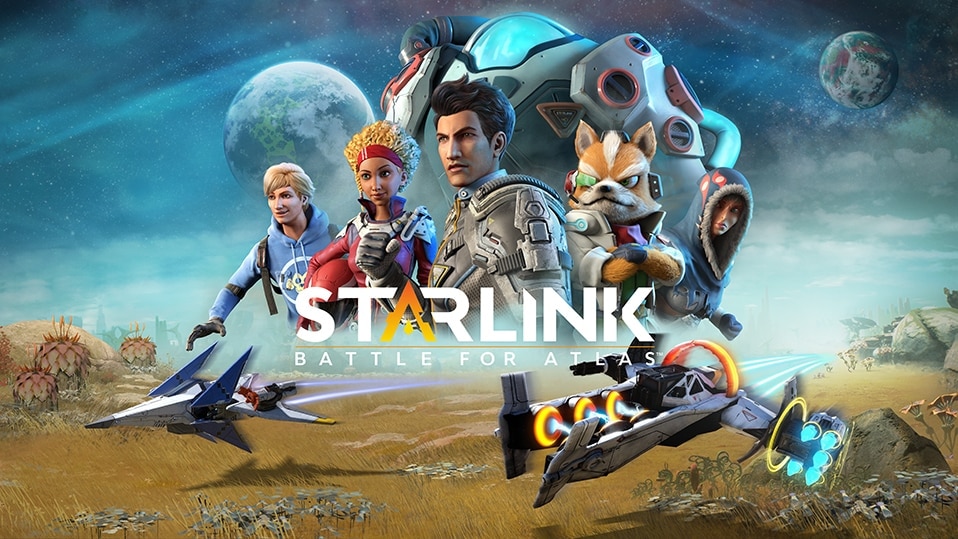 When Starlink: Battle for Atlas launches on October 16, a familiar face will join the Nintendo Switch version. Ace pilot and Star Fox Leader Fox McCloud and his signature Arwing fighter will be immediately playable as part of the Nintendo Switch Starter Pack, which includes a physical Fox pilot and the Arwing starship. We spoke with the Creative Director of Starlink Laurent Malville to find out how this collaboration came to be, how Fox fits into the world of Starlink, and whether or not you can do a barrel roll (spoilers: you can).

How did this partnership begin?

Laurent Malville: It actually all started at E3 last year. It was a really exciting time for us, we were so thrilled to show off the game and what we're trying to do with Starlink. We just had one private room to demo the game, and a few representatives from Nintendo came by. It was a real show highlight to show them the game, and they seemed to really like it. Then Nintendo came back again, with a different group of people to play the game. I remember one of them asking me, "Is it OK if I come back with a group of higher executives?" and I just said, "Yes! Yes, absolutely."

So they came a third and fourth time to check out the demo, to the point where we were finally showing it off to the President of Nintendo of America, Reggie Fils-Aimé. I'll never forget when he grabbed the controller and said, "This is a neat concept you have here." It felt like something was happening, but we weren't exactly sure what.

Fast forward, and we were invited to go to Nintendo HQ in Japan to present the game to Mr. Shigeru Miyamoto and the entire original Star Fox team. We travelled to Japan and presented the game, and it was an unbelievable moment – it was incredibly humbling. Not only did we present the game, but we pitched what we thought we could do with a Star Fox integration in Starlink. We told them that Fox could be fully integrated into the game and have his own special abilities and his own skill tree, like any of the other pilots. We also pitched the Arwing as a modular ship, just like all the other Starlink ships. We had 3D printed the Arwing that we gave to Mr. Miyamoto, and when we gave it to him he immediately started playing with it, removing a wing and placing the wing of another ship on it. It was something that had never been done before with such an iconic ship, so we were a bit nervous about the reaction. But he told us that it was a great thing for players to be able to do

After the presentation and conversation, we returned to Toronto to await word from Nintendo on the partnership. Obviously, they thought it was a good fit, and once we received the greenlight, we started integrating Fox McCloud into Starlink: Battle for Atlas.

How do you bring a character who is as beloved as Fox is into a brand new franchise?

LM: Obviously we love the Star Fox games, we love this IP, and we are big fans of this world. We put a lot of care into making sure that fans of Star Fox would recognize a lot of iconic things about the game. For example, the Arwing has some unique features to it. There's actually a mechanical piece on the starship that can move, and it's the only ship in our fleet that you can do that with. Also, even if you don't connect a weapon to the wings, you'll still be able to use the Hyper Laser of the Arwing

Did Nintendo give you any advice or feedback for the gameplay of Starlink when it came to Fox McCloud?

LM: The biggest thing that Nintendo told us was to really treat Fox as a guest in the Starlink universe. They really gave us a lot of freedom in terms of movement and what the ship could do. There were no big restrictions, it's been a fantastic partnership. We communicate with them regularly, and they're always giving us feedback. In fact, when we did the first concept art for the Arwing, we sent it over to them and their concept artists touched it up a bit to make it closer to the original. It's been a dream collaboration.

You mentioned that Fox is a guest in this universe, but it's possible to play the entire game as Fox, right?

LM: Absolutely. That's one thing that's super exciting, I think. In Starlink, you can swap pilots into any ship at any time, and the dialogue will adapt and change depending on the personality of the character you're playing with. Fox McCloud is compatible with everything in the same way. So even in the middle of a fight, you can switch Fox into whatever ship you're using, and you'll then be able to use Fox's unique abilities even when he isn't in his Arwing.

How does Fox fit in tonally with Starlink, and what adjustments did you need to make to the Switch version to accommodate him?

LM: We made sure that he would be really integrated in this world. We tell the story through the pilots, ships, and weapons that you choose to equip; this is your story. At certain points, you have cinematics in the game where you can see the characters evolving based on the conflict they're facing in the Forgotten Legion, and what we've done is integrate Fox McCloud into those cinematics to be on board the Equinox during those interactions. It was very important to us that we got Fox right.

In addition, there is an exclusive set of add-on missions included as part of the Nintendo Switch version.

How exactly will Fox impact the gameplay of Starlink?

LM: He has some very unique abilities that we're not discussing at this point, but what I can say is that Starlink is a deep RPG game where you collect and upgrade new parts to enrich your gameplay opportunities. So Fox's abilities will fit into that concept. Also, we made sure that the Arwing is just really cool, so that when you do a barrel roll with your starships, shots from enemies will be deflected.

We wanted players to be able to play Starlink any way they want, so every pilot can fly every starship and use any of the weapons. It all works together and it gives the player tons of freedom to get creative with how they approach any challenge they face in the game.

Starlink has split-screen co-op. If two players both have Fox as a pilot, can they play with him simultaneously?

LM: Yes, absolutely! As I mentioned, the goal was to provide freedom for players. So if two players have Fox and the Arwing, they can both play together. What's actually really awesome is that each time you connect a part to Starlink, you unlock its digital counterpart in the game on your system. So you can actually play co-op with someone playing with the physical starships, and your second player playing with the digital starships. So even if you don't have a second Arwing or Fox with you, both players can choose him as their pilot.

Did you ever explore any other platform-specific characters for the other versions of the game?

LM: You know, for something like this to work, it has to be a great fit. For us, Star Fox and Starlink was a match made in heaven. It's fantastic. These two IPs have a lot in common, but also have their own identities. It felt like a natural and exciting collaboration, and we're thrilled to bring Fox McCloud to Starlink: Battle for Atlas