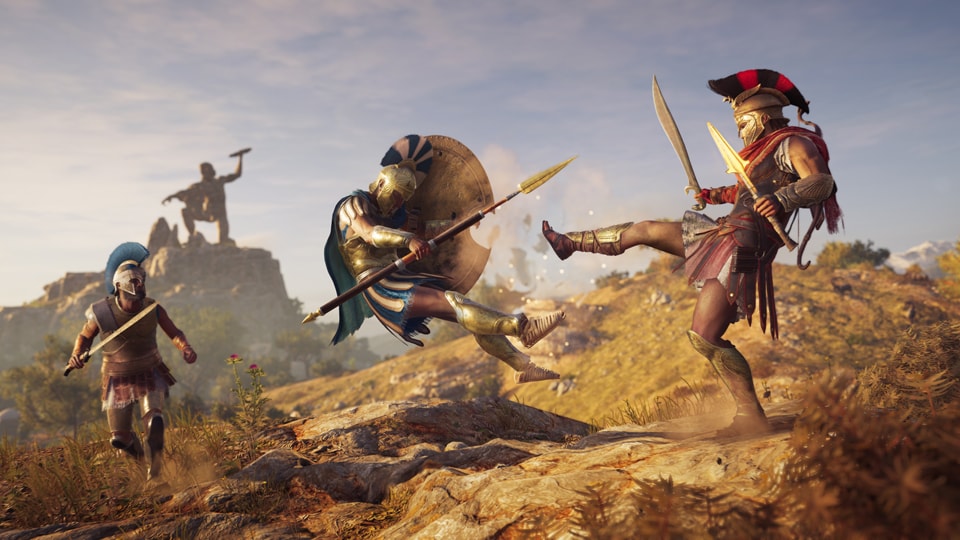 Assassin's Creed Odyssey takes a bigger step back in time than any other game in the series, bringing players to Ancient Greece in the 5th century BCE, centuries before the founding of the Assassin's Brotherhood in Egypt. Launching October 5 on Xbox One, PS4, and PC, Odyssey casts players as one of two Spartan outcasts-turned-mercenaries – Alexios or Kassandra – free to forge their own destiny during the Peloponnesian War, thanks to a big emphasis on player choice.

Beginning with the decision of which character to play as, Assassin's Creed Odyssey gives players the ability to make story-altering choices by navigating interactive dialogue, making or rejecting alliances, and pursuing romance. Assisted by a mysterious First Civilization artifact, the Spear of Leonidas, you'll also be able to unlock new, seemingly supernatural abilities as you journey through Greece, hunting secretive enemies, meeting famous historical figures, encountering myths, and fighting in huge battles between Athens and Sparta.

Ancient Greece is a huge open world – nearly half of which is water – and features a strikingly diverse landscape of mountains, cities, forests, and beaches. With that in mind, Odyssey also brings back open-world naval gameplay, putting you at the helm of a trireme warship and setting you loose to hunt pirates and other threats with a steadfast crew of archers. You'll be able to not only customize your ship, but recruit unique crewmembers as well, persuading allies and enemies alike to add their perks and abilities to your roster. You'll also be able to dive under the waves at any time, discovering undersea ruins and battling sharks as you explore.

Assassin's Creed Odyssey also builds on Assassin's Creed Origins' approach to gear; not only will you continually find diverse new weapons to wield, but you'll now be able to find, equip, and customize new helmets, breastplates, belts, greaves, and bracers, with each changing your mercenary's appearance as well as their stats.

Assassin's Creed Odyssey will be available in standard, Deluxe, Gold, and Ultimate Editions. The Deluxe Edition adds gear packs and a naval pack, as well as XP and currency boosts, while the Gold Edition includes the Season Pass and grants early access to the game starting October 2. The Ultimate Edition, meanwhile, contains the Season Pass and the Deluxe Edition content, as well as early access beginning October 2. Additionally, players who preorder the game will get an additional mission, "The Blind King."

Assassin's Creed Odyssey arrives on Xbox One, PS4, and PC on October 5, and will feature enhancements for Xbox One X and PS4 Pro. Stay tuned for more on the game, and more news from E3 2018.