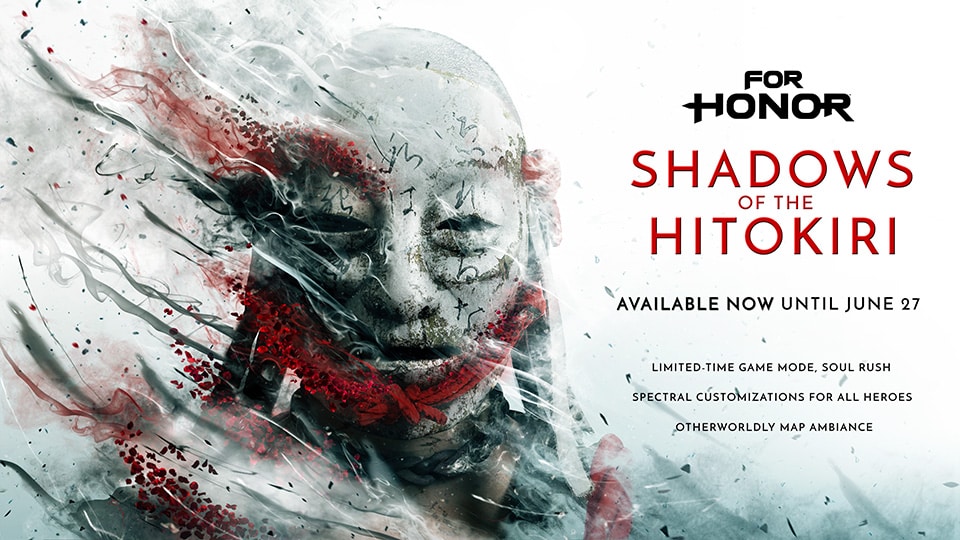 The Vikings, Knights, Samurai, and Wu Lin of For Honor have a haunting new way to do battle on PS4, Xbox One, and PC. Soul Rush, a new limited-time mode introduced as a part of the now-available Shadows of the Hitokiri event, pits teams of Heroes against each other in a fight to collect the most souls by killing soldiers.

It's not simply a race to kill the most soldiers, however. Each Hero has their own stock of souls, which count toward their team's total, and Heroes can lose their souls if killed by an opposing Hero – who then steals a portion of their souls. Furthermore, downed players will lose their remaining souls on revive, and the only way for their team to salvage their remaining souls is to revive the downed player. Securing souls is crucial to victory, and both teams can deposit their earned souls in designated points on the battlefield, increasing their team's score. The first team to 1,000 points will push the opposing team into breaking.

What is the Shadows of the Hitokiri event?

Vikings and Samurai clash in Kaidan, a dark village believed haunted by Sakura's victims. Fight in Soul Rush—a special Event Game Mode—to get exclusive rewards available only during this event.

When does Shadows of the Hitokiri start and end on each platform?

What other activities will be available during the event?

Furthermore, players can participate in weekly quests via the Arcade mode. In this new scenario, Ryoshi – town leader of Kaidan – was sentenced to death for murdering his family, and his demise brings a strange curse upon the village. Players are sent to root out the evil that lurks there.

Is there any special event loot?

Players can loot unique items during the event by playing the following game modes (PVP, PvAI and PM):

The following items can drop randomly at the end of all matches:

In addition, each of the 24 playable Heroes has one new weapon set made of three parts. One of these weapon parts may drop during any mode and in Scavenger Crates, as well as at the end of matches during the event. The weapons won't be available in the Shadows of the Hitokiri bundles.

Can I buy event content once Shadows of the Hitokiri is over?

Yes, you can still buy the Shadows of the Hitokiri Bundles until July 1 at 6AM PT. Only the Illustrious Outfit will remain available after the event is over.

What are Shadows of the Hitokiri Bundles?

Moreover, the price is calculated dynamically: If you own content already listed in the package, the price will be reduced according to the value of the content you already own. The Shadows of the Hitokiri Bundles will instantly unlock the following items for one Hero:

The For Honor team also announced during the Ubisoft E3 Pre-show that a spectator Mode will make its way into the game at a later date. For more information, check out our previous For Honor coverage.