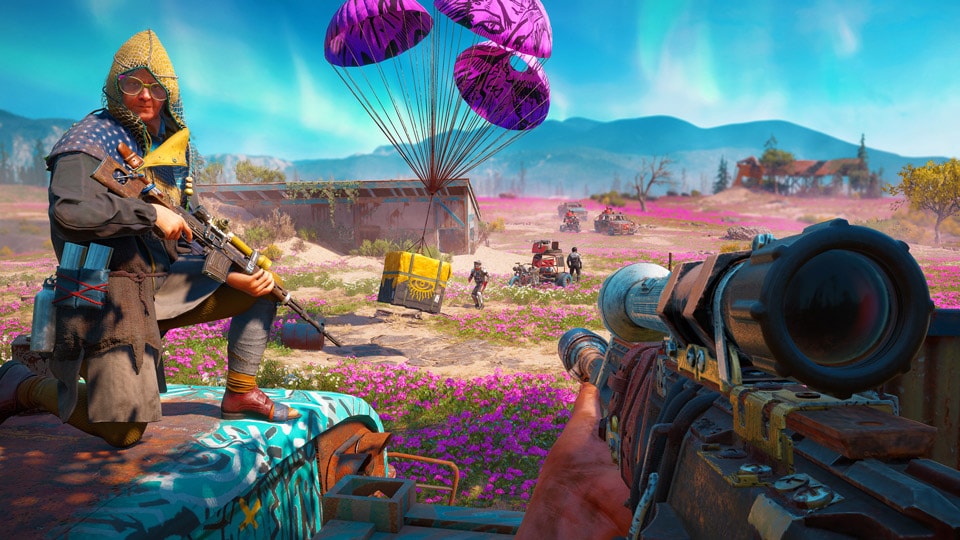 Far Cry New Dawn is out now, meaning you're free to find out what happens when you fire a circular saw blade out of a launcher at high speeds directly at a charging bear. Set in a colorful post-apocalypse, 17 years after the cataclysmic ending of Far Cry 5, you'll play as Captain of Security for a man named Thomas Rush, who travels the country rebuilding society. Hope County is your next destination; the only problem is it's crawling with Highwaymen, bandits who steal resources and oppress those weaker than them.

Their leaders are The Twins, Mickey and Lou. One is cold and calculating, while the other is brutal and impulsive, but both are deadly threats who must be stopped by any means necessary – even if that means seeking the help of The Father and his reformed followers, now known as New Eden.

If you're going to stand a chance against The Twins, you'll need to build up your homebase, Prosperity. By recruiting local Specialists to lend their unique skills to your base and gather resources, you'll be able to upgrade Prosperity, thereby strengthening your weapons, vehicles, and Guns for Hire. Speaking of Guns for Hire, Hope County is home to expert fighters and unstoppable animals who make powerful allies when fighting against the Highwaymen. No two Guns for Hire are the same, ensuring there's one for every situation. Need some long-range support? Take Nana, the elderly sniper. Want to blow up as many things as possible? Roll with our old rocket launcher-toting buddy Hurk. Like to get up close and personal? Set out with Horatio, the massive bulldozing boar.

The conflict is not just contained to Hope County. The Highwaymen have terrorized the entire country, and if you want to use their own resources against them, you can travel to various locations across the United States on Expeditions – smash-and-grab missions in Highwaymen strongholds like an abandoned theme park, a wrecked aircraft carrier, and even Alcatraz Island.

The Highwaymen won't stop until they've completely siphoned Hope County of all its resources, and the only thing standing between them and that goal is you, your trusty Saw Launcher, and your ragtag group of Guns for Hire. Far Cry New Dawn is out now on PS4, Xbox One, and PC. For more on the game, check out our previous coverage.