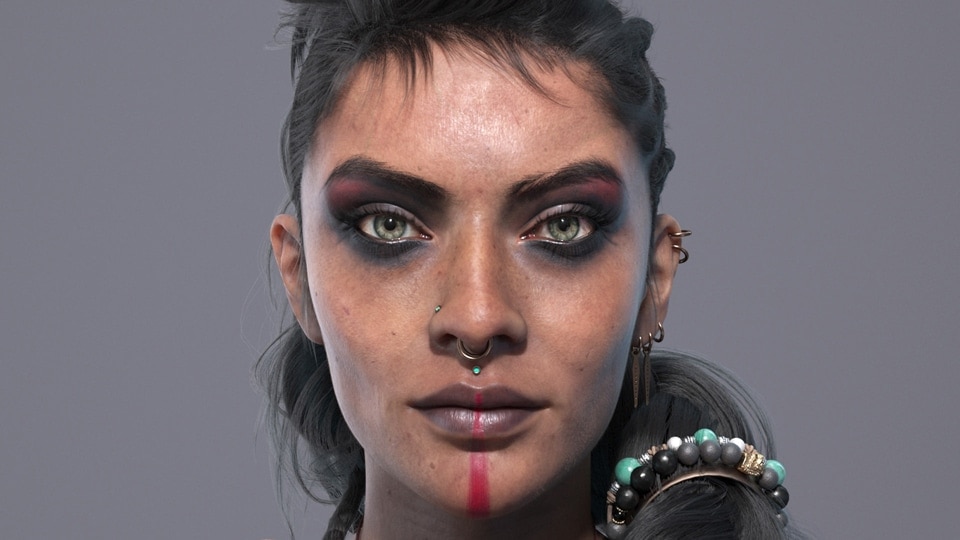 Beyond Good and Evil 2 fans got a closer look at the game this week in a special Space Monkey Report livestream that showed off the game's world, its characters, and the miraculous substance that makes its spacefaring civilization possible. Check out the video below for a quick recap and keep reading for more details:

The stream re-introduced fans to two of Beyond Good and Evil's female leads, beginning with early concept sketches of Jade, the first game's heroine, and revealing her dark past in Beyond Good and Evil 2. Dakini, the most famous space-pirate captain in System 3, returned as well with a whole new look. Previously glimpsed in dramatic close-up, Dakini now sports an Indian-inspired ensemble and glowing tattoos, along with a sword, jetpack, and pistol befitting a legendary zero-g swashbuckler.

The rhino-hybrid Mammagos also made an appearance, this time with a fully dressed, jetpack-equipped work-in-progress 3D sculpt. Mammagos can be found across System 3, and their services as mechanics – which include repairing ships and selling upgrades – are essential to the smooth operation of space-pirate society.

The real focus of Beyond Good and Evil 2, however, is your own space pirate, a fully customizable buccaneer you can create from a broad variety of human and hybrid templates. The stream showcased a variety of possible pirate concepts, showing off a range of ethnicities and species, different cultural influences, and decidedly sci-fi touches that included futuristic prosthetics and tattoos infused with the versatile element known as Diwalite.

Diwalite isn't just decorative – it powers nearly every facet of Beyond Good and Evil 2's spacefaring culture. Intelligent, extremely versatile, and able to adapt to many different functions, Diwalite forms the basis for everything from spaceship fuel to the creation of the sentient clones that populate System 3. It powers the shields and nanotech spacesuits that keep pirates protected, and it can create the holographic projections that decorate buildings across the colonized moon Soma. However, this miraculous substance comes at an immense human – or, rather, hybrid – cost.

Diwalite forms only on Naraka, the dangerous side of Soma that's continuously bombarded by meteors. Hybrid monkey slaves are dropped into warzone-like conditions, armed only with a special protective glove for harvesting the ultra-unstable raw element from newly impacted meteors. Once stabilized, the Diwalite is refined, stored at Soma's most secure site, and can be used mostly to create nanobots for a wide range of purposes.

As an otherworldly substance, Diwalite emits its own unique range of sounds – and to talk about how those sounds were captured, the stream welcomed Beyond Good and Evil 2's music designer, Raphaël Joffres, and its composer, Christophe Héral. Héral, who also composed the soundtrack for the original Beyond Good & Evil, Rayman Origins, and Rayman Legends, demonstrated the use of a cello to create the sounds of Diwalite's various states. Joffres described this as part of a leitmotif process, assigning the game's elements and places a distinctive sound identity so that players know when they're near.

Héral pointed out that fans of Beyond Good & Evil can expect to hear some of the first game's themes in Beyond Good and Evil 2's soundtrack, but in different ways. Héral also identified ethnic and cultural diversity as a focus of the soundtrack, with music that mixes authentic styles and futuristic sounds to imagine how culture might evolve and transform in System 3's far-future society.

Heral's compositions won't be the only music players hear throughout Beyond Good and Evil 2's world. The stream also took another look at some of the contributions to the game from its partnership with HITRECORD, which include music as well as in-game art. The partnership is expanding with a new project, this time inviting fans to create stories for a pirate talk-radio show. If you'd like to spin a yarn of your own for possible inclusion in the game, go to HitRecord.org/bgegame to get started.

For more on Beyond Good and Evil 2, check out our previous coverage.