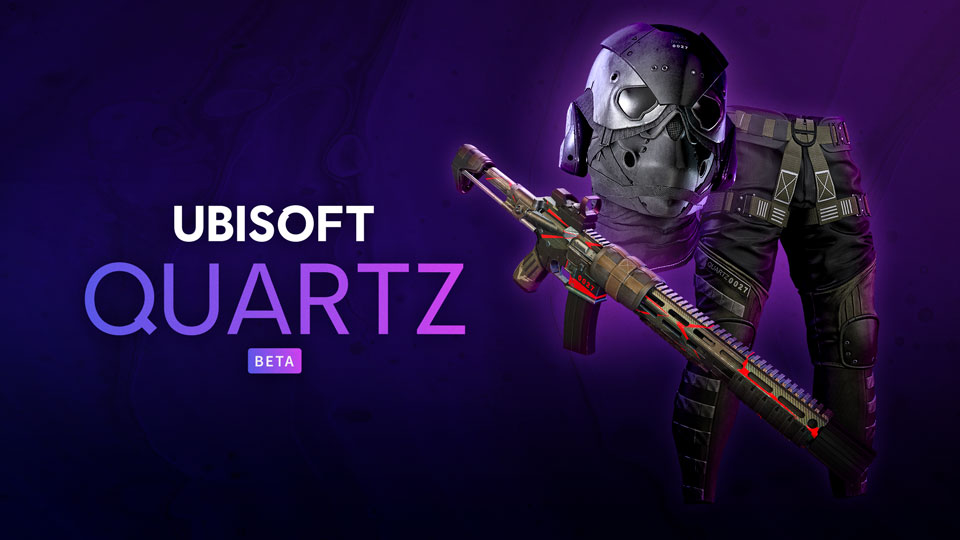 Ubisoft Quartz - What You Need To Know

This week, Ubisoft introduces Ubisoft Quartz, a new platform for players to get Digits, the first NFTs playable in AAA games and running on energy-efficient technology. Each and every Digit is a high-quality asset and a unique, collectible piece of a Ubisoft world. Developed by the Ubisoft Strategic Innovations Lab, Quartz is launching in beta with Ghost Recon Breakpoint for PC players on Ubisoft Connect. The first three Digits will be rewarded to early adopters for free on December 9, 12, and 15. To learn more about Ubisoft Quartz, we spoke to Blockchain Product Director Baptiste Chardon and Blockchain Technical Director Didier Genevois.

What sort of new experiences can blockchain and NFTs bring to gaming?

Baptiste Chardon: Blockchain’s decentralized technology enables gaming companies to move beyond current limitations set by more traditional technologies and lay the foundation of an ambitious and exciting new ecosystem that is, by design, truly community driven. While this can seem trivial at first, it is a totally new approach compared to the walled-garden digital environments we are used to, and it changes the videogame industry by introducing concepts like uniqueness and control, and thus value distribution in our game worlds.

This new approach can even, on a longer term, open up new opportunities such as interoperability between games or a never-before-seen level of autonomy for communities within game worlds thanks to the decentralized nature of the technology. In that sense, added on top of existing tools, we see blockchain as a means of placing back into the hands of players and creators the value they generate through their engagement with their games. We see this as an evolution of real-life possibilities in the digital space.

Why has it become such a major trend in recent months?

Didier Genevois: The digitization of our world has significantly accelerated changes in the way users and communities interact online. As blockchain technology matures, and as more and more talented people (creators, developers, entrepreneurs) take advantage of the opportunities it opens, it is starting to find more concrete uses in our everyday lives. Blockchain-based experiences are getting better and more promising, and we see signs of a paradigm shift. New concepts are getting mainstream, such as cryptocurrencies, crypto-wallets, tokenization, and NFTs, among others. Similarly, new business models are emerging, play-to-earn being maybe the most prominent, alongside the selling of virtual land. Obviously, we also see new roles for players and creators, like investors, collectors, teachers, syndicates, or unions.

There are a lot of discussions about how some blockchains and NFTs are harmful to the environment. Can you explain why that is, and how Ubisoft uses blockchain while remaining sustainable?

DG: We totally understand and share those concerns. This has been a key topic for us throughout our nearly five-year exploration of blockchain. It’s important to understand that there’s not just one single blockchain, or one single way to create NFTs. The technology has rapidly branched to evolve towards different, significantly more sustainable types of consensus mechanism to approve transactions. Most NFTs and cryptocurrencies you keep hearing about used to run on the early forms of blockchain, like Bitcoin and Ethereum, based on the Proof-of-Work protocol which generates this heavy energy consumption.

This is a key limitation we identified early on, which is why we have been looking for a better alternative before launching a large-scale blockchain project. It gave us the time to witness the fast-paced evolution of the tech towards a more sustainable form, Proof-of-Stake, which does not rely on complex computational efforts, and therefore does not incentivize extreme amounts of energy consumption.

We have been focusing on the exploration of this energy-efficient alternative, driving us to leverage Tezos, the Proof-of-Stake blockchain technology Ubisoft Quartz relies on. This type of blockchain achieves the same results while using significantly less energy than Proof-of-Work protocols. To give you an idea, a transaction on Tezos is equivalent to 30 seconds of video streaming, while on Bitcoin, it is equivalent to watching one year straight of video streaming!

We are committed to only use this type of energy-efficient solution moving forward. And as with all other technologies we use at Ubisoft, we are committed to continue our efforts to reduce our global footprint. 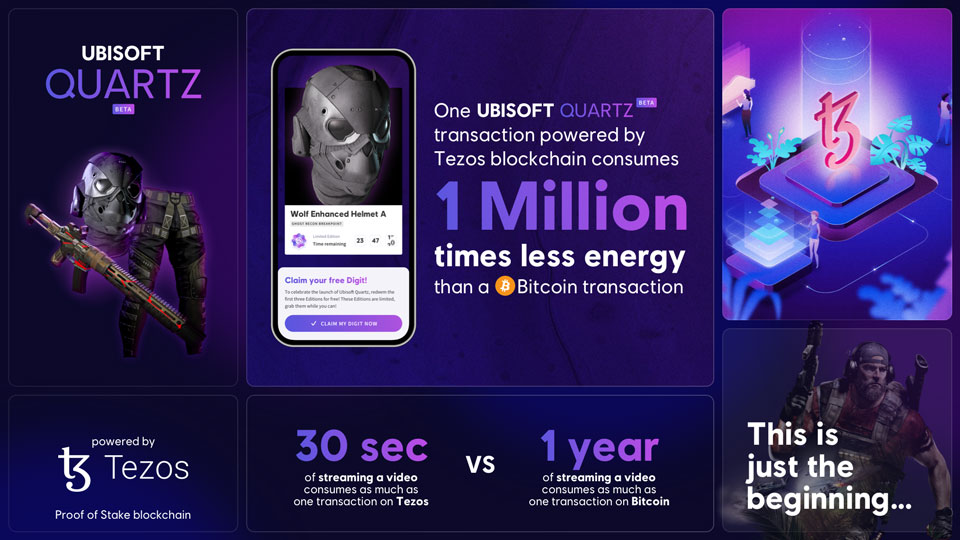 How did Ubisoft Quartz get started, and how is it different from what already exists?

DG: We’ve been exploring in this field for nearly five years, closely collaborating with the startup ecosystem through our Ubisoft Entrepreneurs Lab program and the Blockchain Game Alliance, and working on in-house research and development with various prototypes and initiatives. We had the opportunity to experiment with different use cases at different scales.

As for Ubisoft Quartz, the project started when our research led us to rethink how blockchain could provide a new value proposition to our players, around the concepts of provable scarcity and decentralized control. At the time, Ethereum was starting to be known to a mainstream audience. It was the very beginning of NFTs, and they brought the concept of uniqueness to digital assets, as opposed to having an unlimited supply of identical items. Similarly, the concept of “smart contracts” – agreements that have been codified inside a blockchain – opened the door to peer-to-peer, server-less and automated transfers between players, when until now, players’ inventories were bound to remain stuck in a single game. The combination of these two aspects of the tech made it possible to move forward on our vision that players should become true stakeholders of their games. Ubisoft Quartz and the Digits were born!

Will it change the fundamental gameplay experience for Ghost Recon Breakpoint players?

BC: Absolutely not. Digits are cosmetics only. They do not affect the gameplay in any way. It was key for us, from the very beginning, to make sure that this new experience would not unbalance the experience for our players, be they in PvP or PvE.

How do you concept and design Digits?

BC: The same way the Ghost Recon Breakpoint team carefully designs other items to go in the game. It’s always a push for authenticity that drives our artists working on the franchise mixed with the feedback from our communities, as well as the sense for details that allows those items to reach that high level of quality our players appreciate.

Will players still be able to buy skins and in-game items that aren’t unique?

BC: Of course! Ubisoft Quartz is a new experience that will co-exist with existing systems, most notably the current in-game store available in Ghost Recon Breakpoint. And keep in mind that the first Digits will be free for our players to claim.

What are you hoping to learn from the Ubisoft Quartz beta?

BC: Ubisoft Quartz is a first step and with it, we want to see how players interact with Digits. Between the uniqueness of each item, materialized by the serial number engraved on them, and the higher control offered to players to use their Digits or trade them with others in a safe and secure environment, Ubisoft Quartz offers new and exciting ways for our community to engage with Ghost Recon Breakpoint.