Far Cry 6 launches on October 7, and in addition to introducing us to the beautiful island nation of Yara and maniacal dictator Antón Castillo (played by Giancarlo Esposito), the game also shakes up what players have come to expect from a Far Cry game. With new storytelling methods, super weapons, gear, stealth options, horses, and more, Far Cry 6 looks to be unlike any Far Cry before.

Following some extended hands-on time with the game, here are the six things we’re most excited about in Far Cry 6:

While past Far Crys have switched between silent and voiced protagonists, they’ve all shared one thing in common: all cutscenes take place from a first-person perspective. Far Cry 6 has a new approach to storytelling, pulling the camera out to a third-person perspective. Now, not only can you see Dani, but she or he is fully voiced and customized depending on the gear you have equipped (more on that later). The new cinematics bring a level of depth and humanity to the story, and we now see and hear exactly what Dani is feeling at any given time. It’s easier to care about Dani when you see them evolve from an ex-military refugee to a reluctant guerrilla to a one-person revolution.

Speaking of Dani, one of the more subtle but wonderful additions to Far Cry 6 comes with the music that plays over the radio while driving. The music itself is nothing new for Far Cry, but Dani’s singing along is. Who among us is immune to a little car karaoke while driving alone? The fact that Dani just can’t help but sing makes them even more loveable.

Resolver weapons may showcase the resourcefulness of guerrilla fighters, but why use a nailgun to get the job done when you can use a back-mounted rocket launcher? Created by guerrilla master Juan Cortez, Supremos are wearable pieces of equipment that allow you to customize your playstyle even more. 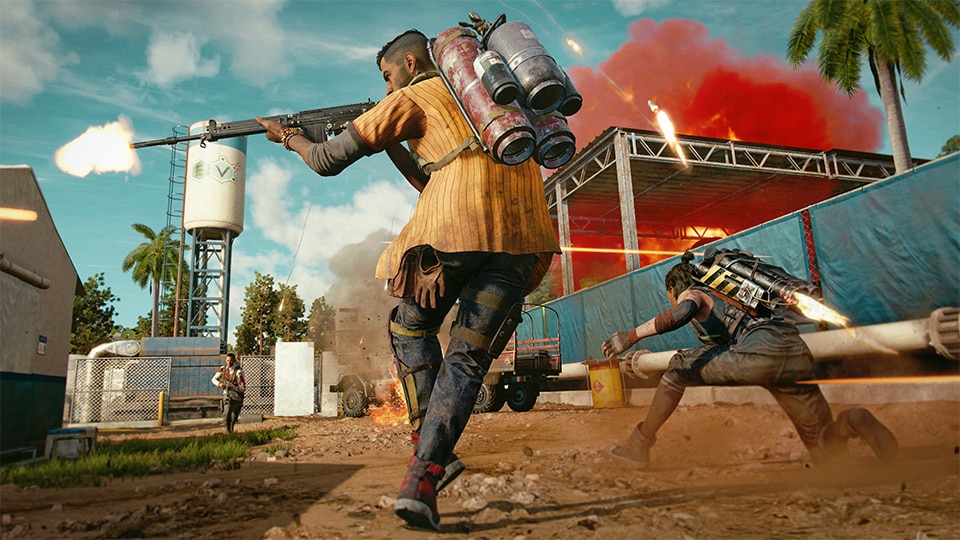 It all starts with uniquely devastating active abilities: Want to disable a security system? Equip the Volta Supremo and unleash the El Impulso EMP ability. Maybe you’re playing co-op with a friend, and want to play support by equipping the Medico Supremo and using the Zona Medicina ability to rapidly heal yourself and nearby allies, or revive yourself if you’re downed. If you find yourself swarmed with enemies, the Furioso Supremo's Fuego Loco ability unleashes an explosive ring of fire in an area around you, and allows you to air-dash to get out of tricky situations. These powerful active abilities operate on a cooldown timer, and can be charged by causing chaos around you.

In addition to their powerful abilities, Supremos allow you to equip gadget mods and standard mods. Standard mods customize things like your throwable carrying capacity, your Supremo’s recharge modifiers, and the power and range of its effect. Gadget mods equip throwables like baseballs to lure guards, Molotov cocktails and grenades to deal some damage, or EMP grenades to take out security cameras and vehicles. No matter how you choose to play Far Cry 6, there’s a Supremo for you.

A guerrilla is only as good as their gear, and in another new feature for Far Cry 6, players can outfit Dani with head, chest, leg, foot, and wrist gear. Together, these five pieces of gear allow you to further customize your Dani to your playstyle. For example, equip the Scrounger Helmet, and you’ll be able to tag containers through walls. The Rioter Vest gives you added protection against armor-piercing rounds (another new addition to Far Cry 6 is specific ammo types that affect targets differently), Parkour Shorts give you’re a speed boost after sliding, while Parkour Shoes improve your movement speed generally.

One mission gave us a flamethrower and tasked us with burning down one of Castillo’s Viviro tobacco farms. Seasoned Far Cry players know that being reckless with a flamethrower can result in some accidental player burns. Luckily, we were given Fuego Mitts, a piece of wrist gear that automatically puts out flames should we ever catch fire. If your playstyle leans more towards creating infernos, these gloves come highly recommended.

Remember how we said that Dani will appear in cutscenes however you choose to outfit them? Well, good news for all you fashionistas out there: If you love the bonuses of a piece of gear, but it doesn’t quite match the aesthetic you’re going for, you swap visuals between any two pieces of the same category gear that you’ve acquired to get the stats you want and the looks you need.

Weapons of the Revolution

Like Dani’s gear, weapons in Far Cry 6 can be bought from special dealers, or looted – er, liberated – from caches scattered around the world. Once you get your hands on them, you just need a workbench, the right resources (mostly gunpowder), and a little Resolver spirit to adapt them for a variety of specialized purposes. That old hunting rifle you found might do the job well enough on its own, for example, but what if you were to trick it out with armor-piercing rounds, a makeshift suppressor, and a magnifying scope? Now it’s an essential tool for staying undetected while punching through the helmets of all the armored guards patrolling a prison camp. (Just try not to fire it too much too quickly, or the suppressor will overheat and you’ll start making some serious noise.)

Each firearm has different upgrade slots that vary from weapon to weapon, but include muzzle attachments, optical or pointer mounts, and even different ammo types. Some weapons also feature slots for special mods that add passive buffs, like improving reload speed or letting you move more quickly while aiming, and you can customize them with new paint jobs and even dangling charms. Since Dani is able to equip up to three full-sized weapons and a sidearm, you can carry a small arsenal customized for any situation and target – quiet or loud, armored or unarmored, infantry or tanks.

Of course, you’ll probably want to reserve one of those slots for a Resolver weapon. Like the Supremos, Resolver weapons are jury-rigged monsters that pack a massive punch and are most useful in extreme situations. The Tostador, for example, is a flamethrower good for torching Castillo’s armored poison-sprayers, while the Zeusito packs an EMP burst that – depending on how long you charge it before releasing the trigger – can stun an enemy, explode an enemy, or take down a chopper with one well-aimed blast.

Horses: Because Walking is for Chumps

Cars, trucks, and motorcycles are plentiful (if somewhat ancient) in Yara, and after your first few missions, you’ll even get an armored, customizable sedan that you can summon at any time. But guess what? You can’t pet an armored sedan, and they don’t cut as majestic a figure while you’re riding them across high cliffs (in fact, that’s probably ill-advised in general). They’re also not great for navigating steep mountainsides or dense forests, and while you can drive them across Yara’s more uneven, rockier terrain, it’ll be a rough ride.

This is where horses come in: Nimble. Sure-footed. Pettable. Horses are often the best solution for getting around Yara’s dusty back roads in a hurry, and their ability to go places most vehicles can’t makes them a great way to reach hidden rebel hideouts and haunted caves. They’re also surprisingly strong and durable, so be careful where you point them if you don’t want to smash an object or person. 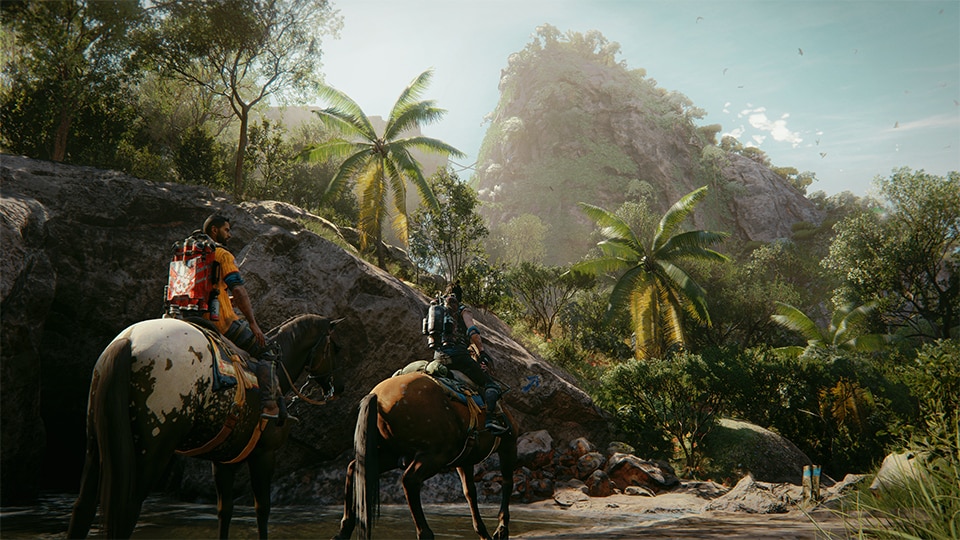 Riding horses works a lot like controlling Dani; just push forward for a graceful trot, or click the analog stick (or designated sprint button/key) to go into a full gallop. Best of all, they’re everywhere – you can steal one from a mounted army officer, for example, or find them just hanging out near villages. You can also go to one of many marked “horse pickup” points across the map to summon one – and if you take a shine to a horse you’ve found in the world, you can even bring it to one of these pickups to save it for later.

Castillo’s forces may be brutal, but that doesn’t mean they’re always out for blood. In fact, many won’t start shooting unless you give them a reason to – like, say, getting too close to them. With a weapon in your hands.

A key part of being a guerrilla is being able to blend in amongst the civilian population, and in Far Cry 6, that’s as easy as keeping your guns holstered and safely out of view. So long as you’re not holding a firearm, trespassing in a restricted area, or otherwise acting suspiciously, Castillo’s soldiers usually won’t pay you any mind – although, given how many of them are escorting prisoners or brutalizing villagers, you might want to pay them some mind. (In that case, keeping your guns holstered will keep their suspicions at bay until you’re in a good position to take them down.)

Also, not all of Castillo’s troops are true believers – some are just in it to feed their families. And if you can identify these would-be double agents and approach them with a bribe, they might clue you in to valuable resources, mission opportunities, and other cool stuff that’s worth a few pesos – and worth keeping them alive. 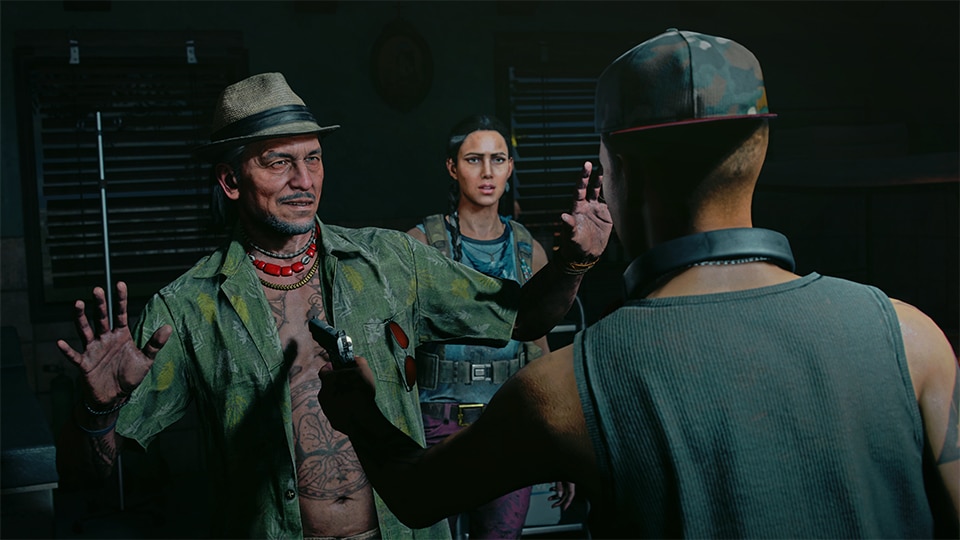 This is just a taste of what’s waiting for you in the oppressed tropical nation of Yara when Far Cry 6 launches on October 7 for Xbox One, Xbox Series X|S, PS4, PS5, PC, Stadia, and Amazon Luna (and will be available as part of a Ubisoft+ subscription). Get ready to unite guerrilla factions, wield absurdly powerful improvised weapons, and fight your way back to the capital city of Esperanza to finally restore freedom to its people. For more on Dani Rojas, Libertad, and their explosive struggle to unseat Antón Castillo, check out our dedicated Far Cry news hub.