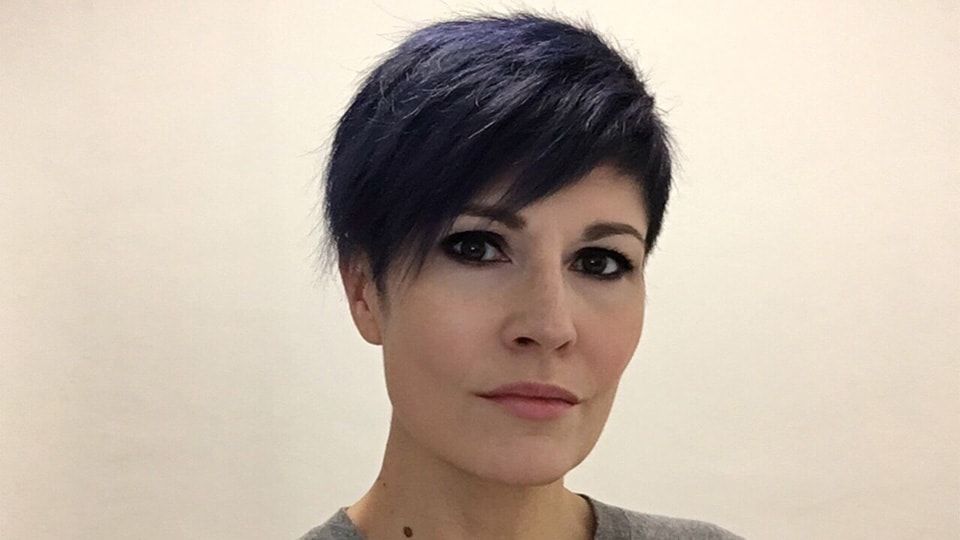 Cristina Nava has always had an eye for adventure and action. As a child she dreamed of becoming a circus trapeze artist and an explorer. Her interests ultimately led her to become a writer for comics, TV, film, and – beginning in 2008 – videogames at Ubisoft Milan. The 10 years that followed would see her assume many roles at the Italian studio, including designer and lead QA tester, before she finally settled into her current position as an associate producer.

Despite being a gamer all her life, Nava never expected to work in the game industry. But when the opportunity to work in her own hometown as a writer at Ubisoft Milan presented itself, Nava jumped at the chance to work in a field she cared about deeply.

You've spent most of your time at Ubisoft Milan as a writer and producer, but tell us about your other roles.

Cristina Nava: I worked as a commentary designer for a short period of time on some of our casual games. As for QA, I worked on an augmented reality game, Rabbids Alive and Kicking, which was a very funny game. Both experiences were fairly short compared to my time as a writer and producer, but they gave me another kind of perspective and allowed me to thoroughly understand all of the phases and issues that can present themselves during development. It was really a good form of training for being a producer.

How and why did you decide to make the transition into producing?

CN: Before I arrived at Ubisoft, I had been a writer for more than 10 years. I've always been quite good at organizing and communicating, and both my director and my producer noticed that ability and asked me if I was interested in trying producing. I was eager to try to help the team achieve our goals in any way. I sometimes make the joke that I am a former professional writer gone to the dark side (laughs).

Producing a game is a narrative, an adventurous one: it has a prologue, a beginning, a middle, an end, and an epilogue. You put the right people in the right roles, and you help write the story of the development of a game.

What about the role of producing makes you call it the "dark side?"

CN: It's a joke I make because usually, there is a sort of dichotomy between being a creative and being a producer. Producers have to act as watchdogs to make sure that people in more creative fields are able to stay on track and complete our goals on time.

As a former creative, I like to joke that working as a producer is "evil," but in reality, my vision of being a producer is exactly the opposite. To be a good producer, you have to be of as much help as possible. I need to be able to help as many people on the team achieve what they want, and to allow them to be as ambitious as they can within our time and resource constraints. I want the creatives, especially in the conception phase, to feel as free as possible to express themselves and create something new, original, compelling, and fun for the players. At the end of the day, we are producing entertainment, and we want players to enjoy what we make. And to enjoy ourselves while making it!

The nice thing about having a background as a creative writer is that it allows me to understand the creative needs and processes and, occasionally, to move between teams if needed. For example, while we were developing Mario + Rabbids Kingdom Battle, I moved back to the narrative team for two years, to help shape up the narrative structure of the game and its story. It was nice to be able to jump back and forth between the organizational role of a producer and the creative role of a writer when needed. But at this point in my life, I remain a producer at the core.

What about the role of producer appeals to you?

CN: I like seeing things come together. I like overseeing the entire development of a game from conception and prototyping through to full production, polish, and debug. Being a producer has allowed me to work in all phases of a wide variety of games. I've worked on party games like Just Dance, on military shooters like Ghost Recon Wildlands, and on strategic combat adventures like Mario + Rabbids Kingdom Battle. Being able to oversee the production of such a diverse collection of games has been very compelling for me. I also enjoy presenting – and representing – our games at game shows and awards. It's so wonderful and satisfying to meet fellow developers, people who are curious about your work, and exchange knowledge and experience. And the players! Watching them at live events, playing and having fun with a game you have spent so much time and sweat developing, is both so exciting and heartwarming.

Why is it important for a producer to be a good organizer and communicator?

CN: You cannot be a producer if you are not a good communicator. We have to foster communication not just within our own studio, but with other studios all over the world.

Oftentimes, when we come across what initially seems like an insurmountable issue, it's usually the product of people not properly communicating with one another. A good producer is able to recognize that and get ahead of the problem.

As a former writer, how did you develop the necessary skills to be a good producer?

CN: I think, partially, it's just who I am as a person. But as a writer, you have to be able to tell a story. It's always a matter of building a narrative, and really, everything is a narrative. Producing a game is a narrative, an adventurous one: it has a prologue, a beginning, a middle, an end, and an epilogue. You put the right people in the right roles, and you help write the story of the development of a game. Having been a storyteller in my previous life obviously helped me in this adventure. I've also worked on creative teams and with film crews before I started at Ubisoft, and learning how to work on a team is very important as well. Everything I did before I arrived here helped me be better at what I do now.

CN: I think they are similar. The dialogue between those forms of entertainment is constant and undeniable. There is a mutual exchange that benefits all. Despite of the similarities though, there is an inherent difference between comics, cinema, TV, and videogames, and it comes from the audience involvement: You read comics, you watch movies and TV; you play video games. Those verbs highlight the different approaches you need when you write and produce a movie or create the narrative structure of – and development of – a videogame. Many developers have such diverse backgrounds, and videogames, as a relatively new form of art, take a lot from those other forms of entertainment.

Why do you think you never considered a career in games despite having grown up playing them?

CN: It wasn't because I thought it wasn't a career, but because I was not in that mindset when I was younger. I have always had many interests, and I used to have difficulty deciding on what I wanted to do. I knew I wanted to entertain an audience, and that I wanted to create something that people could enjoy. I thought that structuring a narrative would be the way, or that making a movie would be the way, but when I saw the opportunity to work in videogames, the light sort of went on for me.

In Italy, there weren't many videogame companies 10 years ago, so as soon as I saw the chance to work at Ubisoft Milan, I realized that a new horizon was opening up. It was a new challenge for me, and one that satisfied my need for adventure so well that I wanted to stay here and make it a proper career.

Having worked in so many diverse roles at Ubisoft, how would you describe your experience here?

CN: It's really a very friendly and open environment. I sometimes say things like "I left my umbrella at home" when I actually mean I left it at the office. Ubisoft, and Ubisoft Milan in particular, is a great big extended family. Ubisoft for me means opportunity, challenge, growth, both on a personal and professional point of view. It also means, especially in the last few years we have spent developing Mario + Rabbids Kingdom Battle and Donkey Kong Adventure, that you can grow up having a dream and see your dream come true. Imagine you are a kid playing Super Mario and flash-forward that kid is now a game developer making a Mario game... with the Rabbids... in partnership with Nintendo! This could only happen at Ubisoft. And I'm telling you this while polishing a certain bronze mask we just won at the BAFTA Chidren's Awards (laughs).

What advice would you give to younger women who are curious about working in videogames?

CN: I understand that there is still a problem of visibility, equal opportunity, and role models in the industry. Many young women don't think they can make it in male-dominated fields. We see examples of negative role models, but we really have to be fearless and willing to confront challenges and new adventures, and to engage in fields which are traditionally the preserve of men.

I was used to working with teams that were predominately men before Ubisoft, so it's always felt normal to me. Moreover, Ubisoft has been a very welcoming place for me since the very beginning. But I realize that in other contexts many women still struggle to feel welcome in their workplace.

So, as advice to younger women: Don't be afraid to put yourself in a challenging situation, because that is how you grow up both personally and professionally. And this is how you make the environment around you grow and evolve for the better.

We need to help younger women realize they are capable of doing anything they want. But they need to want it first. We have to cultivate their will. I love boxing, and still practice it in my spare time to burn off some energy, and I think I've learned a lot from it: hard training, dedication, motivation, respect for your opponent.

I had the wonderful luck of being raised by parents who never once made a distinction between what girls and boys could do. I was encouraged to play with whatever I wanted. As a little girl, I played with soldiers, cars, Meccano, and dolls all at once. It's a matter of being given all the choice you can as a kid. My best advice would be to not adhere to stereotypes.

At Ubisoft, we put a greater effort into appealing to women, and giving visibility to other women who may be interested in working in games. This series itself is a good example of that.