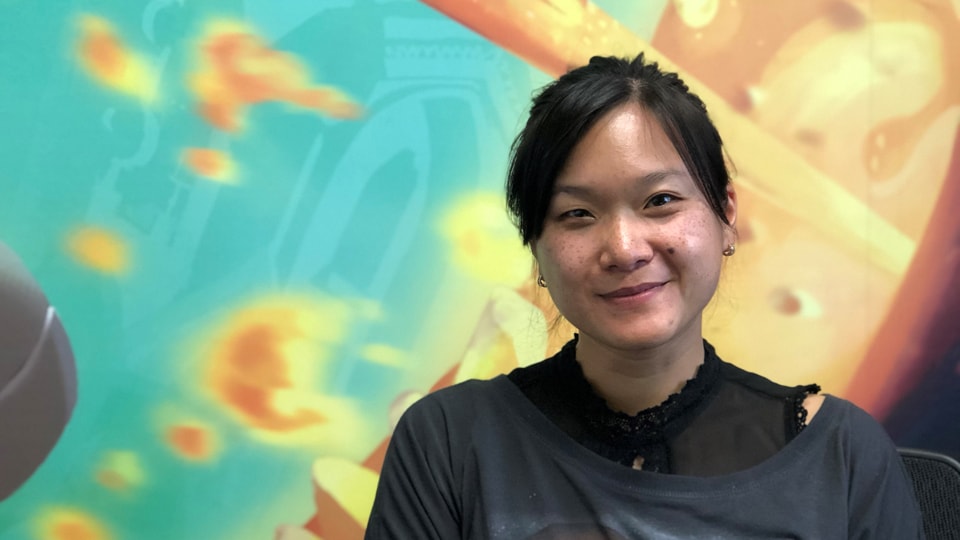 In every corner of the games industry there are women working on the games we love, but too often they don't get the respect and recognition they deserve. So, in honor of Women's History Month, and International Women's Day, we are proud to present a new series of articles highlighting the achievements of women in creating games. In an effort to help close the game developer gender equity gap, as identified by the IGDA, "Women of Ubisoft" will be a recurring series providing in-depth interviews from some of the incredibly talented women and non-binary folks behind our games.

For the first entry, I sat down with Kaiwen Young, Senior UI/UX Designer working on South Park: The Fractured But Whole at Ubisoft San Francisco. Growing up in Austin, Texas, it never occurred to Kaiwen that she could work in games. While she originally hoped to be a writer, she pursued advertising and even classical piano before coming to games. A ravenous RPG fan, Kaiwen told me that she appreciates games with well-built and believable worlds as well as mobile games for their ability to reach broader audiences. Before coming to Ubisoft to work on South Park: The Fractured But Whole, she worked at EA Maxis, PlayFirst, and Pogo.

As a Senior UX/UI Designer, her job is to make sure that the information the player needs is readily available and easy to understand. This is accomplished with multiple methods including playtests and eye tracking.

What prepared you most for this job?

I kind of want to say "life." I mean, watching 25 seasons of South Park definitely helps! (laughs) I was a big fan of the show for a long time and kinda fell off for a bit, but then came back. It definitely helped that I played lots of games and watched my friends and family play games. Some studies on the properties of objects and what you can do with them from classes in college really helped as well.

Actually, back when I was temping as a teenager, I worked the front desk for a conference that turned out to be for Edward Tufte. I didn't know who he was at the time, but he is an early influential information designer. He came by to say hello, and handed me three of his books. I tried to digest as much as I could, and that all sort of stuck.

You know, people always thought my brother was going to get into games and be an engineer, and that I was going to be a scientist or something. It's funny because we actually ended up switching. You're told "No, you can't do that." I think at some point after I had spoken to a lot of female gamers and friends working in QA, I just decided to go for it. I said to myself, "I love games, I've played enough of them, why not?" I think my skills and my point of view are valuable.

Is there anything else you want people to know about you?

I feel like I've been lucky in a lot of ways. I know that I'm in the minority, rather than the majority to be able to say that there's always been strong females in the places that I've worked, groups that formed tight supportive relationships. And I feel that even in the early days, I've been able to work on products that considered women and people of different backgrounds.

Were any of those female coworkers role models for you at any point in your career?

When I was first hired to work at an AAA studio, my art director was a woman of color. I really looked up to her and the way she would make her voice heard, how she was involved in managing the team in the day-to-day. Honestly, I've been really lucky to have been hired at studios where there have been good proportions of women to men.

**Do you think your art director being a woman of color was particularly important? **

Definitely. I think it was important to see someone who was so capable and communicated well and, to put it bluntly, seeing someone who looks like me doing well was huge for me.

**Do you think representation is important in games? **

Yes. I think media representations often push along culture. They can open up people to different stories provided by people who aren't like them. It helps people consider points of view that are different. I think, as a woman of color, that the entertainment industry has progressed a lot.

Have you ever felt like video games weren't for you, or weren't designed for you?

Not really, there are plenty of games that aren't for me and that I don't have an interest in, but that's true for books, artwork, TV, or movies. There's always going to be media aimed at someone who is not me. I think that gamers as a whole are really lucky to live in the time that we do, because games have come a long way in being more inclusive and delivering different types of experiences.

What is one piece of advice you'd give to young women who want to do what you do?

Be really curious about life. Be open to lots of different viewpoints. I always say, in terms of UX, that "You are not your user." There are a lot of different ways of looking at things and approaching things, being confused by things, failing at different things. It takes patience and openness to try to understand, or at least to have compassion for people.

What's the best advice you've been given?

To be confident, to be secure in the ways I thought. I think a lot of times, early in my career, I would doubt myself. I wouldn't speak up if I didn't understand things. I think it's important to trust in your own doubts, trust in your certainties, and trust in your teammates to support you, just as you'll support them.

What are some of your accomplishments that you're most proud of?

Being part of new technology in the past. I really treasure the experiences of working on different platforms, whether they be iPhone, iPad, PC, or console. I love the different challenges presented in each platform, and think that in every game I've worked on, we've done something new or interesting.

Do you feel like your experience as a minority in this industry has been different from your male peers?

Yes, especially in the early days. There were questions about the legitimacy of your experience in terms of where you came from, or what games you played, or where you'd like a project to go. That's why I think it's so important to speak up, even if your ideas and opinions are completely different than everyone else's, because you come from a different place.

How do you want to be treated in this industry?

A philosophy I have in life is to treat everyone with respect. In a way, treating everyone the same, but with the caveat that you should be open to viewpoints different to yours. And that goes for people of every gender, orientation, race, and age. And even if you don't understand someone else, I think it's important to be quicker to react compassionately than to judge.

**Can you share some of your short-term or long-term goals? **

In the short-term, I want to finish up South Park as best we can. We're working on DLC Three, so I'd like to go out with something really good that people love.

For long-term goals, for a while now I've been trying to figure out ways I can contribute to the way games can be uplifting, helping people find a better version of themselves. It's awesome how Ubisoft teaches people to play guitar with Rocksmith, for example. Right now, we're working on an accessibility pass for South Park that will make it easier for disabled gamers to play. That's been really eye-opening, seeing research and understanding the role games have for people who are disabled and the ways games can be a huge part of their social lives.

Have you ever had a professional failure? If so, what?

As a UX designer, iteration is so important. For every game I've worked on, there have been failed ideas. Sometimes even fully developed ideas don't work. Maybe eye tracking shows that something important is being missed, or menus are difficult to use when you're not the person designing them. There have been many small or sometimes not-so-small failures on that front, but iteration always leads to a better place.

How can men in the industry support women?

I feel male colleagues can respect the different ways that people communicate. I've always appreciated—especially in a big meeting—when there's space for dialogue. I think it's important to make room for different opinions, for people who don't share the same viewpoint, and also realize that there are many different communication styles in meetings. It's great when men—or anyone else—are observant of the people who may hang back or people who are in thought and work to get everyone's voices and ideas heard.

How do you feel women can support each other in the industry?

Women can embody respect towards one another, towards the team, towards the process and be patient with growth. We're in a better place than we have ever been and I think it's important to listen and to hear each other's stories. Whenever you're trying to carve a space—whether it's a safe space or a creative space—for women, it's good to recognize the stories of success as well as the stories of failures and be patient with each other and the process.