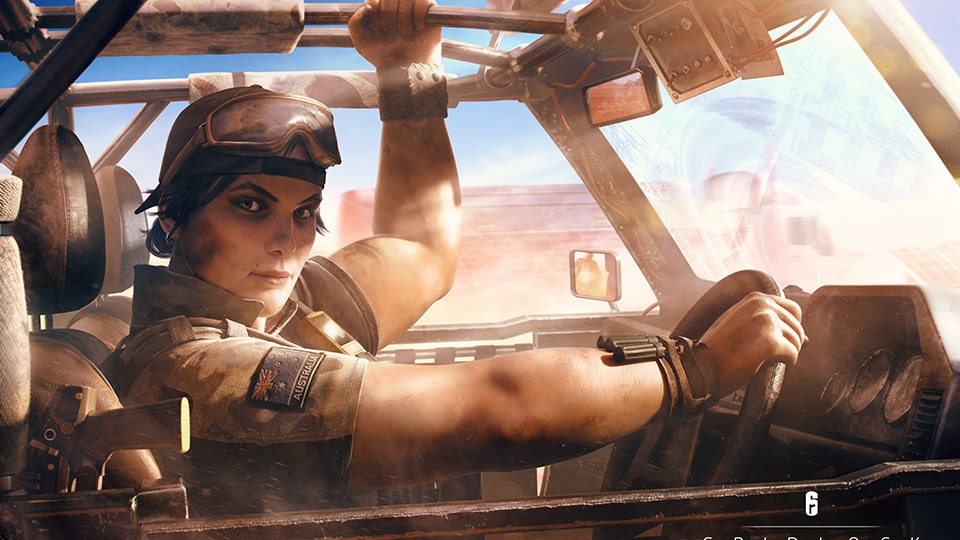 A new season is coming to Rainbow Six Siege, kicking off the fourth year of ongoing support and regular updates for the tactical first-person shooter. Operation Burnt Horizon brings the action to Australia, introducing Gridlock, an Attacker who can deploy damaging clusters of spikes on the floor; Mozzie, a Defender who can hack the attacking teams' drones and use them for his own intel-gathering; and a new map called Outback. Read on to learn more about how each Operator's gadget works, and get some insight into the new map layout to start planning your strategies.

Gridlock bolsters the attacking team's area denial capabilities with her Trax Stingers. Throw one on the ground, and it immediately starts deploying clusters of Defender-damaging spikes in a radial pattern. Each Stinger produces quite a lot of spike clusters, allowing you to really jam up a staircase or a hallway, or cover a large area of a room. Attackers can traverse the spikes without hindrance, but Defenders who dare to tread on them will take damage, be slowed down, and make noise.

Trax Stingers allow Gridlock to obstruct flanking routes, or surround a planted defuser with a defensive perimeter. Toss a Trax Stinger through a hatch or between floorboards to exert some pressure from above, or lob one into an area where you know a Defender is hiding to put them in a prickly position.

Though Jäger's ADS gadget can't affect Gridlock's gadget, Attackers can simply destroy the clusters of spikes with bullets, explosives, or melee attacks. If they manage to shoot the Stinger device while it is deploying, they can prevent some or all of the clusters from spawning. Keep in mind, though, that all of these actions are noisy, and you risk alerting the attacking team to your whereabouts. And since the attacking team now includes Gridlock, with her F90 assault rifle or her M249 LMG, you might want to think twice about attracting attention.

On the other side of the Siege is Mozzie, a Defender who figures there's no reason to bring his own drones to the fight when he can just steal someone else's. Armed with his trusty Pest Launcher, Mozzie can hack the Attacking team's drones and make them his own. Yes, this includes Twitch drones. He can capture them in two ways:

Each Pest can hack one drone and add it to Mozzie's fleet. Once a drone is hacked, Mozzie is free to do drone things, like drive, jump, use shock charges, tag enemies, and park it in sneaky spots. He can't pick drones up, and if he drives one outside for more than a few seconds, he'll lose the hack and the drone will be lost, even to its original owner. Each drone Mozzie keeps in play is a valuable new intel source that joins the Defender camera feed for all to see.

Defenders who are used to shooting drones on sight will be happy to know there is a special glowing outline to show them which drones are hacked by Mozzie, while Attackers will have to look for the telltale blue light to recognize turncoat drones, or bring IQ along to sniff any traitors. Attackers can regain access to the camera feed of a hacked drone with a Dokkaebi hack, but the drone will remain under Defender control. In order to avoid losing drones, Attackers can watch for the red warning light in their drone view that indicates a Pest is nearby, and this is another way that Mozzie makes Attackers burn more time and attention on drones. And while their attentions are elsewhere, Mozzie is more than happy to take advantage with his P10 Roni automatic pistol, or his Commando 9 assault rifle.

The new map in play is Outback, a roadhouse in the middle of the sunburnt country where travelers rest and refuel before venturing out into the bush. It's comprised of three main buildings joined together in an L-shape. Each one has color-coded accents to help you get oriented as you navigate from the garage (blue) through the restaurant (green) and into the motel (yellow). There's a stuffed shark, a rodeo bull, and a host of other landmarks to help with callouts, as well as plenty of breakable walls and floors for our two new Operators to destroy using their Super Shorty shotgun sidearms.