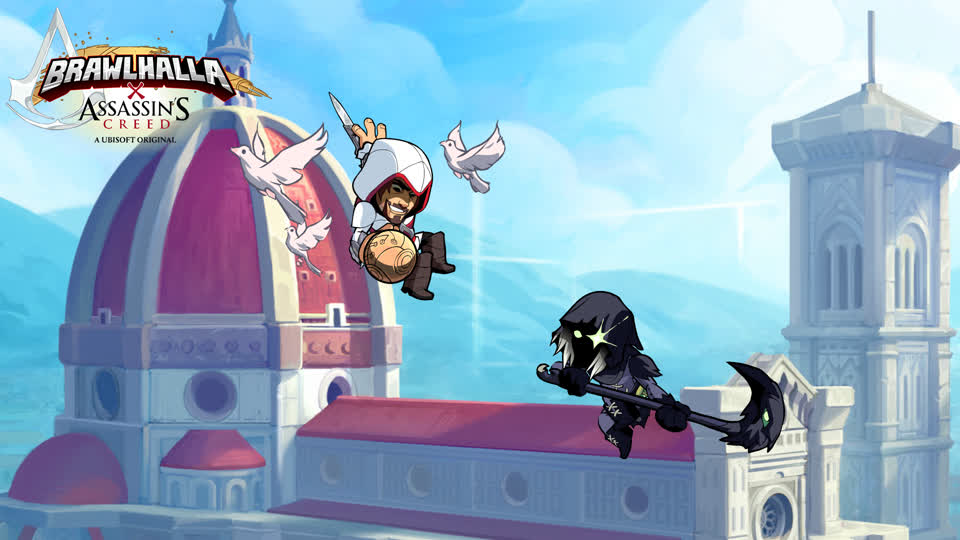 Today, Brawlhalla adds two new characters to its roster: Ezio Auditore da Firenze and Eivor. Ezio, an Italian nobleman from Florence and leader of the Assassin Brotherhood, joins as a full-fledged Legend. He wields the Auditore Blade Sword, which slashes enemies with grace, and the Apple of Eden Orb, which projects holographs to distract and attack opponents. At launch, Ezio has three skins: Revelations, Armor of Brutus, and Asgardian. Each skin is available for 140 Mammoth Coins, and each includes two Weapon Skins.

Eivor, a Viking raider with a unique connection to the Norse god Odin, is an Epic Crossover for Brynn. Available for 300 Mammoth Coins, they are equipped with Varin’s Axe and the legendary Spear Gungnir. Also available for purchase as part of the Epic Crossover are the Leap of Faith emote, Desynchronization KO effect, and eight Avatars including River Raid, Assassin Crest, Freerunning, Abstergo Industries, and more. Two free maps have also been added to Brawlhalla’s rotation: Florence Rooftop and Florence Terrace.

A new free game mode, Bounty, has also been added to Brawlhalla. Bounty, part of a new Animi Training Program hosted by Abstergo Industries, is a free-for-all style brawl where the first person to get a KO becomes the Bounty, taking twice the damage until they are KO’d. The Legend who KO’s the Bounty scores extra points – but becomes the Bounty themselves. The Bounty mode also brings three new Brawls of the Week: Rooftop Rumble, Ghost Rooftop Rumble, and Assassin’s Brawl. All items will still be purchasable and playable after the Epic Crossover event ends, including the new game modes and maps. Brawlhalla is free to play on Xbox Series X|S, Xbox One, PS5, PS4, Switch, PC, and iOS and Android. For more on Brawlhalla, check out its Street Fighter Epic Crossover, or read about the Faerie Queen Legend.