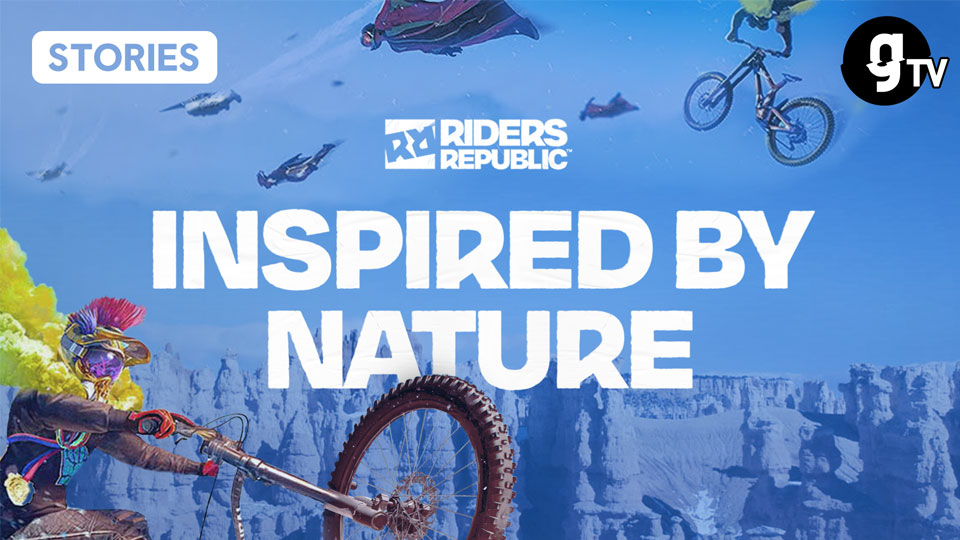 The stunning virtual playgrounds of Riders
Republic are often so
rugged and breathtaking, it's easy to forget that such places exist in the real
world. But as the new exclusive documentary from gTV shows, the great outdoors
can be even more incredible when experienced firsthand.

Developed by Ubisoft Annecy, Riders Republic invites players to an exhilarating
social playground, where they can experience the thrill of outdoor sports in an
open and densely populated world.

While nature spent millions of years carving out the landscapes of American
National Parks, the team at Ubisoft Annecy didn't have that luxury. They scouted
the locations and used satellite images to create the environments. Then, with
the help of Associate Game Director Boris Maniora and his team, they crafted
them into courses that are fun to play.

This documentary from gTV records Maniora's first time visiting Bryce Canyon and
Zion National Parks after working on the game. He reveals how ecology inspires
him, and how he hopes that games like Riders Republic can help people reconnect
with the natural world.

We sat down with Maniora following the documentary shoot to ask him about his
favorite parts of the experience.

What surprised you the most when you first experienced the National Parks in
real life?

Boris Maniora: We started by visiting Zion National Park, and my immediate
reaction surprised me: I wasn't particularly impressed. The mountains' red and
white hues are very pretty, but the height was not as imposing as I thought they
would be. But you should never stop at your first impression, and when I did the
Angel's Landing hike, it was a truly unique experience! The verticality of the
cliffs is breathtaking from the summit. On the other hand, Bryce Canyon struck
me from the first second we arrived in its gigantic amphitheatre of rock
formations. The colors have a soft and poetic beauty, coupled with the unreal
image of thousands of stone columns. It gives you the impression of being in a
dream.

Having worked on the game, did you already feel familiar with Bryce Canyon and
Zion when you arrived on the ground?

BM: The game’s map was created directly from satellite images, so the
terrain of Zion and Bryce Canyon is the same in the game as in real life. I was
surprised at how accurate it was. I could recognize all the mountains,
viewpoints, and areas of interest almost as well as a tour guide would. I had a
strong feeling of "déjà vu," which allowed me to appreciate the places even
more, and to soak up their energies.

How did it feel to see the Wall of Windows in Bryce Canyon looking so similar
to the one in the game? Your team did a remarkable job on this.

BM: The rock formations of Bryce Canyon, specifically the vertical columns
called "hoodoos" and the walls, were some of the most important technical and
creative challenges in Riders Republic. It was meticulous work to "carve" these
rocks faithfully, while twisting reality to turn them into a playground. For
example, we flattened the tops of the hoodoos to allow cycling, and lots of
passages and "bridges" were created between the different levels to allow easy
and fluid navigation, and to make it as fun as possible for our players.

Finally, we dug holes in the walls to create maximum opportunities for air
sports, such as wingsuits, rocketwing, and paramotor. I would also like to
express how much I admire the team, to have achieved such a feat. I’m really
proud of what we achieved together. When I was in front of the Wall of Windows,
I saw myself in the wingsuit, playing to score as many points as possible.

Do you think that games like Riders Republic can help players become more
interested in nature and ecology?

BM: Today, we’re really missing a connection to nature. Unfortunately, many
people don't have the opportunity to have this connection, or simply lose it
over time. Riders Republic puts a spotlight on spaces of indescribable beauty,
but also of a disconcerting fragility. Despite the fact that we chose to
highlight National Parks, which are by definition "protected," these ecosystems
are still vulnerable to climate change. I hope that by including these magical
spaces in our game, it will push some players to ask questions about nature and
ecology, themes that we can never talk about enough.

It looks like you did a lot of hiking. Do you have any advice for first-time
hikers?

BM: I would have loved to have done even more! The only advice I can give
is to take your time. Staying on-site as long as possible, doing different hikes
– no two are ever the same. Give yourself time to soak up the atmosphere, the
sounds, the smells. I was lucky enough to witness an incredible sunrise over
Bryce Canyon from Sunrise Point – those sorts of experiences are priceless. It's
not about taking a photo for Instagram and heading to the next place. It’s an
experience to live fully, because they are places out of time, and you have to
experience them as such.

gTV is Ubisoft’s media channel dedicated to video gaming culture. It showcases
all the ways videogames influence our world, from sport and fashion to arts and
science. This documentary launched this week on gTV's YouTube channels
worldwide.