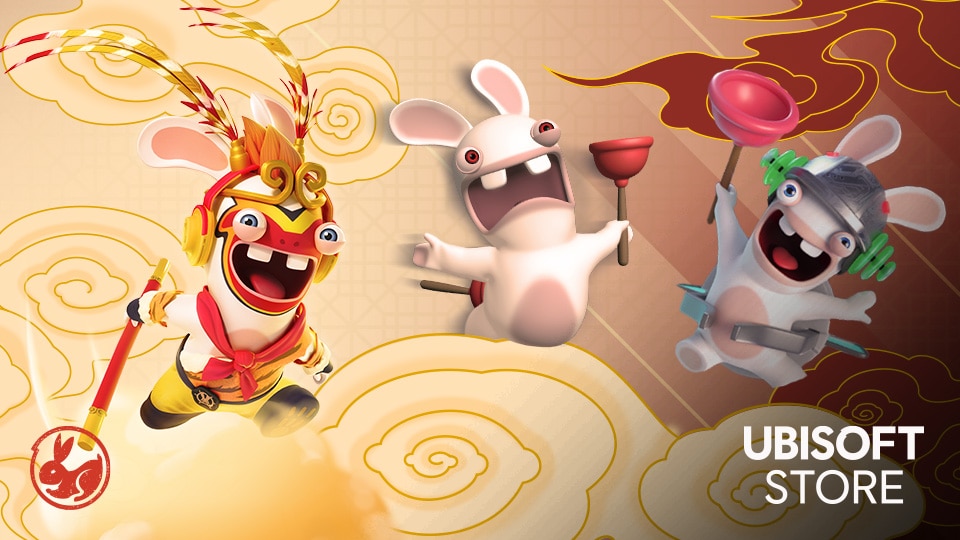 Celebrate the Lunar New Year With a Rabbid Retrospective

The Lunar New Year is January 22, marking the start of the year of the Rabbit, and Ubisoft is celebrating with the Rabbids. These mischief-makers are the subject of many multiplayer party games, as well as a couple of tactical RPGs. In honor of Lunar New Year, take a look back at how the Rabbids went from Rayman enemies to the stars of their own games.

Rabbids Go Home is the next major installation in Rabbids lore, and is an action-adventure story instead of a party game. In the story, the Rabbids must steal everything on Earth and stack it all into one huge tower that they can climb to reach the moon. However, it wasn't until Raving Rabbids: Travel in Time that the rabbit-like creatures introduced another staple feature: the time-traveling washing machine. The Rabbids use this apparatus to try and change the course of history, whisking players to major historical events and landmarks like the sinking of the Titanic, the arrival of the Statue of Liberty in New York City, composing Beethoven's 5th symphony, and the Pony Express, among many others. Each location has a minigame that either makes the Rabbids responsible for an event, like knocking off the Sphinx's nose, or changes history, like pulling the sword from the stone instead of King Arthur.

The Rabbids continued their chaotically fun misadventures on Earth through a number of titles, including Raving Rabbids: Alive and Kicking, Rabbids Land, and Rabbids Rumble. Released in 2012, Rabbids Rumble was the franchise's first foray into turn-based strategy games. It featured 102 playable characters, each with their own fighting class and abilities, and Rabbids would face off in an arena, duking it out until one is KO'd.

In 2017 a surprising partnership with Nintendo kicked off the Rabbids latest series with Mario + Rabbids Kingdom Battle. In this game, a scientist has created a SupaMerge device, which can combine any two things into one. When the Rabbids crash her lab in their time-traveling washing machine, they
accidentally activate the SupaMerge and get merged with characters from the Mario franchise, leading to the creation of Rabbid Luigi, Rabbid Peach, Rabbid Mario, and Rabbid Yoshi. They must work together with their Mushroom Kingdom counterparts to save the world from other invading Rabbids, facing fierce enemies like the Pirabbid Plant, Phantom of the Bwapera, and Bwario and Bwaluigi. Kingdom Battle uses a tactical grid during combat, elevating the turn-based strategy gameplay from Rabbids Rumble.

Their washing machines spun up more trouble in Rabbids Party of Legends, the multiplayer party game inspired by the classic Chinese novel Journey to the West. The game has 50 minigames and supports up to four local players at once, spans four chapters that takes players on a journey with the Monkey King as they gather relics that will allow them to go home. Originally exclusive to China, Party of Legends was so popular that it was localized for all regions in June 2022.

Most recently, the Rabbids went on a trip to save the galaxy in Mario + Rabbids Sparks of Hope. The game features Rabbid Mario, Rabbid Luigi, Rabbid Peach, and Rabbid Rosalina (plus their Nintendo counterparts), as well as a new Rabbid character named Edge. Not only do the Rabbids fight Cursa and attempt to eliminate the Darkmess, but they also develop an important new skill: the ability to talk. There are still plenty of "bwah" puns throughout the game's dialogue, but players can also hear Rabbid Mario saying things like "Let's not get tough. Except a-me!" before a fight, Edge scoffing "It's about time" when she levels up, or Rabbid Peach shouting "#healingjourney" on using her special ability.

The Ubisoft Store is having their Lunar New Year sale from January 19 to February 1 and are celebrating with discounts on Rabbids games and so much more. They are also giving away Rayman Raving Rabbids on PC for FREE until January 23. For more on the Rabbids, check out this developer interview on teaching the Rabbids to talk, or learn how the team designed Sparks of Hope's weapons to be unique. Stay tuned to Ubisoft News for more updates.