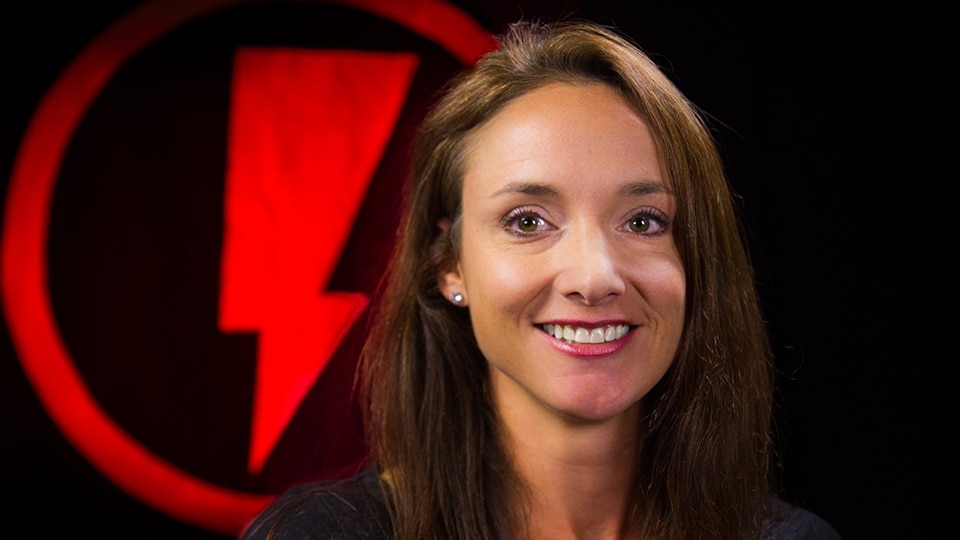 As a 19-year veteran at Ubisoft, Elizabeth Loverso has worked on some of the company's biggest franchises, from Tom Clancy's Rainbow Six: Rogue Spear to Tom Clancy's The Division. Now, as the Vice President of Product Development at Red Storm Entertainment, a Ubisoft studio, she oversees all aspects of game development within the studio. While her job includes listening to pitches, working with outside partnerships, and giving feedback on playtests, Loverso particularly enjoys doing things that enable her teams to bring their visions to life. Whether it's acting as a sounding board, helping them find resources, or campaigning to get them more time, enabling her teams is one of Loverso's favorite parts of the job.

Having worked on the original game, Loverso really enjoyed playing Tom Clancy's Ghost Recon for its multiplayer. More recently, she's been spending time in social VR games like Werewolves Within and Star Trek: Bridge Crew, both of which were developed by Red Storm. She is also a fan of horror games.

Did you always know you wanted to work in games?

Elizabeth Loverso: No, actually. I originally studied communications, so I had always thought about PR and marketing. The funny thing is, I never really gave that field a shot (laughs). My brother-in-law worked in computer networking, and he had done the networking for the offices of Acclaim Entertainment while I was looking for a job. He helped connect me to them, and I ended up getting a job as a production assistant there, working on NBA Jam. It was while I was there that I realized how enjoyable it was to make games. I also found that I have an ability to solve complex problems and understand production issues. That really hooked me into project management, and the overall production-management aspects of creating games. I sort of happened into this career 24 years ago, and it was just a natural fit.

When I first came to Red Storm, it was to run the operations department. At that point, I had experience with launching new products, setting up and running game testing, product manufacturing, and first-party relations from my previous job at SouthPeak Interactive. Building on that expertise at RSE allowed me to take over management of all first- and third-party relations and development, and eventually I transitioned into managing all of our internal product development.

Without having studied game development, what do you think most prepared you for this job?

EL: My degree in communications gave me a stepping-off point, with marketing, PR and legal media education. I understood contracts and negotiations and public speaking, and had lots of experience working on group projects. My project management certification, as well as my experience as a production team assistant certainly lined up well to prepare me for what I do now. I've also been playing games all my life; I had an Atari and started out playing games like Pong. I spent hours at the arcade playing Centipede, Ms. Pac Man, and Q*bert, which solidified my passion for gaming. All of that led me down the path of being able to understand and manage development teams for a videogame studio.

As someone who has been in the games industry for more than 20 years, how do you feel about the gender equality gap? Has it been noticeable for you?

EL: Oh, absolutely it is noticeable. I would say it is probably in part due to the environment that was created in the earlier years, with garage development and male gamers being interested in making their own games. Nine times out of 10, when we open a job, the people who apply for the job are mainly men. Most of the jobs require math and science backgrounds, and women haven't really been pushed into math and science the way men are. I think that with the arts and design areas, we do see more female applicants, and I don't know if it's because women are more drawn to the visual arts, or they're traditionally interested in more creative fields, like writing. With the growth in women gamers and universities offering gaming curriculums, we are starting to see a change. I think, over time, we'll start to see that numbers increase and balance out.

Do you think there is anything that can be done to help facilitate that change?

EL: I do think that in public education, we can go a long way in encouraging girls to excel in science and technology areas. Another great way to reach females is in creating games that attract and inspire female gamers, telling the stories of female developers and showing how Ubisoft thrives and encourages diversity in our games and our work environment. We can also encourage camps and organizations that focus on girls in gaming, so that they understand that it's not only about the entertainment of playing games, but a thriving industry with careers that they can pursue.

"I think at Ubisoft, everyone can thrive, but I think the women here do extremely well because of the type of environment and the people who run this company."

Have you been able to witness the advantages of having a more diverse team?

EL: Absolutely. I think a good example is that diverse teams want to create games for a broader audience to enjoy, not just male gamers. You get realistic female characters with the correct movement sets, and models of the female characters that are believable or perhaps heroic - not just stereotypes. I think you also get a richness in the storytelling aspects of the game. When you have people who come at storytelling from a diverse background, it enriches it. Overall, with diversity on the development teams, we create better experiences, and take a more creative look at the aspects of the games, and it keeps them from being stereotypical or sometimes too hardcore.

What accomplishments are you most proud of?

EL: I'm most proud of the fact that Red Storm really helped establish the tactical shooter genre and multiplayer gaming. We're known for our attention to detail and realism in our first and third-person shooters, as well as the richness of our online multiplayer experiences. Most recently, Red Storm enabled the awesome multiplayer gaming in The Division and its DLC content. I think overall we certainly brought a great portfolio and multiplayer expertise to the Ubisoft family that has enabled and inspired teams worldwide to create fantastic games.

What advice would you give to a young woman who wants to work in games?

EL: I'd say that it's always good to pursue your passion and to figure out what aspect of game development appeals to you. Do they want to be a writer? A sound designer? A programmer? An artist? Ultimately, go to school to learn your craft, and look for opportunities to do internships. The easiest way to get your foot in the door is to find your passion, make sure you have the right training and capabilities, and then try to intern for a game studio. A lot of times, it's the practical hands-on experience that ends up landing you a job in the industry.

I don't think traditional universities encourage internships enough. We have a lot of recruiting efforts aiming to get college grads in here to help build their talent. Ubisoft takes great pride in partnering with schools globally to help find and train talent for our development studios.

As a VP, I'm sure you have plenty of people who look up to you, but did you have any female role models?

EL: My mom was a big role model for me. My mom has always worked; she's in sales. We often had to tag along with her on sales calls, and we got to see what she did, and her hard work pay off, and how she interacted with people. That was crucial for setting me on the path of pursuing a career I am passionate about.

I also really look up to some of the women in politics in general, because most of them work in a male world. I've noticed that they don't hold back. I certainly appreciate the fact that they speak their minds, they stick to their convictions, and stand up for what they believe in. I think for women in general, they are great role models.

Also, when I was still at Acclaim, we had quite a few VPs who were women. One in particular, Holly Newman, was one I really looked up to. She was very much a no-nonsense type of person. I liked the way she was direct, opinionated and could get things done. She really stood out in a male-dominated industry.

You mentioned admiring women who are "direct" and "stick to their convictions." What about those qualities appeals to you?

EL: I am certainly a "direct" person, I tell it like it is for better or worse sometimes. I am certainly flexible, but if I believe we need to change direction or re-think a design choice I will push to make that happen if it is best for the product. I prefer to work with people who are of a like mindset and stick to their guns when needed. I like to surround myself with people who tell me the truth and aren't afraid of taking critique and giving it as well. These qualities foster working relationships of trust and respect which are very important to me. We can achieve great things when we are not afraid to speak our minds, concede when necessary, and not be afraid to get our own hands dirty making good ideas into great games!

Has anything about your time at Ubisoft stood out to you?

EL: I think at Ubisoft, everyone can thrive, but I think the women here do extremely well because of the type of environment and the people who run this company. They care about their games, they care about their employees, and they've empowered the women who work here so that they can accomplish anything. That's been one of the best experiences for me, and the reason why I'm still here. Ubisoft empowers women to make great games.