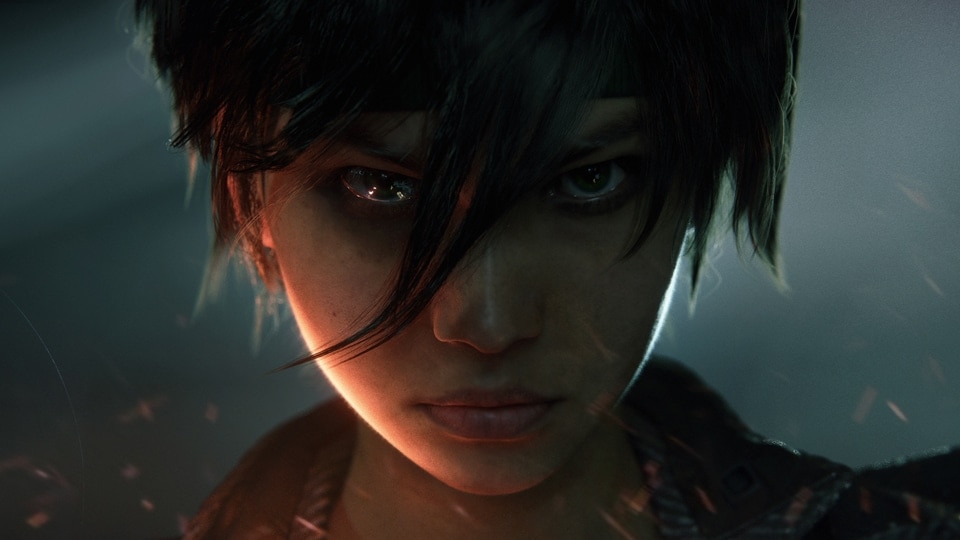 Beyond Good and Evil 2's demo at E3 2018 was all about scale, seamlessly taking its characters from exploring the detailed depths of a colonized moon to flying above it, and then to orbiting it. This year, we were able to see what sorts of things you'll be able do on a terrestrial, aerial, or orbital scale, beginning with the exploration of a subterranean temple by a co-op team of two space pirates.

A prequel to the first game, Beyond Good and Evil 2 is set near the end of the 24th century in System 3, a star system colonized by settlers from Earth. When the first humans arrived in System 3, they found they'd become sterile, which forced them to begin cloning themselves (and their human-animal hybrid slaves) in order to survive. So when you begin playing Beyond Good and Evil 2, you'll start by creating your own cloned space-pirate captain. Every inhabitant of the system comes from the strains of DNA brought by those first colonists, which you'll be able to use when creating your human or hybrid character. For example, the two pirates on screen looked like wildly differentiated versions of Shani and Knox from the trailers – and they were, sort of. They'd been heavily customized to create distinct looks, but were cloned from the same genetic lines.

Set n Ganesha City – a Hindu-founded metropolis on the continent of New India, on the moon Soma, orbiting the gas planet Dyaus on the outskirts of System 3 – the demo was a glimpse at a society shaped by a combination of powerful corporations, religious manipulation, and its environment. Soma, for example, is locked in a synchronous orbit with Dyaus, keeping one side of the moon facing the gas planet at all times. This protects that side from the ravages of space, enabling ecosystems to flourish and convincing the inhabitants they're favored by the gods. The side that faces out toward space, meanwhile, is a barren hellscape bombarded by frequent meteor showers.

The corporations in control of System 3 breed their hybrid slaves for specific roles – primates, for example, are literally born to be miners –and send them to this highly deadly environment to harvest resources from the meteors, telling them they're on a divine mission while also secretly spreading a myth that if one of the slaves finds a very specific gem, they'll be able to escape and win their freedom. It's all about keeping the slaves productive and under control – and it's that control that you'll work to escape as a space pirate, eventually amassing several ships and recruiting a crew of like-minded misfits.

To do that, however, you're going to need some firepower, and so the demo began with the two pirates mock-fighting each other. Every player-created space-pirate captain carries four basic tools at all times: a gun, a sword, a shield, and a jetpack. And they can all be equipped with Augments, special cores that can be found throughout the world, and which impart different effects. The player-controlled pirates demonstrated a few by adding slowdown, paralysis, and pushback effects to their shots and blasting each other around a room.

Splitting off in two different directions – you don't necessarily need to stick together to play together – the two pirates eventually encountered a team of scientists and soldiers, experimenting on a bound ape hybrid. Hiding on a walkway above them, one of the pirates whipped out her spyglass, a device that – much like Jade's camera in the first Beyond Good and Evil – can scan and impart a wealth of information about whatever it's pointing at. Looking at the people below, for example, we could see what species they were, which corporation they were affiliated with, and which Augments they were using.

The pirates charged from different directions, prompting their enemies to scatter. Throwing down a dome-shaped slowdown trap, the human pirate caught one of the scientists as they were fleeing and moved in to unleash a flurry of damage – which another scientist rapidly healed, demonstrating that they're the ones to take down first. With them out of the way, both pirates moved in to dispatch the soldiers at close range, using a combination of shield defense and sword strikes to clear out the remaining resistance.

Once the room was clear, the two scanned the captive hybrid – who was still alive, despite not being in great shape – and learned that he was formerly a mechanic. Freeing captives like this, incidentally, is one way you'll be able to recruit new talent, adding their skills to your crew and making you just a little more formidable.

For now, however, the two pirates left the temple-turned-lab and found a pair of waiting vehicles: a hoverbike and a little starfighter. The chimp pirate took the starfighter and zoomed off, while the human pirate hopped aboard the hoverbike and began exploring Ganesha City. Founded on religion, the city is filled with Hindu iconography and murals, and is heavily stratified; since the city is built around flight and filled with massive skyscrapers, the poor huddle in shantytowns built on the sides of buildings near the ground, while the rich and religious classes are concentrated near the top.

Ganesha City, along with the rest of System 3, runs on its own schedule even when you're not there, making it a dynamic place filled with opportunities for an enterprising pirate. Zooming upward, the developers pointed out some potential opportunities for mayhem; a police department could be raided to free captive pirates and add to your crew, for example, or a bank could be robbed for cash to spend on Augments or cosmetic items at a nearby store. As you're driving, you can also listen to Radio Cheetah, a pirate radio station DJ'd by Knox, the chimp hybrid from the trailers.

Switching over to a starfighter (and in the process showing off some of the diverse ways you can customize it, swapping out different wing configurations and cosmetic patterns), the human pirate reunited with her partner, who was engaged in a dogfight with some cops above a massive statue of Ganesha. Blowing them out of the sky with Augmented missiles and machineguns, the two flew away from Ganesha City, breached the atmosphere, hit hyperspeed, and left the metropolis a distant speck on the planet far below. And all of this – all the fighting, exploration, and shift from terrestrial to orbital scale – happened without a single loading screen or other transition.

Reuniting with the pirates' mothership, which hovered high above the planet in low orbit, the human pirate parked her ship in space and climbed out, with a force-field space suit and jetpack protecting her from danger. Turning her spyglass on the distant city, she zoomed in, revealing its sprawling skyscrapers and floating information about the city. She then turned her attention to a massive, Nazca Lines-like formation of a monkey on the planet's surface, the significance of which the developers are keeping secret for now.

The view then switched to the Galaxy Viewer, a map screen that will let players examine the surface of Soma, zoom in close to find points of interest, do the same for other nearby planets, or zoom all the way out for a full view of System 3, with the star Surya at its center. It'll all be explorable when Beyond Good and Evil 2 launches; for more in the meantime, check out our previous coverage, and our coverage of E3 2018.