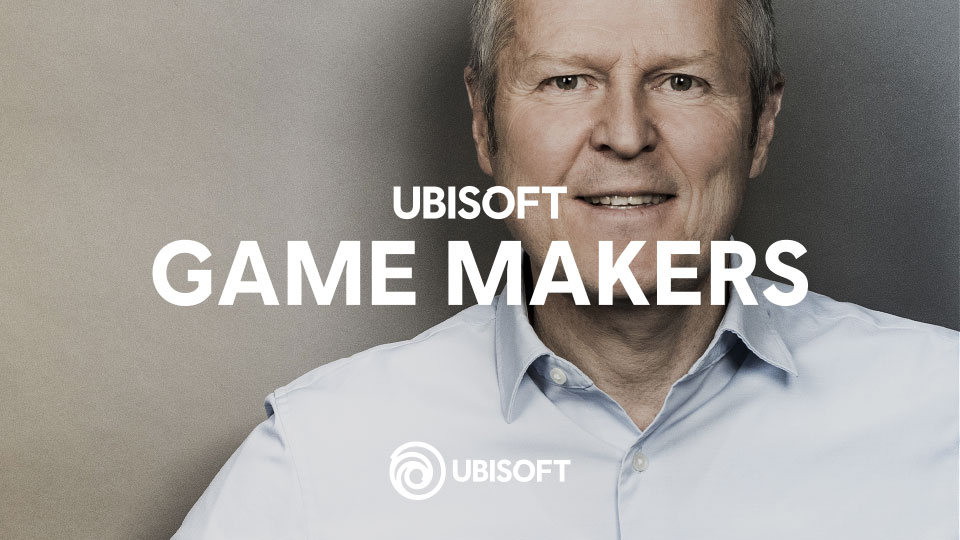 In 1986, the five Guillemot brothers founded a mail-order videogame publisher
called Ubi Soft in Brittany, France. Today, Ubisoft has more than 45 studios and
offices around the world, more than 20,000 team members, and is the creative
powerhouse behind beloved franchises including Assassin’s Creed, the Tom Clancy
brands, Far Cry, Just Dance, Watch Dogs, and Rabbids.

To celebrate the company’s 35th anniversary, CEO and co-founder Yves Guillemot
joins the Ubisoft Game Makers podcast for an in-depth conversation about the
past, present, and future of Ubisoft. He retraces the history of the company and
outlines his vision for the future of gaming in our quickly changing industry.

You can listen to Ubisoft Game Makers on the podcast app of your
choice. Remember to subscribe to get the
latest episodes as they release!

The Publisher With a Creator’s Heart

Ubisoft started mainly as a publisher, distributing UK games in France and
working with local third-party developers – often young, talented people
creating small games from their homes. Even in these early days, the Guillemot
brothers had their eyes on creation, and were using publishing and distribution
to finance the development of original titles.

“That’s what we wanted to do,” Guillemot says. “But even at that time, it was
costly to create games.”

A small in-house development team in Brittany developed Zombi, the company’s
first game, released in 1986 for the Amstrad CPC.As the focus on development
increased over the next few years, the Guillemot brothers founded Ubisoft’s
first big studio in Paris, which was soon followed by new studios in Romania,
Montreal, Shanghai, and beyond in the 1990s. Ubisoft’s international outlook was
already part of its DNA.

Guillemot says he’s been passionate about the videogame industry since those
early days because it’s a fast-changing environment. “The things are not set for
the long-term,” he explains. “You have changes in technologies that are
redistributing the cards to different players.” For Guillemot, this is what
allowed Ubisoft to come in as a challenger, leveraging new technologies to
create brands and enter new markets.

As for the technologies that Guillemot has his eyes fixed on for the future, he
mentions cloud gaming and VR. With the former, he says that increased machine
power will enable Ubisoft to create fantastic universes in which the world will
react to the player more than today, and where players can use these spaces to
build and share with others. With regards to VR, Guillemot reminds us that it is
still an emerging technology. “I feel that it’s going to come back big-time,” he
says. “What will be the exact form of the glasses and so on, to make you feel
that reality, we don’t know exactly yet. But I see that being immersed in a
world in 360, it’s something that is going to change the universe.”

When asked if there was a lesson he learned from his 35 years at the helm of
Ubisoft, Guillemot turns to the topic of collaboration. “It’s a group
achievement,” Guillemot says. “We worked hand-in-hand in creating those games,
those great experiences. The main lesson is really: work together, have fun
together, so you can create a lot more together.”

During the conversation, Guillemot mentioned how Ubisoft draws a lot of
learnings from the past and uses them as the foundation for the future. He
returns to Ubisoft’s teams: how they built the company and created its games,
and how their potential is the key to the future. And, also, how proud Ubisoft’s
team members should be about what the company has achieved.

Guillemot emphasizes that his goal is for Ubisoft team members to be empowered
to “be themselves […] not play a role” at work, so that they can “create great
things together.” Guillemot hopes teams at Ubisoft feel great pride in their
work, recognizing the part that each person brings to a bigger project. “It’s a
collective creation for the benefit of the world we live in. That’s what I love
about Ubisoft, being humble but creating experiences that will please people for
ages.”

Guillemot recently sent an email to all Ubisoft team members in which he
emphasizes the importance of freedom and responsibility in their work. Guillemot
says, “The responsibility is to make sure that when you do things, you really
respect others […] and you make sure that it is a collective achievement. So
it’s not yourself, it’s not you alone. It’s really a group creating things,
achieving results.”

“What sets us apart is the ability and the willingness of all Ubisoft team
members to try new things, this goal to change the world,” Guillemot adds. “If
we really can make this world a better place by bringing a lot of fun and the
possibility for people to actually hang out together and have fun, we will have
achieved something fantastic.”

Stay tuned for more content about Ubisoft’s history on Ubisoft News in the
coming weeks, and visit the Ubisoft 35
homepage
to discover current offers and giveaways until December 19.

For more about Ubisoft, be sure to check out the Inside
Ubisoft page.