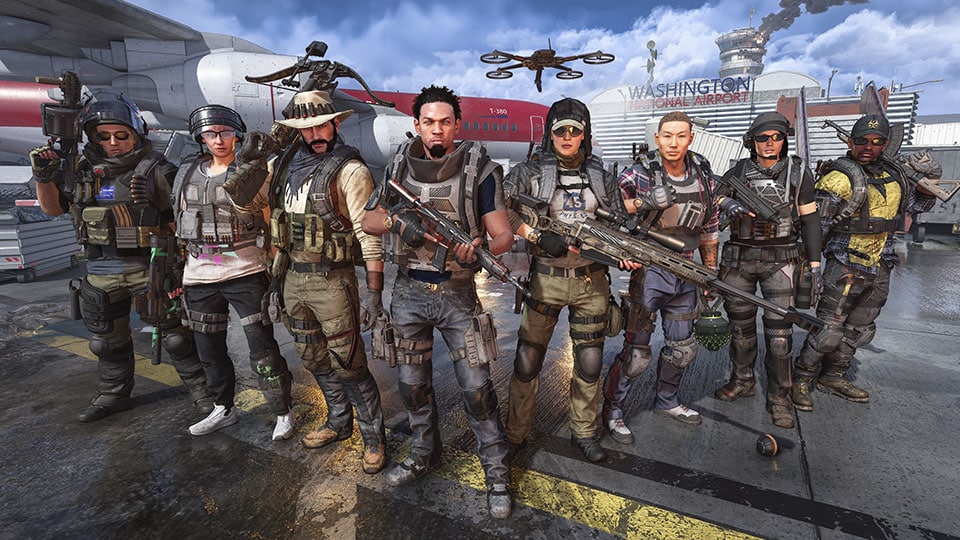 The Division 2 – Getting Raid Ready

The Division 2's Operation Dark Hours update launches on May 16, and with it comes The Division's first ever eight-player raid. Operation Dark Hours is free for all players, but you won't be able to participate if you're still a rookie Agent. Fortunately, we've got you covered with a handy guide that covers what you'll need to do to qualify for the raid, how to best prepare for it, what you can expect once you're in, and what kind of sweet rewards are waiting for you at the end.

What is the Raid?

Once players complete the Tidal Basin Stronghold, Operation Dark Hours will become available at the Base of Operations via the newly unlocked helicopter pilot or under the "raid" tab on their social page. Players can begin downloading Title Update 3 (which includes Operation Dark Hours) on May 14, however the raid will not open until May 16 at 9am PDT.

The raid itself takes place at Washington National Airport, an entirely new location in The Division 2 and will release with a "Normal" difficulty setting. Operation Dark Hours is designed for eight players, but can be played with fewer, just be warned that it was balanced for eight players and is The Division 2's toughest challenge yet. While you'll be able to invite new players into your party mid-raid, they will skip all previously beaten content and join the rest of the team.

Beating Operation Dark Hours is not simply about eliminating enemies; players will need to understand the mechanics of a fight, find a strategy to counter those mechanics, and then execute that strategy. Players will have different roles during the four major boss battles – whether that involves fighting enemies or interacting with the environment – and coordinating as a team is essential to victory.

Communication and healing will be more important than ever as armor kits will be restricted to a maximum of two per player. Your standard skills – like your healing drone and booster hive – will be effective on your entire team, but gear and Specialization Talents will only apply to your sub-group of four Agents. The entire raid is considered a "no respawn" zone, meaning you can't respawn during combat; your only hope will be to be revived by teammates. Reviving works on a token system. At the start of each fight, each player receives a Revive Token that allows them to revive an unconscious teammate during the battle. Each player can revive one teammate per battle, and only one. This does not apply to fallen players who are still able to crawl around, they can be revived normally.

Tips to Prepare for the Raid

To begin Operation Dark Hours, you'll need to have defeated the Tidal Basin Stronghold, advanced to World Tier 5, and have a gear score of at least 490. While 490 is technically enough to get started, you're likely to have a pretty tough time with the bare minimum, so we recommend going in with a gear score of 500. Getting to this point is easier said than done, so here are nine tips to get your Agent in prime raid shape before Operation Dark Hours drops on May 16.

1. Reach Level 30 and Complete the Campaign

Your first step to getting raid ready is completing the main campaign in The Division 2. This comes down to reaching level 30 and taking down all three Strongholds. While you can tackle the District Union Arena and Roosevelt Island Strongholds at level 28, you'll need to be level 30 to complete the Capitol Building Stronghold. If you find yourself a little shy of the level requirement, try completing any remaining side missions you have for a decent hunk of XP.

2. Advance Your World Tier and Push That Gear Score

To increase your gear score, you're going to have earn more gear. Pretty much any activity you do in The Division 2's endgame will offer up loot that will make you more powerful. In addition to completing Invaded Missions, you'll eventually need to branch out from the required activities. Wrap up your remaining side missions, take on Bounties, complete daily and weekly Missions and Projects, venture into the Dark Zone, and recapture control points. Capturing a control point (even if you've already taken it before) will unlock a supply room full of juicy loot.

Once you hit level 30, you'll be able to unlock a Specialization (Sharpshooter, Demolitionist, Survivalist) and a powerful new signature weapon (Sniper Rifle, Grenade Launcher, Tactical Crossbow). What you may not realize is that you can unlock the other Specializations as well, and freely switch between them. While this will help you find the Specialization that best suits your playstyle, it also offers you the ability to fill roles on your team as needed. The Operation Dark Hours will present a wide range of challenges, so having all Specializations available will help make sure your eight-Agent squad is well-rounded and prepared for anything.

That said, it's important to spend enough time with a given Specialization to make some progress in the skill tree. The Signature Weapon Damage Passive Talent in particular is used to increase the power of your signature weapon to keep pace with your World Tier; it's easy to see how that will be valuable in a tough fight. Furthermore, there are Talents that will grant powerful bonuses to you and your sub-group of Agents; having at least one of each Specialization in your sub-group will enable you to have access to more of these bonuses.

Once you get to the endgame, the Vendor and Clan Vendor at your Base of Operations (BOO) regularly offer up weapons and gear worth purchasing. They're not cheap, however, so make sure you're not just deconstructing all of your unused gear out of habit; sell some of it back to vendors to pad your E-credit purse. Buying new gear, even if it's just a few points higher, is beneficial, because loot drops are determined by your current gear score. The higher your current score, the higher the score of the loot that drops. Once you reach World Tier 5, immediately visit your BOO vendors for a quick gear score boost to get you on your way to 500.

Throughout your journey to save Washington, DC, you'll collect blueprints to craft weapons, gear, and mods at your crafting bench in the Base of Operations. You only need to craft each weapon mod once; once you have, say, a particular red-dot sight in your inventory, you can add it to as many compatible weapons as you wish. When it comes to weapons, gear, and gear mods, you'll only be able to craft them to the level of your crafting bench. If you want to craft the highest gear score items possible, you'll need to upgrade your bench using resources like ceramics, titanium, and printer filament, not to mention a decent sum of E-credits. Between crafting and vendors, you'll have to carefully decide which loot to sell, and which loot to deconstruct. It's important to recognize the type of crafting materials you get from deconstructing gear. If you're not getting the resources you need, consider selling the items instead. When it comes to upgrading your crafting bench, you'll want to deconstruct mods as they're the best way to get printer filaments that you can use to further upgrade your bench.

7. Take on Missions Beyond Tidal Basin

If you're unsure which weapon loadout will serve you best in the raid, it's a good idea to visit the shooting range at your BOO. Here, you can test out your weapons' range and see live feedback on the damage per second (DPS), accuracy, and time to kill (TTK) of your weapon. This will help give you an idea of exactly how effective your weapon loadout and mods are. It's also a great way to test out new weapons before heading out into the field.

Diversity is crucial when playing co-op in The Division 2; doubly so when you jump into Operation Dark Hours with an eight-Agent squad. It's a good idea to have a wide range of weapon classes, talents, and Specializations, so you can tackle anything the raid throws at you. With a limit of only two armor packs per player, healing skills will be more important than ever. Furthermore, if all eight players try sniping, you're likely to get outflanked quickly; teammates covering your flank with shotguns and SMGs can make a few snipers much more effective. Similarly, you're likely to encounter tons of elite enemies in Operation Dark Hours, so equipping talents that inflict bonus damage against elites could prove essential.

What Rewards Can You Get?

So, what happens when you and your seven new best friends finally complete Operation Dark Hours? That's when you'll get to reap the rewards of your skill and teamwork. Operation Dark Hours will give you the chance to earn three exclusive gear sets that will only be accessible from the raid bosses, as well as an exclusive exotic weapon. In the raid, only bosses will drop loot; all other enemies will only drop supply items. The exclusive rewards will only drop from bosses the first time they are killed before the weekly reset, meaning players who want to complete their gear sets will have to replay the raid multiple times over the course of several weeks. All loot that drops in the raid will be 500 gear score.

The first squad to complete the Operation Dark Hours raid will be immortalized inside all players' Base of Operations with a team photo and list of players' names. While only one team can be the first to complete the raid, all players will have a chance to earn the following rewards:

There are also 11 different commendations you can earn throughout the raid. Players will be rewarded for taking down each of the four unique raid bosses: Max "Boomer" Bailey, Oliver "Weasel" Gordon, Lucy and Buddy, and DDP-52 Razorback. While taking down the bosses will be a monumental challenge in itself, it's important to understand that you also get points for style. Players can earn additional Commendations by taking down each boss while meeting a particular condition:

Outside of boss fights, players can earn the Blueberry the Bear Merit for finding and destroying all 40 blue bears in the raid, as well as additional Commendations for completing the raid without a single squad member being knocked unconscious, and for beating the raid five times.

Now that you know how to be raid-ready, it's time to get your preparations started, because the race to complete Operation Dark Hours begins on May 16 on Xbox One, PS4, and PC. For more on The Division 2, check out our previous coverage.