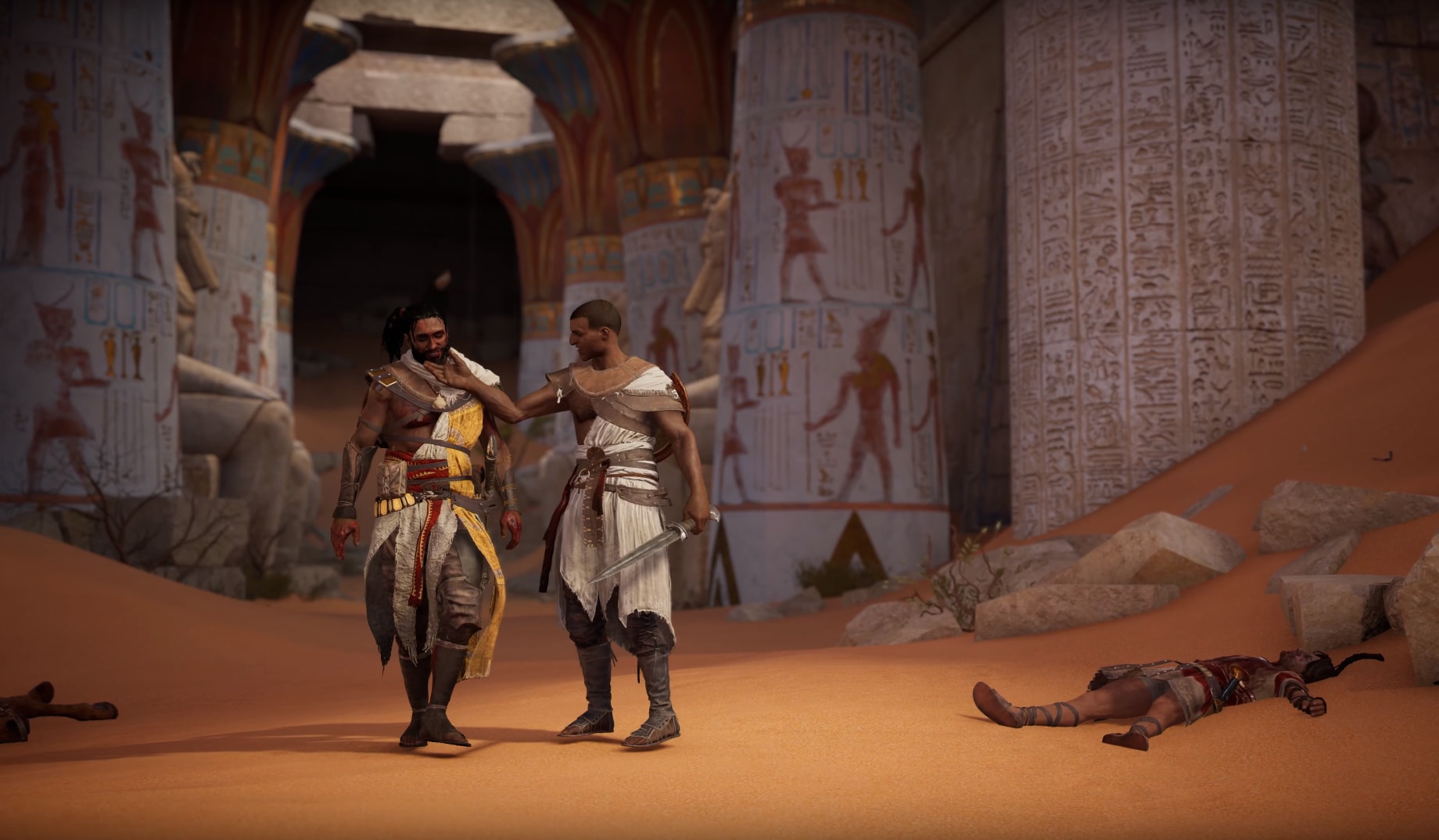 Assassin’s Creed Origins Made Me Feel Accepted As An Egyptian

There is a moment early on in Assassin's Creed Origins when Bayek comes to the aid of his friend and fellow protector of Siwa, Hepzefa, as he's ambushed by a group of soldiers. After dispatching their enemies, Bayek and Hepzefa embrace, celebrate their victory, mount their camels, and ride off to Siwa. It's a relatively brief moment in Bayek's epic journey, but nonetheless it is one that left me in tears.

As an Egyptian born and raised in the United States, I'm used to being an outsider, to being the only one in the room. At times, my identity can feel like a novelty; I become the Egyptian that everyone knows. Growing up, Egyptian representation in western media always felt tokenized to me. "Egypt" is often reduced to pyramids, mummies, and camels. Egyptians are rarely the protagonists and are often relegated to the role of side characters or villains, even in stories that take place in our own country. This is why I cried when I first saw Bayek and Hepzefa on screen together. For the first time, I was witnessing, not one, but two Egyptians on screen at the same time. They weren't whitewashed; they weren't men visiting Egypt; they weren't villains; they were two Egyptian heroes defending their home. What meant the most to me was how the game handled the scene. It wasn't making a big deal about it. By presenting Bayek and Hepzefa's victory, and even their very existence, as normal, it set the stage for a game that treats Egyptians with respect and nuance.

It was a cathartic moment, as if suddenly my identity was being embraced and celebrated. Throughout my next 100-plus hours with Assassin's Creed Origins and its three expansions, I was delighted to find a game that not only took place in Egypt, but one that dove head first into the culture, religion, and way of life of the people of Egypt in a way that made the world feel authentic. Cultural representation on this level is difficult to achieve. To find out how Origins came to present such a realistic depiction, I spoke directly to the development team to find out how they were able to bring the world to life.

Creating an authentic version of ancient Egypt required a holistic approach. "The world and the time period impact everything else," says Creative Director Jean Guesdon. "All of our teams learned a lot about the historical period. Audio, animation, narrative, level design teams – everyone needs to understand what the period was like as much as possible, so that everyone could bring something to the table. The small details help make it feel real."

By making sure all development teams were familiar with Egyptian history, the developers could integrate the culture into more than just the environment. "A big thing for us was the new quest system," says Guesdon. "We had the writers really work with the region teams, actually. The region teams owned both the world, and the quests set in that world. The writers and the narrative team were embedded into those regions. We wanted to move away from random missions of previous games, towards more meaningful stories. We wanted players to have the opportunity to meet people, so they could have a better understanding of the setting."

This new emphasis on more personal storytelling enabled the writing team to build Egyptian culture into the foundation of nearly every quest. "The purpose of the quests and the NPCs [non-player characters] having their own personal stories is about the connection between the players and ancient Egypt. It's not only a sandbox that you travel in; a lot of what you get from that time period comes from the people you meet. Which is the case in real life," says Guedson. "When I travel, my memories from a certain place will be heavily oriented by the people I met."

Players experience the world primarily through Bayek himself. For a majority of the game, Bayek is not an Assassin; he doesn't need to lurk in the shadows or blend in with the crowds. Bayek is a Medjay, a protector of Egypt and its people. That's why I never put Bayek's hood up; he's a personable, caring man, who embraces his duty to visibly help the people of Egypt. Plus, I wasn't about to cover up the one video game hero who looks like me. While Bayek's journey is filled with revenge, political turmoil, and a civil war, his personality and loving nature means it never feels out of place for him to take some time to play with the local children.

Bayek alone cannot embody the culture of an entire civilization, but that's where Assassin's Creed Origins' thoughtful side quests come into play. They offer opportunities for the player to learn more about ancient Egyptian civilization through intimate moments with other characters. Bayek's own son, Khemu, is a perfect example. The "Bayek's Promise" quest tasks players with finding 12 different stone circles throughout the world. Finding one of these circles triggers a flashback conversation between Bayek and Khemu while the two stargaze. These conversations touch on topics like love, family, and loss, and each ties to a specific Egyptian deity represented in a constellation above. Bayek's fatherly advice feels relevant to any time period, but contextualizing it around the Egyptian pantheon provides added insight into the family's culture and religious beliefs.

Another example of a personal moment used to connect the player to Egyptian culture comes from a ritual we see Bayek perform numerous times. As Bayek methodically takes down each of his targets, he wipes their blood with a feather. The ritual take place after nearly every assassination, but it is really only given context in Egyptian society through an optional side mission. In "The Bride," Bayek happens across a woman standing on a cliffside mourning her deceased husband. Contemplating suicide, she mentions to Bayek that she and her husband used to sit up on the cliff and watch herons. In an effort to console the widow, Bayek brings her a heron feather. When asked why he brought her the feather, he replies, "It is a Siwan ritual. Feathers mean a lot to us. Anubis will weigh our hearts when we die against Ma'at's white feather. Yours. Mine. Our loved ones." Successfully walking the woman down from the cliff reveals the true meaning behind the ritual Bayek (and, much later, Altair) conducts after every assassination. The weighing of hearts is an important concept of ancient Egyptian afterlife and it has been woven deeply into the story of Assassin's Creed Origins thanks to a brief yet powerful character moment.

The importance of religion and ritual daily life is continuously reinforced. In one of the more heart-wrenching main quests, a young girl named Shadya is murdered by one of Bayek's targets known as The Crocodile. Following this point in the story, an optional side quest called "Shadya's Rest" becomes available, and deals with the repercussions the death of Shadya has on her parents, Hotephres and Khenut. It's a situation that mirrors Bayek and Aya's: two parents who have had to endure the death of their young child. However, instead of turning down a murderous path of revenge, Hotephres and Khenut deal with their anguish in a more dejected manner. Thrust apart by their mourning, Hotephres looks for solace at the bottom of a bottle and in the embrace of a woman that is not his wife. Khenut's grief, on the other hand, has driven her into a near catatonic state. It is only when Bayek helps them conduct a Siwan funerary ritual that the two are truly able to begin their healing process. The somber quest chooses to embrace pain and hardship in a manner that is believable across time and culture. Yet, through the lens of Bayek, we come to understand the importance of proper funerary rites in ancient Egypt.

While many quests inform Egyptian culture through intimate relationships, certain quests help to illustrate the larger societal issues at play in Ptolemaic Egypt. When Bayek comes across a group of farmers burning bodies in "The Sickness", he is appalled at their blasphemous method of disposing of the dead. As we learn that cremation is an unsuitable method of dealing with the dead in Egypt, Bayek learns that the corpses are diseased, and must be burned to protect the surviving farmers. Upon further investigation, he discovers that the dead farmers were poisoned by a rotting food source. As he tracks down the perpetrator, Bayek discovers that a merchant has been poisoning the poor, overtaxed Egyptian farmers so that, upon their death, he can claim their land for the wealthier Greeks in the region. It is a relatively short quest, but it helps inform the dynamic between Greeks and Egyptian and highlight how Egyptians in Ptolemaic Egypt were often second-class citizens in their own land.

These are only small samples of how Assassin's Creed Origins weaves the culture of ancient Egypt into nearly every quest to present complex characters with memorable and personal stories. Elsewhere, a farmer needs help fertilizing his field before he can lend a hand, a man requests your aid in gathering bodies after a hippo attack, and an old gladiator needs to come to terms with his retirement. At its core, Assassin's Creed Origins feels authentic because its people are believable; they have realistic emotions, motivations, reactions. They have crops to harvest, loved ones to mourn, and natron to collect. They don't need Bayek in their lives to function, and the world is that much richer because it doesn't depend on you to justify its existence.

When I think about my time in Egypt, I don't think about the pyramids and camel rides. I remember seeing the jewelers selling silver bracelets, smelling the cart serving ful medamas, and hearing the sound of children playing soccer. Egypt isn't defined by its monument, it's defined by its people and their culture. The result of a holistic approach to understanding and implementing Egyptian culture is that Assassin's Creed Origins' world not only looks real, but feels real as well.

For me, Assassin's Creed Origins is more than just a game. It is representation. It is fulfillment. It is validation that my identity has a place in a medium I adore.