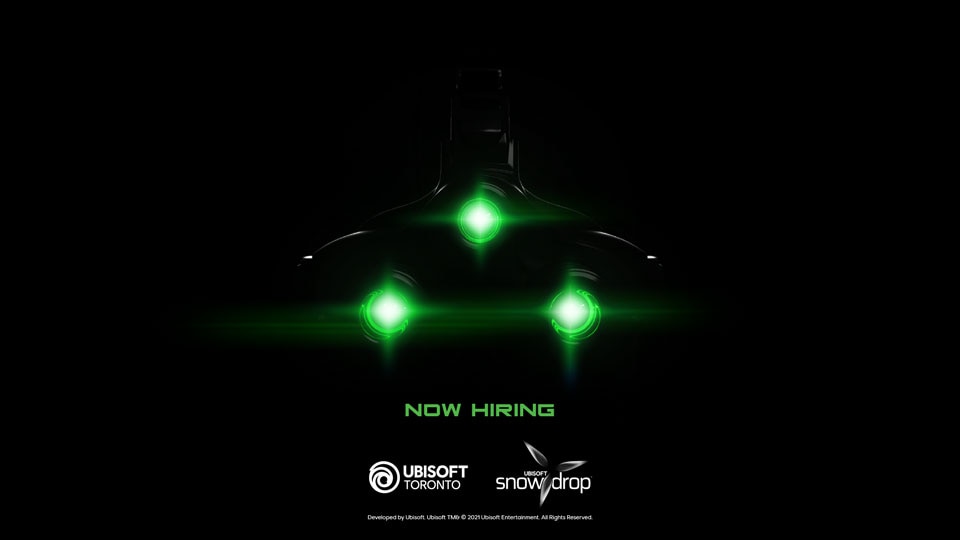 Ubisoft has greenlit the development of a Splinter Cell remake that will draw from the rich canvas of the brand. Led by Ubisoft Toronto, the game will be rebuilt from the ground up using Ubisoft's own Snowdrop engine - the same engine being used to develop Avatar: Frontiers of Pandora, as well as Ubisoft's upcoming Star Wars game - to deliver new-generation visuals and gameplay, and the dynamic lighting and shadows the series is known for.

To find out more, we spoke with three developers on the project - Creative Director Chris Auty, Producer Matt West, and Technical Producer Peter Handrinos - about their connection to the series, what's being preserved, and what made Splinter Cell such a revelation.

How are you approaching Splinter Cell as a remake? What makes it a remake and not a remaster?

Matt West: To me, a remake takes what you'd do in a remaster and goes a little bit further with it. The original Splinter Cell has a lot that was amazing and revolutionary at the time it came out, 19 years ago. The gaming public now has an even more refined palate. So, I think it kind of has to be a remake as opposed to a remaster. Although we're still in the very earliest stages of development, what we're trying to do is make sure the spirit of the early games remains intact, in all of the ways that gave early Splinter Cell its identity. So, as we're building it from the ground up, we're going to update it visually, as well as some of the design elements to match player comfort and expectations, and we are going to keep it linear like the original games, not make it open world. How do we make sure that new fans are able to pick up the controller and dive right in, and fall in love with the game and the world right from the get-go?

Peter Handrinos: From a tech perspective, if I had to boil it down to a couple of words in terms of the difference, what we're doing is exploration and innovation here. We've got a new engine and a new console lifecycle to take advantage of, so the tech is one area that we don't want stuck in the past.

MW: The phrase "Stealth Action Redefined" from the original game has actually proven to be a really valuable North Star for us. We're able to, for example, apply that to what Peter was just saying, as far as being able to prototype and innovate and test some stuff out. That is very much in keeping with us redefining what stealth action is going to feel like for a modern audience.

What aspects do you think are most important to update? What is the core of this experience that needs to be preserved?

Chris Auty: Splinter Cell was a breakthrough in stealth - as Matt mentioned, it was "stealth redefined" with a huge focus on getting that core gameplay right above all, and delivering on an ideal: be a ghost. It's important for us to preserve the sense of mastery by supporting players who observe the situations, make their plan, use their gadgets, and outsmart the enemy creatively to deal with the challenges they are presented with. Ideally, they end up coming out on the other side with no one having realized you were even there. That's the essence of Splinter Cell.

MW: One of the things that, from my point of view is really exciting about this project, is that the last couple of games all of us have worked on have been really big worlds. What that means is that the economy of decisions is very spread out, whereas what I love about a Splinter Cell map is every square inch represents intentionality. Every square inch is part of a choice, or directly offers a choice, or has a direct ramification. That density of gameplay is at the forefront in Splinter Cell, and that's going to be really, really important for us. The gameplay experience we are targeting is directly tied to what we want players to feel, to capture the essence back when we were all playing the original games.

CA: Yeah, and preserving what made those early games so compelling. We recognize a huge part of the appeal of Splinter Cell is the flawless planning, execution and satisfaction you feel when you go in and absolutely ace every encounter. Seeing your mastery put on display at the end of things, especially when you go through with no alarms triggered - that's a big part of the Splinter Cell experience, and we want to be sure we're honouring that.

Splinter Cell is being remade in the Snowdrop engine; what does it enable you to do that wouldn't have been possible 19 years ago, or that wouldn't be possible with other engines even now?

PH: Snowdrop is a proven modern AAA engine. It empowers content creators and programmers alike to try things quickly, see what works, and ultimately find success. I think that's one of its major advantages, allowing us to quickly find the modern equivalent of that core Splinter gameplay. Some other AAA engines out there do not afford this type of iteration speed, necessarily, and so this is really what gives Snowdrop an edge when bringing Splinter Cell up to speed on a modern engine.

Taking a step back, what was your first experience with the first Splinter Cell? What made it special to you in 2002?

CA: My background has been in level design and level creation for the past 20-odd years, and seeing that back then - that there could be cloths that flap as I move through them, and that there's some sort of actual, genuine interaction between me as a player and the world I'm in; seeing the enemies moving around, allowing me to plan and make different judgment calls based on where they are and what's happening - that had a huge impact on me early on. Things like the thermal vision and using that as a gameplay element - these things were not just graphical bells and whistles. They were actually relevant to the experience.

From a team perspective, we're all behind that philosophy, that the stuff that gets added is not just eye candy. It has a relevance and a bearing on the on the game itself. So that was a huge, defining moment for me playing Splinter Cell for the first time, seeing that tech and being blown away by it, and then seeing it integrated into gameplay. That was a big moment, and a good memory.

Back to the present: What is your team makeup like at this point - are there any veterans from past Splinter Cell games? What opportunities are there for people who want to join the project?

PH: We want to invite anyone who's intrigued by what we've said to apply to join Ubisoft Toronto. We're building a new team, the same way we did when we started the studio. There are technical leadership openings and roles across all different job families available. But there are a lot of vets here, so we're going to have a really good mix of people who have worked on previous Splinter Cell games, and new team members who are joining and bringing fresh energy and fresh ideas.

MW: It's a big deal that Blacklist was the first game that ever came out the door at Ubisoft Toronto. It's in our DNA.

CA: It's a universal quality of everyone who's joined so far, and everyone that we're looking to bring on as well, that there's a respect for the brand, and for the game and its history. I know everyone who's currently working on the project has spent an enormous amount of time researching, playing, reading, and getting to know the games, the characters, the stories, and what makes Splinter Cell awesome at its core.

Beyond what we've discussed, what is most important for readers to take away from this announcement?

PH: A lot of time has passed since the original Splinter Cell, and even since the last sequel - enough time to miss an entire console generation. So now we're going to take the time to explore what this means for us, for light and shadow, for animation tech, for gameplay, AI, even audio. We're going to ask ourselves, "where does it make sense for us to innovate? What not only fits with the legacy, but brings the game up to a level that will be expected of us, and where can we surprise our players?" We want to bring them something new, yet still connect them to that feeling that they had two decades ago, playing that masterpiece for the first time.

MW: I'll throw this out there: You've got to have a tagline, and one of the things that we're using currently as the tagline, from the very beginning, is the phrase "respect the goggles." I love the goggles as a symbol for Sam. We are making a game that is going to be modern, but built on the foundation of the brand's rich history. The game earned its stripes the right way, by being innovative and challenging, and a really different experience than what was in the marketplace at the time. "Respect the goggles" helps to remind us of the fact that we have to do it justice.

There's stuff that simply needs to be redone from scratch to be up to snuff for a modern gameplay experience. With that, though, what do we need to do to absolutely preserve the feeling of early Splinter Cell? We're going to be straddling the line between the spirit of the old, and the comfort of the new, so that we can excite and surprise new players, but also make sure that when our returning players pick up the controller, they have that sigh of relief, saying "Ahhh, they got it."

CA: It's safe to say a lot of us on the team are stealth purists, and we're behind that level of seriousness when it comes to those kinds of mechanics, and those sorts of things that we want to see in this game. And we're very, very aware of what makes classic Splinter Cell what it is.

MW: We talked earlier about that dense world, where every square inch is important because they're all a consequence of a choice or setting the table for the next choice from the player's point of view. So that kind of density, that packed nature that I think was so palpable in the first trilogy - it's going to be one of our guiding lights as we go forward.

CA: With this remake, we are building a solid base for the future of Splinter Cell.

To learn more about career opportunities and life at Ubisoft Toronto, visit the studio's job website and blog. For more on the Splinter Cell remake, stay tuned to our dedicated news hub.