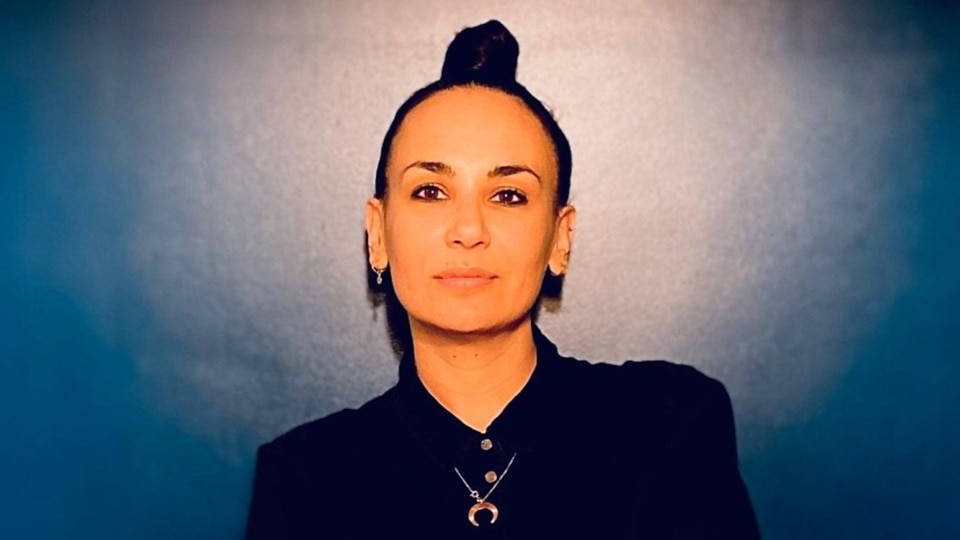 On the big list of cool, creative jobs, fashion designer is right up there with game developer. Sarrah El-Meddeb is both. She’s the costume manager on Just Dance working out of Ubisoft Paris, and it’s up to her and her team to design, style, and fit each of the coaches, the dancers that guide players through each song. It’s a job unlike those of the vast majority of her peers in the gaming industry, but one that El-Meddeb is acutely suited for. We recently sat down with her to learn how she got into the videogame industry, how it differs from the fashion world, and how her team goes about creating an outfit for Just Dance.

Tell us a bit about your background. How does a fashion designer get into videogames?

Sarrah El-Meddeb: I come from the fashion world. I used to work at trendy offices. After that, I worked as a fashion designer for women’s and men’s underwear. It’s an interesting field, but challenging to be creative in.

After a few years, I decided to move to Shanghai for a year to teach Parisian fashion at a high school. When I eventually returned to Paris seven years ago, I was searching for a job, and I heard that they were looking for a fashion designer to work on Just Dance. So I applied, and got the job. The game universe was really mysterious and strange to me at the time, because I didn’t play games. So joining Ubisoft was a new kind of challenge for me.

What originally drew you to fashion?

SE: It’s going to sound cliché, but I was attracted to it when I was a little girl. I used to draw a lot of feminine female silhouettes. Eventually, I discovered that there were fashion schools. It was a bit challenging though, because I was born in Tunisia.

My dad is Tunisian and my mother is Spanish, but they used to live in Tunisia. I grew up there, but was still fascinated and immersed in European culture. I went to a European school. Early on, I knew that I wasn’t going to build my professional life in Tunisia. I knew that if I wanted to be a fashion designer, I had to go to another country to do it.

So I went to a public fashion school in the south of France. It was a really formative time in my life. I questioned what I wanted to do, and experimented a lot. I went to an art school in the north of France to become a textile artist. I spent three years there. I even went to Bamako, Mali, to learn traditional dyeing techniques and work with sculptural fabrics. But eventually I decided I wanted to get back to traditional fashion. 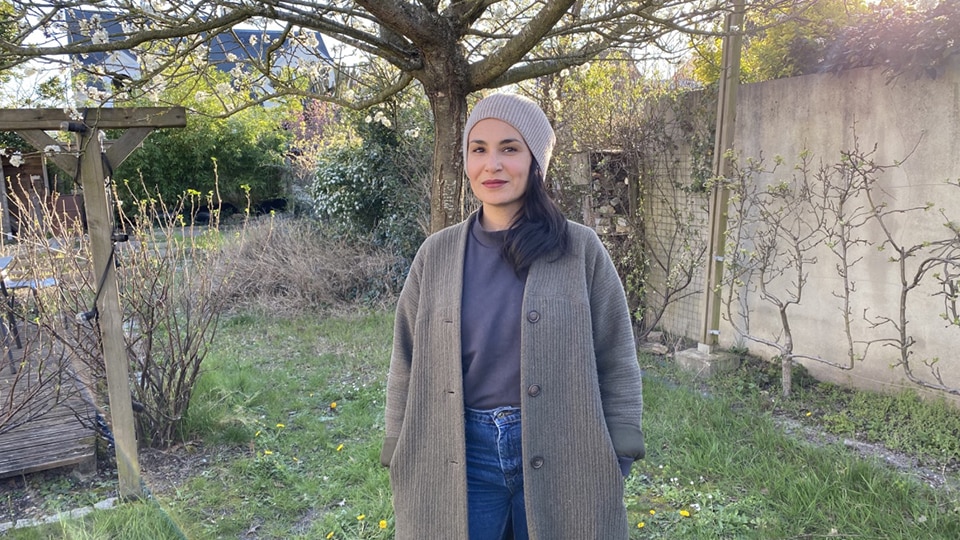 You have so much experience in more traditional fashion. What made you want to apply to a video game company?

SE: Because it was really strange. I always used to wonder who was responsible for videogame character designs. I wanted to know if there were people designing the costumes. And when I heard that at Ubisoft, they were looking for a fashion designer, I thought, “OK. Let's try it.” Honestly, I hadn’t even heard of Just Dance. I never played it before joining Ubisoft.

You don’t often meet fashion designers working in games. Are you and your team the only ones?

SE: It's unique, and I say that because I couldn’t find another position like this in other videogames. I can't find something close to what I'm doing here. The closest thing would be character design. Here, it's just really specific because we’re working on the fashion of the character. We are creating characters, it’s more similar to cinema than typical games.

It’s really rare to be in this position, to do what we do. I think I can say that it's the only game where you have to create the costume directly on the dancer in real life. We’re not just designing virtually; we have to design practically, too.

So what exactly does a costume manager on Just Dance do?

SE: I’m a part of the creative team on Just Dance. So, when we get the song lists, we have a brainstorming meeting and we gather our feelings and what we imagine for each song.

So for example, when I hear a song, I'm like, “OK. I imagine the coach is a single man and he's, like, mysterious.” Then we bounce ideas off each other until we have a sense of what we want the song to be. Then, I brief my team on what we envision and we start styling. We start by looking for inspiration and references. We take the inspiration from many different universes; fashion, film, entertainment. Once we agree on our direction, we begin the design part and start sketching.

Once we have a design, we go back to the creative team. And when everyone is OK with it, we start the costume brief, which is a document for our costume-maker team, to give them an idea of our intention, the shapes, the texture of the fabric, the color.

We spend about 10 to 13 days for a costume creation. We see the dancer three times on those 10 days. We have the first fitting, which is mostly for their shapes. The second one is much more precise, and the third one is the final one. And after, they’re ready for the shoot. 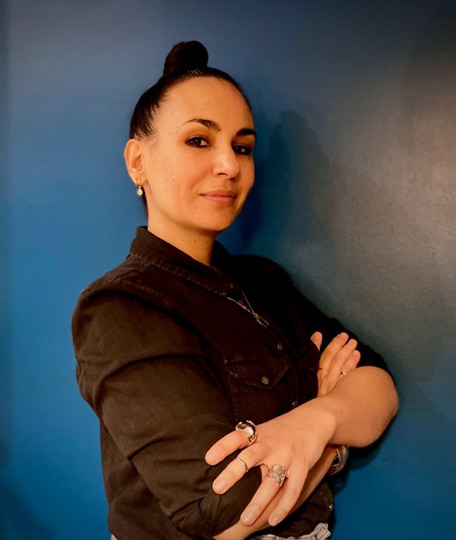 Certain songs have themes attached to them, like Beyoncé’s “Naughty Girl,” which had an Arabian Nights theme. Do you help decide that theme, or are you given the theme and then have to make a costume to fit it?

SE: We usually come up with this ideas together with the creative team. Sometimes, maybe our creative director tells us, “I want a song that’s bit goofy or something,” and in those cases we might then make, like, mascots or something like that.

Can you give us an example of listening to a song and conceiving the outfit?

SE: For "God is a Woman," when we heard the song, we were like, “OK, for sure it's solo and it's a woman. It's like a strong woman. She's traveling. She's traveling in space. I think it's going to be something maybe abstract. Why not try to make something, like, close to space and the stars?”

Once we had that, we moved onto production. We had a very amazing costume made with a 3D printer and then with a lot of shiny reflective material and floating inks for the backgrounds. It was a very huge concept, and it was super-interesting to go with that design.

And then for “Ma Itu,” which was a song written for Just Dance 2020, we worked with Stella Mwangi. It was this whole African and futuristic concept. I brought that idea to the table, a few years ago, and we really wanted to have a strong character. It was a unique design, but it was an original collaboration; there was no song when we were coming up with the concept.

We brought the concept, costume, and backgrounds to Stella Mwangi, and created the song. It was super interesting too, because it was actually the reverse of the normal process; we inspired the song this time. It was really interesting to work in that way.

Is there a specific part of the job that you like the best?

SE: When we start the designs, because we come up with hundreds of ideas. We want to do so many things, and we try a lot of them. We are always proposing new concepts, and it’s a really interesting phase at the beginning. The concept part is super-interesting.

What’s the biggest difference between working on Just Dance and working in more traditional fashion?

SE: Oh, it's really simple: it's being really original and unique every time. You know, when you're a fashion designer, a classical fashion designer, you have your specialization. You work on the specific universe, and you are sort of a master of that.

Sounds like you get to flex your creative muscles a bit more.

SE: Always, always, always. (laughs) Absolutely. I think that as technology evolves, we have more and more creative allowances. It's really interesting, because you have to question yourself every time to be able to be pertinent in your creations.

In fashion, you are working on the garments. Here, it's much more creating characters. It's mostly thinking about archetypes, and how you can make that archetype through the outfits.

I imagine the fashion industry isn’t as male-dominated, either?

SE: Yeah. It was sort of an interesting, seeing that (gender disparity) from the inside, the geek universe as a girl and as a fashion girl. You know what I mean?

What I love about working at Ubisoft and on Just Dance is that they wanted me to work because of my expertise in fashion. Because no here knew much about it. And you know, fashion was like, mysterious. It was so good to be in this kind of universe where you can express yourself and totally display your creativity in front of people who don’t know exactly what you are talking about, and they all just trust you.

I think when you look at the videogame industry, especially in the past, you see a lot of clichés on the treatment of the silhouette, you know, the big boobs and things like that. On Just Dance, we try to work with realistic proportions and people. And we try to be more and more inclusive in terms of silhouettes. 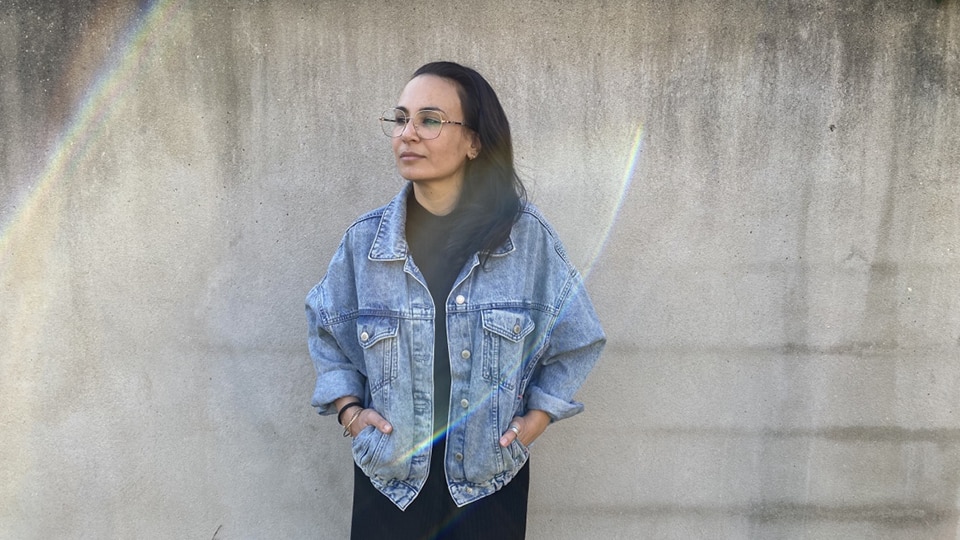 What advice would you give to someone who wants to do what you do?

SE: Be curious. Be curious and be willing to learn and adapt. I remember for a certain coach in Just Dance, I was really unhappy with the way it turned out, but then we saw the fan reaction and they loved it. So I realized that there was something I wasn’t getting.

We had some issues about some technical constraints, and we had to choose some fringe that was a bit too thick. And the pants were so-so. On the shooting days, we had some issues with the wig; it was too rigid. It wasn't exactly what we intended. But in the end, all the fans loved it.

At times, fashion feels like a form of art where people don't know what they like until you show them what to like. How do you balance giving people things they want with things that might not know about yet?

SE: It's a huge question, and I'm always between the two. For example, I was talking about "God is a Woman," and how we 3D-printed a costume. I was so proud of that costume. But the fans, when they saw the map, they were like, “OK, we don't understand why you decided to make a spoon costume.” And I was like, “What? You misinterpreted our meaning.”

Sometimes, the real challenge is trying to be more obvious. Because sometimes you can put a lot of effort into your creation. You can put a lot into the concept, but if it's not understandable at the first look, you lose. In the end, the design works for me when the fans understand what we have done.

Do you have any fashion advice for everyone?

SE: Honestly, it’s going to sound cliché, but just be yourself. Don’t try to follow anyone else. If you feel good on the inside, you’ll look amazing on the outside.