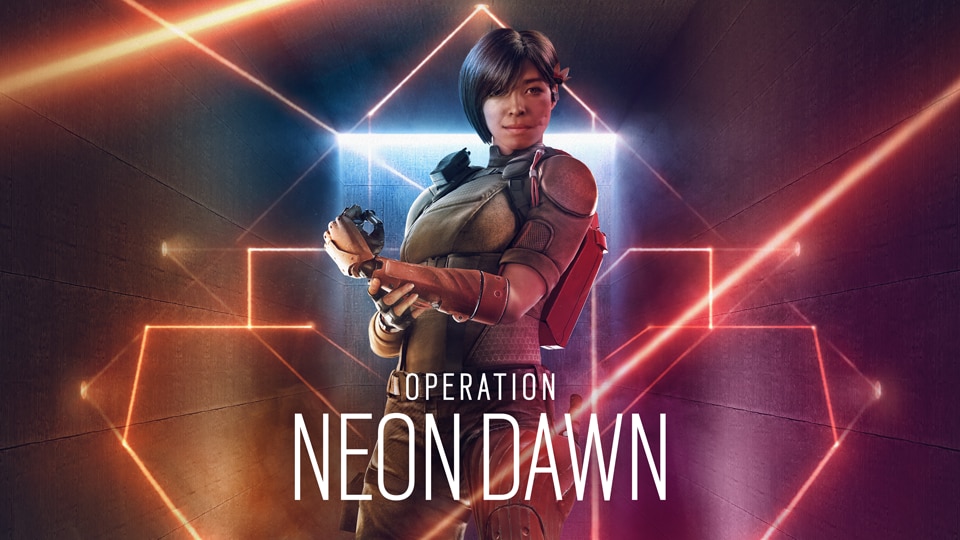 Operation Neon Dawn brings Rainbow Six Siege a new Defender named Aruni, who can deploy laser gates to deter Attackers and destroy their gadgets. The fourth season of Year 5, Neon Dawn will also bring a new rework for the Skyscraper map, as well as some key updates for Hibana, Echo, and Jäger’s gadgets. The Operator updates and map rework will be free for all players when Operation Neon Dawn launches, while Aruni will be available at launch for Year 5 Pass owners, and unlockable with Renown or R6 credits for all players one week later.

Aruni is a medium-speed, medium-armor Defender from Thailand who can place her Surya Gates over soft or reinforced walls, windows, hatches, or doors. The device projects a glowing laser grid over the entire opening, which will destroy any Attacker drone or utility projectile that hits it, and damage any Attacker that touches it. The only exception is that when placed over doors, the grid will stop short of the ground, leaving a gap at the bottom for drones or nicely aimed projectiles. Surya Gates force Attackers to rethink their approach, and spend time and utility to get past them.

When a Surya Gate destroys something or zaps someone, it deactivates temporarily to recharge. So once an Attacker uses some utility, like a grenade or a gadget, or burns some of their health to take down a Surya Gate, the obstructed doorway is just a doorway again. Note that there is a short delay between zapping something and deactivation, so if an Attacker wants to throw one stun grenade to shut down the gate and another to stun anyone inside the room, they’ll have to wait to throw the second one or risk getting it zapped as well. This short delay is all Aruni needs to get her speedy P10 Roni submachine gun or her big MK 14 EBR marksman rifle trained on the door in question. The first DMR to be wielded by a Defender is not to be taken lightly, and Aruni always has her PRB92 sidearm standing by for close encounters.

Influencing where encounters happen is one of Aruni’s biggest strengths, as her Surya Gates help the defending team reconfigure the map to their advantage. While Attackers get hung up dealing with laser problems, Defenders can waltz right through Surya Gates, because they turn off when a Defender is close. This makes them perfect for protecting your rotation holes and preventing Attackers from easily flanking you; just be careful not to set up an ambush too close to one while an Attacker is nearby, or you may give your position away by turning off the gate.

Even if the Attackers do shut down a gate, it’s only temporary. Surya Gate generators are indestructible, but while the gate will recharge, it won’t reactivate automatically. Defenders will have to wait until the sparking effect visible on the device stops and the generator flips open again, and then they’ll have to shoot the device to get the grid back online. And if Aruni ever decides to shift her defensive focus, the generators can be picked up and repositioned at will. The power of Surya Gates to disrupt the Attackers’ plans and movements, plus the added barbed wire or proximity alarms in her secondary gadget slot, make Aruni a formidable asset to any defending team.

Operation Neon Dawn is also bringing a new map rework for Skyscraper, which removes a number of exterior balconies in order to reduce the opportunities for Attackers to shoot Defenders without committing to entering the building. A new roof traversal and second-floor connector ensure there are still plenty of movement routes to take advantage of, and a number of tweaks have been made to the bomb sites to make them more competitive.

A few gameplay updates are inbound as well, including an update to Hibana’s X-Kairos launcher. She can now toggle her gadget to shoot two, four, or six explosive pellets, giving her more destructive flexibility. You’ll also notice that Echo’s Yokai drones are now always visible, so you’ll know where your splitting headaches are coming from; and Jager’s ADS gadget now operates a bit differently. The ADS will now take out one projectile, and then need to recharge before zapping another. Also, the runout timer for Defenders has been shortened, so players stepping outside to get an angle on the Attackers will be detected sooner.

Catch up on the previous season with our Operation Shadow Legacy Operator and Map Guide, and be sure to bookmark our Rainbow Six Siege news hub for future updates.