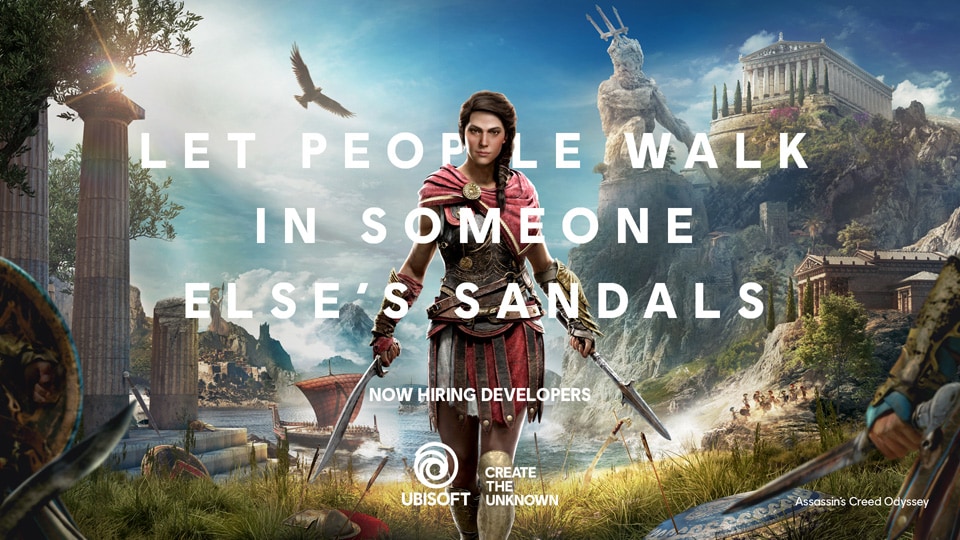 As world director and art director on Assassin's Creed Odyssey respectively, Ben Hall and Thierry Dansereau know a thing or two about crafting engrossing large-scale environments. Thanks to the work of their teams, Assassin's Creed Odyssey's recreation of Ancient Greece is one of Ubisoft's largest and most detailed worlds. As part of our Create The Unknown series – which looks at the future of the videogame industry – we spoke with Hall and Dansereau about the role of new technology in updating and improving games, how videogames are already helping the film industry, and why players themselves will help build bigger and better worlds.

How do you see the future of the gaming industry in 10 years?

Thierry Dansereau: With what we've just seen with Google [Stadia], I think the future is going to be that games will all be streamed. I see the end of the gaming platform as we know it today, like the big box in your living room. We'll see things change quite a lot.

I also think that we'll see more and more indie games, and we might see less and less big triple-A games, just because of the cost. We'll see lots of cases where small indie studios manage to create games that are played by a lot of people. That's solely my opinion, that we might see more and more indie games, as opposed to maybe the blockbusters – which will always stay there, but I think we'll see less of them.

Ben Hall: Yeah, I totally agree. I think streaming is the future. I think in the next 10 years, we're definitely going to see all gaming platforms move to a streaming service. It's going to be very interesting to see how the big three [Sony, Microsoft, and Nintendo] react to what Google's doing with Stadia.

I think it's really exciting, and I think we're going to see a change in the way people make games, but also a change in the way people update games. The fact that we're no longer going to be relying on A, a boxed product, and B, the need to go through multiple steps to get things released to people. The fact that we can just update things in the background will be a huge change.

We can change graphics. We can change the engine. We can change so many different parts of the game and let players continue to play their version of it. I think it's going to be so powerful that we're going to see a massive growth in bigger games with bigger worlds, with more content getting added post-launch. So games, I think, are going to become a much more fluid, and dynamic, and living product. They're going to evolve into a different system.

How do you think technologies are going to evolve and shape tomorrow's gaming experience?

TD: The biggest game company in the world right now is Tencent. It's mostly mobile games. And the biggest market in the world is probably Asia. And the games they are looking for are multiplayer games as well, so they don't play co-op or single-player games much. I think that it's going to be a trend all over the place. I think games will only become more easily accessible, and probably be updated through the web. I think that's the future.

BH: Well, I think the evolution building on what Nintendo did with the Switch, of being able to sit down on your couch and play a game streamed to your TV, and then when you need to get up and leave you just switch it across to your tablet or your phone. And the fact that the whole thing can be streamed now, I think it's just going to open up the possibility of triple-A games on cellular devices for everyone everywhere. And I think that's really fantastic.

How do you think your jobs are going to change in the next 10 years?

BH: I think collaboration and community-created content are definitely coming trends, and we're going to see a big increase in that. But I think there's always going to be a place for bespoke videogames that people like myself and Thierry can concentrate on as a job, full-time, to be able to build these epic worlds. I think we're going to get to a point where we need to build bigger worlds, and I think we're going to just have to work more efficiently on how we use tools, and how the teams operate, and how the teams work to be able to build and create bigger, more detailed worlds for people to lose themselves in. I think as creators, we'll probably always have a job, because you need creators.

TD: I think the content will be also given to the players, so it's going to be more like a hybrid thing, where the player community meets the game developer, and they're both creating something together. That's probably where we're aiming for, right?

How do you see gaming influencing other industries in the future?

BH: I think we're already starting to see the gaming industry influencing how different industries utilize our technologies. The movie industry is already starting to use things like Unreal to build, to previsualize elements of how the movie is going to look. Or they're using it on motion-capture floors to be able to communicate to the actor what it is they're going to be seeing; real-time effects, essentially. So I think there's already a crossover happening.

I think maybe in five-to-10 years, we might get into a situation where movies are almost interactive. The two media blending together, bleeding together, as videogames get more realistic, and as movies need to be able to tap into more interactivity – I think we'll start to see a crossover. But I think it will become a genre, a thread, rather than the norm. So people who want to watch an interactive movie can, but I think it won't replace traditional videogames, with a controller.

TD: I think gaming will offer another type of life experience. When people want to see something else in their life, I think they will be able to live another life through games. Especially with what we are seeing, it's going to be more and more realistic.

What are the most exciting challenges you faced at Ubisoft, and what are your proudest achievements?

TD: I have to say that my most challenging achievement at Ubisoft was definitely Assassin's Creed Syndicate, because it was a very challenging production as opposed to Odyssey, where everything went very smoothly. I think we learned a lot on Syndicate. That's why we changed the way we worked with our team, to delegate across our people, have them more involved. All those lessons made Odyssey, at least for me, something very easy, and completely different from Syndicate. I think Syndicate was my biggest challenge, and Odyssey my biggest achievement.

BH: I joined Ubisoft in 2014 during Syndicate's development, and I kind of mirror that, in that there is a massive amount of achievement to take away from Syndicate. It was the first time Ubisoft Quebec was leading a project, and I think we learned so much during that process. The game itself was incredible; it was a great game. As a group, we came off the back of Syndicate knowing that we just wanted to make things better.

During the entire three years of production on Odyssey, we just wanted to continuously improve the way we work, the way we communicate, the way we delegate. Creating a game that we just wanted to come back to work every day and play was a fantastic achievement. And I think I'd probably say that the production process of working on Odyssey has been one of the best for me in my whole career. I think the achievement of what we managed to create as a team globally, as well as the core in Quebec, is fantastic.

TD: At the end of the project, when you think most people would be fed up with the game, we were still seeing people in the studio playing it all the time. People did actually enjoy playing the game, and that tells us that the production went very well.