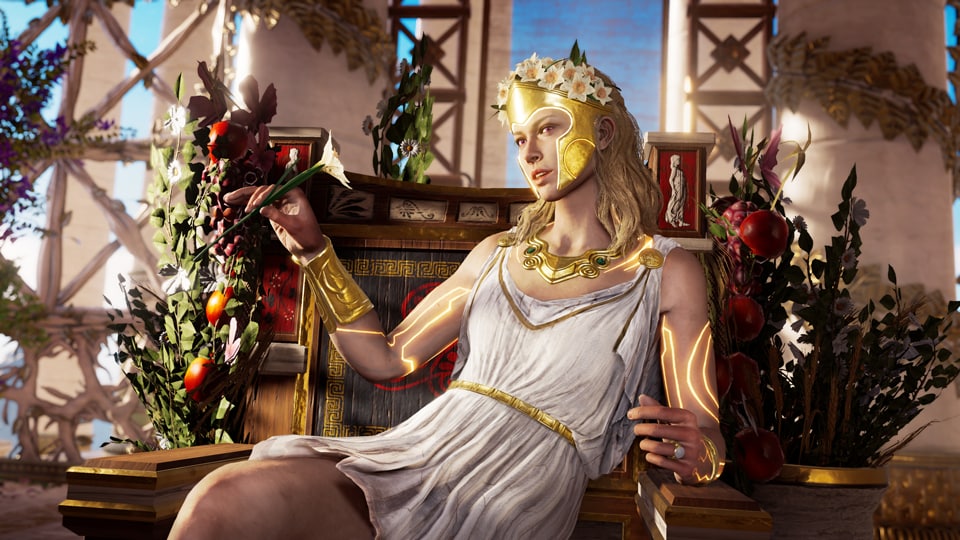 Fields of Elysium, the first episode of The Fate of Atlantis story arc for Assassin's Creed Odyssey, is out now, opening up an entirely new (under)world for players to explore. Sending Alexios or Kassandra on a quest into the Greek afterlife, it adds a new region – the titular Elysium – to the game world, filled with strange new enemies to fight, new powers to unlock, and an expansive new storyline centered on the mysterious First Civilization, or Isu.

Available as part of the Season Pass or as a standalone purchase, The Fate of Atlantis is available to players who've reached at least level 28 and finished the Between Two Worlds questline, as well as The Heir of Memories questline that follows Between Two Worlds. There's also a shortcut option for players who want to jump straight into The Fate of Atlantis with a new game, although it won't let you carry over your progress to the main campaign, or earn achievements. The afterlife brings many changes to Odyssey so here's a look at what you can expect as you begin to explore Greek mythology's final resting place of heroes.

Delve Into the Underworld

The Fate of Atlantis' version of the Fields of Elysium are a simulation of the Greek afterlife, created by an Isu named Aletheia. Simulation or no, Elysium – connected to Greece by a fast-travel portal – adds an expansive new area to the game world, an island of beauty located somewhere in the depths of Hades. It's filled with rolling fields covered in bright flowers, bustling settlements perched atop dizzying cliffs (with teleporters for rapid ascension), and what seem like miles of secret underground tunnels and caverns. Free-roaming exploration is encouraged and rewarded, as the landscape is riddled with opportunities to earn new skill points and powerful gear.

Elysium is also home to a number of outposts for you to raid and loot. Some of these are massive, labyrinthine complexes filled with treasure, and three are overseen by formidable women straight out of Greek myth: Atalanta, Iphigenia, and Aegea. Big or small, all of the new outposts feature a new type of objective: the Torches of Hypnos, glowing mind-control beacons that can only be destroyed by a well-aimed arrow.

This is a realm ruled over by members of the First Civilization, none of whom are quite what they seem. Persephone, Hermes, and Hekate will have missions for you, and your choices can determine whether you gain their favor, their betrayal, or their wrath. You'll also meet plenty of mortals, alive and dead, who need your help – and this being the afterlife, you may even encounter a familiar face or two.

The Isu command legions of mind-controlled human soldiers, whose powers make them feel more like battling Medusa than rank-and-file troops. Some of their abilities, like the force waves kicked up by heavies, or the spearlike energy weapons all Isu soldiers can summon, can do damage and knock you off balance. Others, which take the shape of targeted lightning strikes and bubble-like energy domes, freeze your adrenaline for several crucial seconds, effectively blocking you from using any of your own Abilities.

Then there are the Kolossi. While nowhere near as big as their name implies, these spear-wielding bronze statues will come to life if you make any trouble near them. Their metal bodies can absorb a lot of damage, and they're fast, able to abruptly zip out of striking range and unleash devastating energy beams. Keep dodging and striking, though, and you'll reduce them to rubble.

While your enemies are powerful, your mission in Fields of Elysium is to become even more so; Aletheia created the simulation, after all, as a way for Kassandra or Alexios to begin unlocking advanced First Civilization powers. Scattered throughout the underworld are four Keeper's Insights, secret tablets that unlock enhanced versions of your existing Abilities (once those Abilities have been fully leveled up). In Fields of Elysium, these include:

Depending on your preferred play style, these enhancements can give you a vital edge over your powerful new adversaries (to say nothing of your enemies out in the larger world of Ancient Greece). No additional skill points are required to unlock enhancements, and if you prefer not to use them, you can toggle them on or off via the skill tree.

Meanwhile, players hurting for skill points will find numerous opportunities to earn them quickly in the form of Marble Maiden Tributes. You can find these statues of Persephone throughout the landscape, and smashing them gains you a skill point; just be aware that each one is surrounded by a handful of guards who don't take kindly to iconoclasts.

All is not well in Elysium. Not everyone is happy with Persephone's rule, and some of her subjects – both alive and dead – are working to undermine and ultimately overthrow her. Led by Adonis, one of Greek myth's most supernaturally handsome mortals, the rebellion's goals often run counter to those of Elysium's Isu rulers. Sometimes, missions will force you to decide which side to support, with your actions carrying possible long-term consequences. And sometimes, you'll need to attack and undermine your rebel friends in order to advance your own goals.

You can make it up to them, however, by recruiting new troops to the cause. The Isu soldiers are under mind control, and if you can break that control, they'll immediately join the rebel cause. To do this, you'll need to knock them out with your fists, after which you'll use a powerful artifact to liberate them and send them to bolster Adonis' ranks for a final, decisive battle.