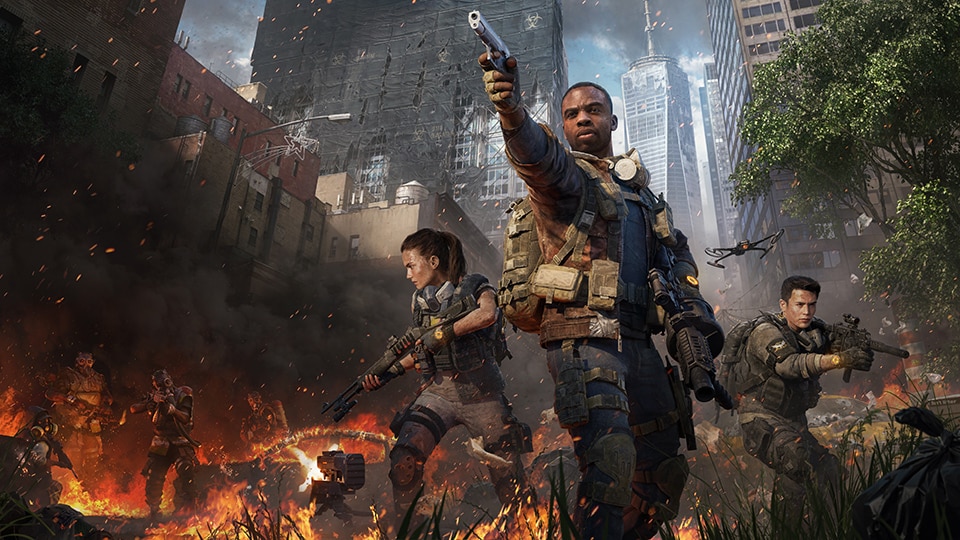 In the four months since the launch of Stadia, Ubisoft has released four games on the streaming platform: Assassin’s Creed Odyssey, Ghost Recon Breakpoint, Trials Rising, and Just Dance. With the impending release of The Division 2 on Stadia (with cross-play and cross-progression support for PC and Stadia players) on March 17 and Ubisoft’s recommitment to the GeForce Now platform, we checked back in with Chris Early, senior vice president of partnerships, to dive deeper into the company’s ongoing support of these and other streaming platforms, as well as to get updated on the challenges still facing the technology.

What kind of engagement are we seeing on Ubisoft games available on Stadia? Are we seeing an inherently different kind of behavior?

Chris Early: For Ubisoft, it tends to break into two broad categories. One is the experimenter; this looks like somebody who came on and played for a couple days, and then we haven’t seen them again. This could be somebody who is press, industry, an analyst, or an early adopter who’s just looking to see what the experience is like. They played probably a couple different games, not for very long, and they sated their appetite and that was that. They had their questions answered.

The others, I would say, are traditional game players, even if streaming is far from “traditional.” Their behavior mimics what we see with other players of the same game. Their play pattern is not particularly different. They are not playing less time; they’re not playing more time. If anything, they’re playing slightly more sessions, at slightly shorter durations.

What’s great about streaming is people will just start up and play. And I know that was true for me when I’d been playing in the streaming environment. If I sit down to game with an Xbox or PlayStation, I’m planning on a couple hours. But if I can just fire it up really quick, I might find more windows of time to start playing, like if I’m waiting to go out or something. And with Stadia, you can certainly play with much shorter play sessions.

We’ve also got some statistics from the people we already knew were Uplay members. And we saw over half the people that played on Stadia had played on a PC before.

Given that the upcoming release of The Division 2 supports cross-play between PC and Stadia, it seems like a natural progression to enable more people to play with each other on different platforms. Is this an ongoing goal for Ubisoft moving forward, particularly as it relates to Stadia, or is it more of an overarching thing that Ubisoft wants to accomplish?

CE: Cross-play and cross-progression are goals overall for Ubisoft. Not just between PC and Stadia, but between all the platforms. What we want to enable our players to do is to have the freedom to play their game wherever they want to. In the case of The Division 2, as we’ve tested it, I’ve been a big Division player on Xbox for quite a while, and it’s quite fun to then fire it up on my mobile and be able continue on. Now, I’m not nearly as good in a match environment, but I certainly can do many things on mobile that I wouldn’t necessarily want to sit and do in front of my big-screen TV. So it’s an interesting complement so far.

The Division 2 is a game that’s well-suited for this type of service; it allows you to just jump in, maybe complete a few activities, and then jump right back out.

Previously, we announced UPLAY+ would be coming to Stadia. Is that still part of Ubisoft’s plans? For streaming in general, there’s Stadia, Project xCloud from Microsoft, PlayStation Now, and of course GeForce Now. How do we evaluate these different services? What are we looking at, and what do we look at to understand how to leverage and use these services in a way that makes sense for Ubisoft?

CE: We look at two things: One, how is it deployed from an infrastructure standpoint? Can people all around the world use it? Can people only in a given country use it? Is it well-deployed within the country? More so than the typical physical machine that sits in your house, this depends upon having infrastructure that’s accessible, and a customer that has the bandwidth to be able to access the streaming service.

The other side of it is, how much effort is it for us to have the game work on that platform? And that varies. We’re obviously making Xbox games already, so there’s not a lot of effort for an Xbox game to work on xCloud. GeForce Now is a PC-based service so that’s more straightforward. And for Stadia, or other platforms that are more like a console in their overall game system, it’s more work for us to do. It’s actual development of a different build.

Just to reiterate something we clarified earlier this week, our games will still remain playable on GeForce Now?

CE: That’s right. If someone has already bought one of our games on PC, they should be able to play them wherever they like.

Is having all these competing services making it difficult for people navigate and figure out which ones are which, and which ones make sense for them? Do you see any issues there?

CE: No, I don’t think we’re seeing that kind of confusion at the customer level. If you’re already an Xbox player, with Microsoft coming out with xCloud, you’re going to have a streaming platform available to you. It’s a relatively straightforward choice there. If you’re already a PC player, you already own PC software, and a service like GeForce Now is readily available for you to be able to stream. And if you don’t own a console, or don’t own a PC, then you can look at different choices. You could choose Stadia. You could choose GeForce Now. You could choose xCloud; you have more choice as an uncommitted player, someone who doesn’t have a history of gaming on a particular platform.

"If someone has already bought one of our games on PC, they should be able to play them wherever they like."

What kind of confusion are we seeing right now? Also, it seems like there’s some concern that streaming may cause some perceived devaluation of games. Is that on our radar, or is it too early to tell?

CE: I think it’s important to make a distinction, and make sure that our communities know the distinction, between streaming and subscription. Streaming is just a method of access, whereas subscription is a method of ownership. If I’m going to stream something, I have to have access to that game somehow, and that’s either I buy it, or I subscribe to it through some type of subscription service, like UPLAY+. Both of those allow me to play the game, and now I have to choose how I’m going to play the game. Am I going to download it to a PC I have? Am I going to stream it? The act of streaming isn’t changing the value of the gaming experience. In fact, the act of streaming makes the gaming experience open to more people, because those folks don’t have to have a full PC or anything to be able to play their game.

Now, the subscription service, on the other hand, that’s where the question of some of the devaluation comes in, and that’s where it’s more of a comparison to Netflix. Netflix is both a streaming service and an ownership model, because you have access to all the video content on Netflix by subscribing. The question then becomes, does that devalue the video content? Or in gaming, does that devalue the gaming content? We don’t believe so. It is a possibility that aggregated services could end up with a problem where you have discoverability, and new games keep pushing down the old games, but when you look at a service like UPLAY+, we have our games going into there, And it’s easy for those people to both access the games and to see the value of the subscription. We believe in the value of the UPLAY+ subscription service because players have access to new releases as well as our back catalog.

Now, will a player who only wants to play one game a year subscribe to a service like UPLAY+? Probably not; they’ll just be a purchaser. But for a user who plays multiple Ubisoft games a year, we are giving them a choice of how they get access to our games.

What do you foresee as being the big breakthrough, apart from infrastructure, that will help usher in this idea of game streaming to a broader audience? It’s easy to think of things like built-in TV apps, and generally easier access. What does that look like to you?

CE: To have that type of ubiquity, from a gaming standpoint, means that number of people have to be familiar with playing HD games. I think we’ll see a continued expansion of the different strata of where players play. Today, most Ubisoft players are playing HD games, 40-, 60-, 80-, 100-hour games. And then we have a few games that are our more casual games, and it’s quite interesting to see someone who’s been playing, consistently, Rainbow Six switch and play UNO for a while. And I think that’s a choice that people make, because both games are fun. They’re engaging for a gamer, yet they lend themselves to different attitudes in play. One’s much more of a lean-in, one’s much more of a lean-back style of gameplay.

The challenge is that playing UNO in your living room on a 65-inch TV with your console is good for some period of time, and then that’s probably about it. You’re going to move on to a regular game again. But by having the ability to stream well to mobile devices, now you have what could be short-play-session casual games that could be played in many places where you might not want to engage in a match of Rainbow Six or in a session of The Division, because you could be interrupted at any time. But interrupting a casual game that you’re playing by yourself is an easy thing to do.

To get there from a technology standpoint, means that we need to drastically improve the bandwidth to mobile devices. Today, most streaming only works on mobile devices on the home, because you’re streaming from your home router to your phone. Until 5G gets deployed on a broad basis, we just don’t have the bandwidth outside, away from the home, to be able to stream properly to phones. Bandwidth caps are also a concern, but I think that, as we’ve seen over time, those caps tend to rise as use of the internet tends to grow.