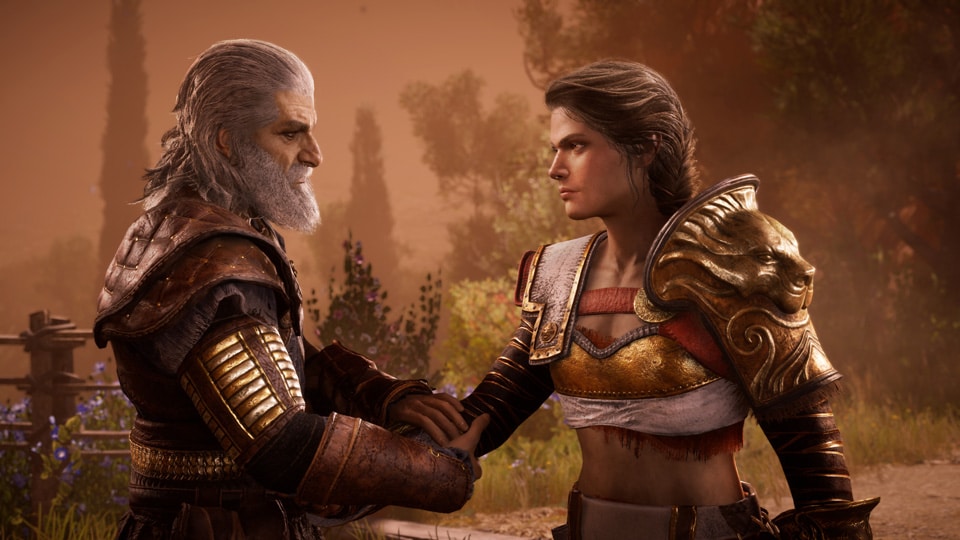 Bloodline, the third and final episode of Assassin's Creed Odyssey's Legacy of the First Blade story arc, opens like the calm before a storm. Your misthios returns to the little village of Dyme after a lengthy absence, and spends the episode's early moments hunting boar, gathering shellfish, and enjoying a simple life. This domestic peace doesn't hold for long, though, and as Legacy of the First Blade crashes toward its fiery conclusion, you'll learn more about the Order of the Ancients, discover a connection with Assassin's Creed Origins, and unlock an extremely useful new Warrior ability.

That ability, Fury of the Bloodline, traps your opponent in an unbreakable flurry of devastating strikes with the Spear of Leonidas. What makes it special, however, is that executing it fills up three bars on your adrenaline meter. You read that right: spending one bar of adrenaline to activate Fury of the Bloodline gets you three in return, enabling you to launch immediately into an Overpower attack. You can also use that adrenaline to heal, let fly with a storm of Rapid Fire arrows, or use any other abilities at your disposal. If you prefer to fight toe-to-toe with enemies, Fury of the Bloodline quickly becomes indispensable, especially during battles with the powerful leaders of the Order of the Ancients.

Set mainly amid the port towns and crumbling ruins of Messenia, a southern coastal region, Bloodline sees either Alexios or Kassandra once again encountering white-bearded proto-Assassin Darius, and embarking on a quest to cut their way to the heart of the Persian conspiracy that's been hunting them. The new episode is substantial, with highlights that include rescuing Spartan helots from slavery, meeting your misthios' biggest fan, and tracking a trio of conspirators until you can identify and assassinate one key Order member (or just going berserk and killing all three, with the caveat that doing so alerts a fort's worth of Cult of Kosmos guards). There's even a naval battle against a Spartan fleet, in case you were looking for an opportunity to use the Chimera's Breath flamethrowers you added to your ship in Episode 2.

Bloodline also adds a new branch of the Order of the Ancients to hunt – the Order of Dominion – and gives you a fresh incentive to find them and any other un-hunted members. Completing Bloodline grants you a powerful new weapon, but it's broken; to repair it, you'll need special items carried by the Order members. Bloodline is a chance to delve further into what defines your misthios, and to find out how the Order of the Ancients views your actions. Will you be the fire that consumes the ancient world, as they fear, or a beacon of hope in the ages to come? You can find out when Bloodline concludes the Legacy of the First Blade story arc on March 5.

Your misthios' adventures won't end there, of course. The second episodic post-launch story arc, The Fate of Atlantis, is coming soon to Season Pass holders, and more Lost Tales of Greece are on the way to all players for free. Additionally, Season Pass holders will also get access to Assassin's Creed III Remastered, which includes Assassin's Creed Liberation Remastered and launches on March 29.