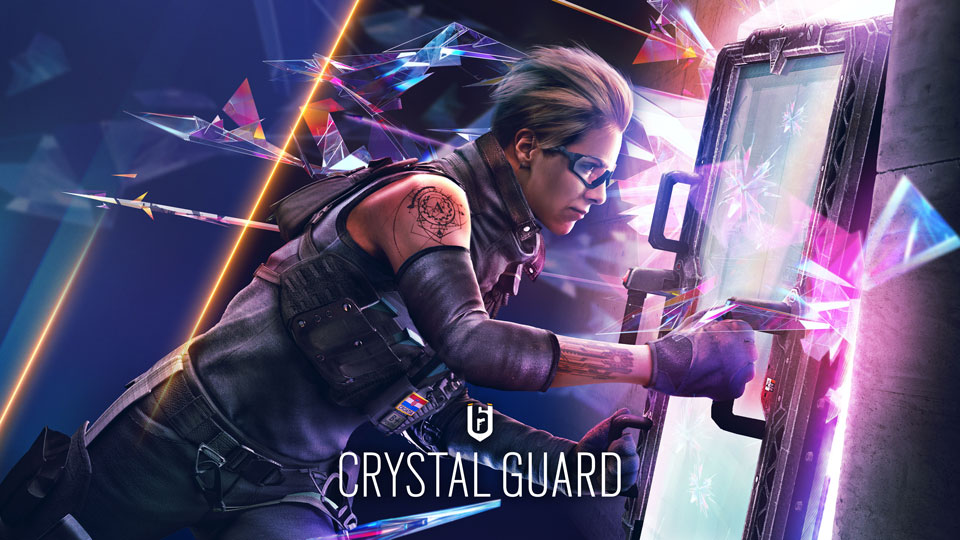 Osa, a new attacking Operator, is bringing transparent deployable bulletproof
shields to the hallways of Rainbow Six Siege when Crystal Guard, the third
season of Year 6 of Rainbow Six Siege, launches. Deployable on the floor, in
doorways, or in windows, Osa’s shield will give Attackers a chance to
reconfigure the battlefield to their advantage by building up defenses instead
of tearing them down. Osa will be available at launch through the Crystal Guard
Battle Pass, and can be unlocked two weeks after launch with Renown or R6
Credits.

Crystal Guard will also be delivering some free updates to all players,
including balancing tweaks for Twitch, Fuze, and IQ; map updates for Clubhouse,
Coastline, and Bank; and a rework for flashbangs.

Osa and Her Talon-8 Shields

Osa is an innovative engineer hailing from Croatia and recruited by Kali’s
Nighthaven organization. Osa joins Team Rainbow as a medium-speed, medium-armor
Attacker, armed with the 556XI assault rifle or the PDW9 submachine gun in her
primary slot, and the PMM handgun as her secondary weapon. In addition to these
formidable tools of attack, she can also protect herself and her allies with her
Talon-8 Clear Shield. This gadget brings a little bit of defense to the offense,
as Osa can set it up to offer bulletproof cover in otherwise-exposed positions
to help Attackers dig in and push on.

But there are some big differences between the Talon-8 and the Defenders’
deployable shields. While they’re roughly the same size, the Talon-8 is taller
and protects Osa’s head when she carries it, unlike the deployable shield. Also,
it’s see-through; you can see your enemies, and they can see you. This can lead
to some pretty intense stare downs that might end abruptly with a quick pop-up
from the Attacker or with a Defender taking out the shield with an impact
grenade or Nitro Cell. The shields can also create standoffs that destabilize
the Defenders’ position; it limits your options when you know there’s a sight
line that Attackers can safely watch. Osa’s shields can establish angles in key
doorways, down lengthy hallways, or from the bottom or top of a window, as she
can deploy them while on rappel. Combine that with the shield’s ability to
destroy wooden barricades when deployed in a barricaded window or door, and Osa
can make a room very dangerous very quickly.

Defenders can deal with Osa’s shields in a couple of ways. Explosives will
destroy them easily. Smoke’s Gas Grenades and Tachanka’s fiery Shumikha Launcher
can be used to drive any Attacker behind the shield out of position; and Clash
can just walk right up to them for the ultimate transparent shield showdown.
Defenders can take away that transparency by meleeing the shield to shatter the
glass, but Attackers can do the same if they prefer to operate away from prying
eyes. Much like Mira’s Black Mirrors, Osa’s shields also have a pressurized
canister that can be punctured to drop the shield entirely.

With smoke grenades or a claymore to round out her loadout, Osa brings a lot of
utility to help modify the battlefield to her allies’ advantage and set up
formidable fortifications to give the Defenders a taste of their own medicine. A few other Operators are in the spotlight in Crystal Guard, including Twitch,
whose shock drones will now be able to jump just like their recon counterparts.
They’ll also shoot a laser instead of a projectile, meaning there’s no
projectile drop-off to contend with as you zap anything that dares defy you.

Fuze will now be able to use his cluster charges on reinforced walls and hatches
to deliver his grenades to exciting and dangerous new locations. The device
timer will take a bit longer on a reinforced surface, as well as on Castle’s
barricades, and the first projectile through will create a hole that allows
Defenders to shoot the device and halt the deployment of the full complement of
explosives. Note that this hole will not become a peek hole after the canister
is dispatched.

And finally, IQ will now be able to smart ping with her Electronics Detector,
marking specific gadgets for her allies’ awareness. This upgrade includes a
little indicator in the top right corner of her device window showing what
gadget she’s about to ping, adding a little bit of extra intel to your intel.

As for maps, Crystal Guard is handling things a bit differently than previous
seasons by delivering small updates to three maps as opposed to a major rework
to just one. While each was tuned up to bring destruction, lighting, and gadget
placement up to modern Siege standards, there are some specific tweaks you’ll
want to look out for.

In Clubhouse, for example, the Bar and Stock Room bombsite is now just the Bar
bombsite, with the Stock Room bomb being moved to the Bar Stage area and new bar
door added to help with on-site rotation. Plus, some new outdoor pathing by the
kennels will allow quicker outdoor maneuvering. Over at Coastline, the big window in the VIP Lounge has been replaced with a
destructible wall, and Attackers on the DJ Booth balcony can now rappel up to
the roof. On the interior, windows overlooking the courtyard can now be
barricaded, and there’s a new window inside the first-floor reception and
service entrance area.

The third and final updated map is Bank, which has been spruced up with more
cover points on the top floor. Additionally, the windows that looked into the
top floor from the parking garage have been largely blocked off. Elevators have
been expanded to give a little more room to maneuver; there are no more vertical
bars in the vault; and there’s a new hatch location to consider in the lobby.
Out front, you’ll notice the cars offer a bit more cover to Attacker spawns, and
there’s a new alleyway from the Jewelry spawn to the back alley/terrace area
that gives you another option besides jumping down a manhole. Note that these
are just some of the updates coming to these three maps, you'll have to explore
yourself to find them all when Crystal Guard launches.

Crystal Guard is also bringing some changes to how flashbangs work to make them
more reliable. This change and the map updates and the Operator balancing tweaks
will be free, for all players, when Crystal Guard kicks off. Osa, the new
Operator, will be unlockable through the Premium Track of the Crystal Guard
Battle Pass when the season launches, and unlockable two weeks after launch with
Renown or R6 credits.

To watch the best competitors in Rainbow Six Siege battle it out in the Mexico
Major
from August 16-22, tune in to
twich.tv/rainbow6. Rainbow Six Siege is
available now on PC, Stadia, PS5, PS4, Xbox Series X|S, and Xbox One. For more
on the game, visit our Siege news
hub.