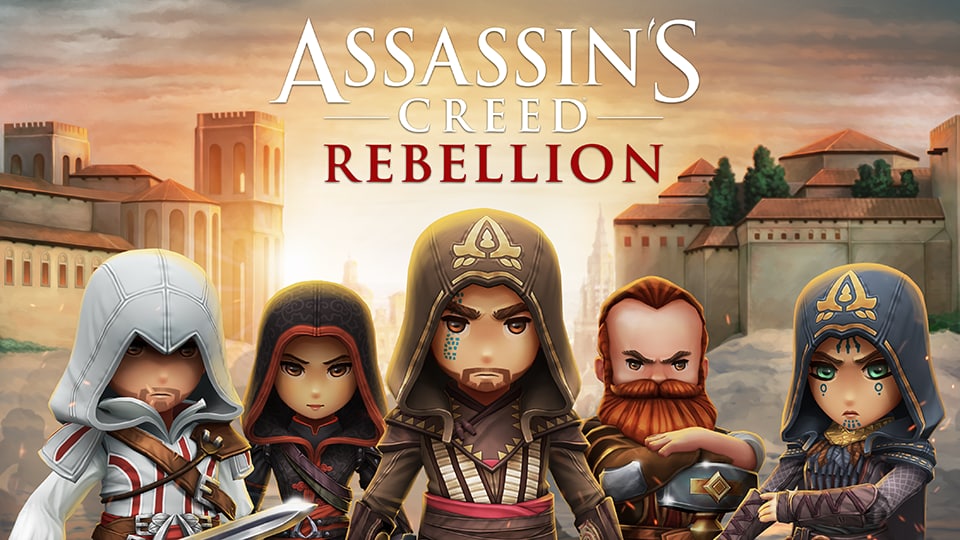 Assassin’s Creed Rebellion – Behind the Scenes

Assassin's Creed Rebellion is a new mobile game in the rich and expansive world of Assassin's Creed. Set during the Spanish Inquisition, Rebellion introduces a new creative formula to the established franchise. By recruiting Assassins — both newcomers and legends — from a variety of time periods, players build up their Brotherhood and take the fight to the Templars through tactical turn-based missions.

How did Rebellion come to be?

Jonathan Lavergne: Ubisoft Mobile was looking to create a new Assassin's Creed mobile game. We were looking for a game that really fit what the platform is best at, and we discussed many concepts with internal and external studios.

Some team members at Behaviour Interactive, which originally developed Rebellion, happened to be longtime fans of the Assassin's Creed franchise. They came to us with an interesting pitch that kick-started a close design and development collaboration between them, Ubisoft Mobile, and the Assassin's Creed brand team.

What's unique about this game?

JL: Since the very early stages, Assassin's Creed Rebellion was built around a solid creative vision with one clear goal in mind: expanding the AC franchise to mobile in a way that made the most sense.

We wanted to be faithful to the brand's gameplay DNA, but still tailor the experience for mobile. That's how we distilled and re-imagined the gameplay pillars of stealth, assassination, free-running, and combat into a new strategy-RPG gameplay experience that worked on mobile. The result is short, turn-based missions, during which you lead a team of three Assassins to infiltrate unexplored enemy strongholds.

Aymar Azaizia: Whenever we are working on a new medium or platform, we to find a way to translate the brand into something faithful. We wanted to celebrate our characters, allow players to spend time with a lot of them, and use them to fulfill specific missions with a variety of approaches like stealth, combat, assassinations, and parkour. So we are really happy about what the game brings to the franchise!

JL: We wanted to give players the ability to forge their own Brotherhood by collecting a varied cast of legendary Assassins. For the first time in the franchise's history, players can team up multiple Assassins simultaneously. As the game explores multiple time periods, players can assemble a dream team of characters including Ezio, Alexios, Kassandra, or Bayek, and take them to battle.

As big fans of Japanese RPGs, manga, and anime, we also took the decision to go for a brand new art direction, with a unique "chibi" look.

AA: The concept of the game allowed us to offer a whole range of characters, and push for variety and "what if" moments, rather than being ultra-realistic and restrictive. That's also true for the art style; we think our characters are super cute that way. Cute little Assassins!

Etienne Allonier: I think the new art direction and a strong gameplay basis helped us appeal to newcomers to the franchise, as well as our established fans.

JL: Additionally, we wanted to expand upon the management features that appeared in previous Assassin's Creed console games. Players can build their own Brotherhood headquarters and manage their Assassins' activities. The headquarters management is an important part of the game, but takes a back seat to the strategic mission gameplay.

How does the game differentiate itself from other Assassin's Creed games?

JL: An exciting point for us was that ACR's core setting is Spain during the Inquisition, which was introduced by the Assassin's Creed movie. As we made this setting our own, it created an interesting and exclusive opportunity to expand the story of Aguilar's Spanish Brotherhood fighting Torquemada's Inquisition. I can't wait for players to discover how that story ends!

AA: We did spend time with the developers, sharing information about that specific setting, and defining what could be their sandbox to create a great experience while remaining consistent with Assassin's Creed lore. The challenge was then to introduce new characters and a plot that would make sense, and I think that we all managed to expand our universe while offering a great, entertaining new storyline.

Could you tell us more about the crossovers with other titles from the franchise?

JL: One of the features we're most excited about are the Helix Rift Events! During these events, players can take their Assassins on Animus missions, explore different franchise settings outside of the Spanish Inquisition, and bring back legendary Assassins from those timelines! From ancient Greece to the Industrial Revolution in London, this opened the door for us to play with content from any existing Assassin's Creed game.

AA: We have a tradition of allowing ourselves to break the rules and keep players on their toes. We use the fact that the Animus is a simulation to play around and bend reality. That's how we ended up with a Raiden skin in Assassin's Creed Brotherhood, an evil King Washington with a super-powered version of Connor in Assassin's Creed III, or Rifts in Assassin's Creed Unity or Syndicate. It is indeed a cool feature to see appear in ACR, I agree with Jo on that one!

What are your plans for the future of Rebellion?

JL: We will constantly add and run regular, time-limited Helix Rift Events to give players something new to look forward to. We'll progressively open additional Assassin's Creed settings to play in.

Further down the road, we are looking to add stronger social and competitive features to the game. Our plan is to support the game for as long as our players keep playing it. Our ambition is to keep them entertained by listening carefully to their feedback.

Our hope is to help expand the reach of the Assassin's Creed franchise. Thanks to the accessible, free-to-play nature of our game, we can reach a large audience, and welcome new players and new fans to a franchise that we have loved for more than 10 years!

EA: We know that there are still a lot of players worldwide who play exclusively on mobile. The RPG direction and the free-to-play approach will also allow these players to get in on the fun. We're very happy to see the franchise evolving and adapting to a wider range of gamers worldwide. And as Jonathan said, we have lots of surprises and new content to help players discover the richness of the Assassin's Creed universe.

Assassin's Creed Rebellion is now available for free on the App Store and the Play Store.

The time-limited event "The Mask of The Ibis" introducing brand new missions in Ancient Egypt will be available in-game from April 4-7. For more on Assassin's Creed, check out our previous coverage.