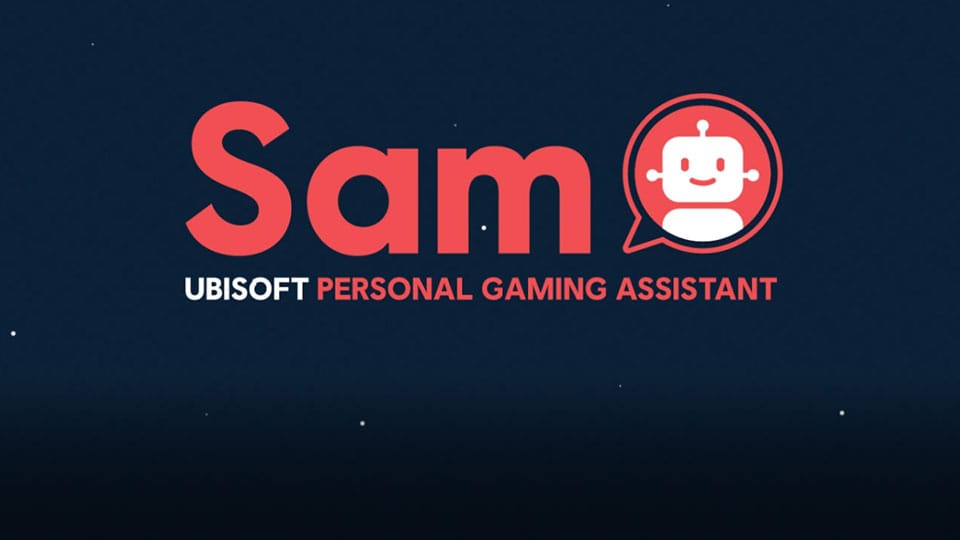 How Ubisoft Built Their First Personal Gaming Assistant for Players

Ubisoft Barcelona's Charles Huteau has a reputation as a longtime "weird tech" explorer. He got his start at Ubisoft Montreal working on Kinect fitness games like Shape Up before moving on to Ubisoft's first VR title, Eagle Flight. Today, Huteau works as creative director for the Ubisoft Club app, and heads up production on Sam, the first personal gaming assistant designed specifically to serve Ubisoft players. And at the 2019 Game Developers Conference, Huteau gave a talk on how Ubisoft created Sam.

Sam debuted worldwide in June 2018 as part of the Ubisoft Club mobile app. While it's still in beta, the personal gaming assistant continues to learn and grow more helpful and functional for gamers. Log into your Ubisoft Club app, and Sam will be able to give you personalized and detailed information based on your gameplay in Rainbow Six Siege, Assassin's Creed Odyssey, Far Cry 5, Ghost Recon Wildlands, The Division, and The Division 2 (with new games continually being added). By using direct player data, Sam can provide personalized stats and tips unique to each user.

The project that became Sam started back in March 2017, at the Ubisoft Club's annual hackathon. The winning team's mission was to "a new way to deliver useful game data to players while they are playing." From this idea (and with a little inspiration taken from Iron Man's AI assistant JARVIS), Sam was born as a way to give players access to in-game stats with a hands-free user interface. Today, Sam does much more than just give you stats.

"We had two ideas that emerged from the prototype," says Huteau. "The first was, ‘what if we could ask anything, not just stats?' and the other was ‘what if you didn't have to ask Sam for help?'"

These ideas helped Sam become a platform that can provide walkthrough videos, personalized tips, trailers, technical specifications, and more. The latter idea became the Daily Login feature, which lets Sam detect when you've logged onto Rainbow Six Siege (for example) for the first time in a given day, and provide you with a personalized breakdown of your last play session, or a video tutorial for a map you recently lost a match on. Daily Login has also been adapted to single-player, story-focused games like Far Cry 5, letting Sam provide you with a helpful "Previously On" reminder of what you were up to during your last play session.

One of the earliest hurdles the team faced was teaching Sam to speak, and more importantly, listen. Because inputs can come from voice commands or text commands, Sam needed to be able to decipher all the possible ways a player could ask a question. Even more difficult, Sam needed to understand videogame vernacular, meaning that it needed to understand terms like "weeb," "smurf," or "o7" so that it could communicate with a wide variety of slang-slinging players.

The next step in Sam's development was building trust with players, and to do that, the team created the "First 10 Questions" test. "The theory is that if a chatbot can successfully answer your first 10 questions, it will win your trust and you'll be more forgiving in the future if it's unable to answer something," says Huteau.

As it turns out, most of the initial questions that people ask chatbots – even ones specifically designed for gamers – have nothing to do with videogames. They're the same questions most people ask when they first meet someone, like "How are you?" "Where are you from?" "What do you do?" Giving Sam a personality, allowing it to tell jokes, and letting it answer questions about itself greatly improved user trust, and the hard work seems to have paid off, as 35% of Sam's conversations are not game-related. Today, Sam can participate in conversation on more than 2,000 different topics.

Getting users to trust an AI is a tricky task, and can come down to more than just having the right answers. Users need to think the AI is intelligent, and for Huteau, that all comes down to "fake computing."

"Our inspiration came from JARVIS. When JARVIS talks, it says a lot of things it doesn't need to say," says Huteau. "AIs say things like ‘accessing the satellites, computing the algorithm...they say things they don't need to say about their process, so that they seem smarter to users."

AIs don't need to narrate their processes for you, but by presenting that to the users, it builds a sense of confidence that the AI is truly calculating an answer based on salient information. The result of this is that Sam will often preface answers with phrases like, "Oh, don't move, I've got the answer right here!"

By the time Sam was ready for public beta, the team had learned quite a lot. First, as an AI assistant living in the gaming space, Sam needed to be managed by a live team that could consistently provide the most up-to-date information and memes. Second, the machine learning needed to be fine tuned. Because Sam pulls user-created content, it can have trouble differentiating from an official announcement for Far Cry New Dawn and fan art made for a fictional Far Cry 8.

Sometimes, what your personal gaming assistant can't answer is just as important as what it can. This last learning turned into what the team calls Fallbacks, questions that are asked of Sam that it doesn't have a response to. Every week, the development team scans through the top 100 most common Fallback topics, and decides which ones need to be answerable.

Fallbacks are perhaps the most crucial aspect of Sam's development, because they come directly from users. The more users Sam has, the more it learns and improves, as those users begin to request unexpected things from Sam.

"We tried our best to bridge to Ubisoft games, games in general, or geek culture whenever possible when we receive certain questions," says Huteau. "For example, in the past six months, more than 3,000 people asked Sam to play ‘Despacito.'" While the song may not be related to videogames, the team knew they needed an answer to this question. So they linked out to a Rainbow Six Siege Gun Sync video by TheGhostlyDragon that recreates the song through in-game sounds. A peek at the video's comments shows just how effective Sam was at directing people to the mashup of the popular song.

With hundreds of tutorial videos to pull from, how exactly does Sam know what's best for you? That's where overall playtime comes into effect. The development team worked with individual game teams to determine playtime categories for each title. For example, players who've played less than 20 hours of Rainbow Six Siege are considered Rookies, and will be given basic tutorials. Players with less than 150 hours are considered Advanced and will be given tips accordingly, while players with more than 150 hours are deemed Experts and linked to extremely high-level and professional play sessions.

While Sam is capable of giving you Ghost Recon Wildlands tips and telling you jokes, the AI was also built to be as emotionally understanding and inclusive as possible. The team was intent on not assigning a gender to Sam, so when it came time to decide how the AI speaks, they chose not to give it a standard voice, but allowed it to speak through the voice of your phone. When it came to being emotionally sensitive, Sam was inspired by Replika – an AI built by Eugenia Kuyda that's meant to help users when they're feeling down, anxious, or just need someone to talk to – and given basic emotional support functionality, so if you tell it you're feeling sad today, it will offer words of encouragement and link you to more resources for mental-health aid. Additionally, any users that mention suicide or self-harm are encouraged to seek help and immediately linked to the Nation Suicide Prevention Lifeline.

"If it can help just one person, it was worth the work on our side," says Huteau.

Today, Sam continues to improve based on user feedback. Within the app, players are given the option to up- or downvote recommended YouTube videos based on how useful they are at addressing your specific need. Most importantly, the Ubisoft Club Twitter puts our bi-weekly polls, asking users for their input on new features, content, and games that they'd like to see added. As a live service, Sam is in no rush to get out of beta, as it continues to grow based on user needs. But if Sam's journey through the past six months is any indication, the AI will only become more and more useful to Ubisoft players.

Creative Director discusses permadeath, expanded abilities for DedSec operatives, and what seven extra months of development brought to the fight for London.

Get up to 85% off Far Cry games at the Ubisoft Store from July 12-20, and take advantage of savings on a host of other Ubisoft games.