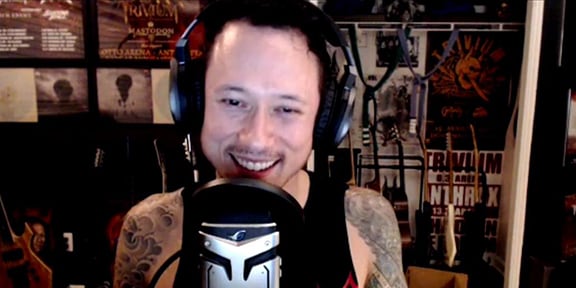 It probably goes without saying that the Rocksmith team is comprised of major music fans. But for all the work we do – analyzing songs, breaking them down, figuring out what makes them work, then rebuilding them in an interactive form that lets you quickly and easily learn to play them on guitar and bass – we don't actually get to talk directly to the artists in our library all that often. So it was a huge treat that we not only get to add three Trivium songs this week – "In Waves," "Strife," and "Built to Fall" – but we also had the opportunity to chat with Trivium's rhythm guitarist and vocalist, Matt Heafy, for an exclusive interview. Here's what he had to say about how he became a guitarist in the first place:

We also talked about his signature Epiphone guitars, asked his advice for players who are learning to play, and discussed how his Twitch streaming schedule keeps him directly in touch with fans. If you want to see the whole interview (and we think you will), join us for Rocksmith's weekly Twitch stream this Thursday, February 15, at 3pm PT/6pm ET/11pm UTC. We'll also be giving away DLC codes for the Trivium Song Pack as well as some great guitar gear from Ernie Ball – but you've gotta be there live to win!

Here's a look at all three songs in the Trivium Song Pack, too:

Rocksmith continues to release fresh DLC every week, from , , and through to , , , and even (). We've got more than 1100 songs for you to choose from – pick whatever inspires you. For us, this week, it's Trivium!