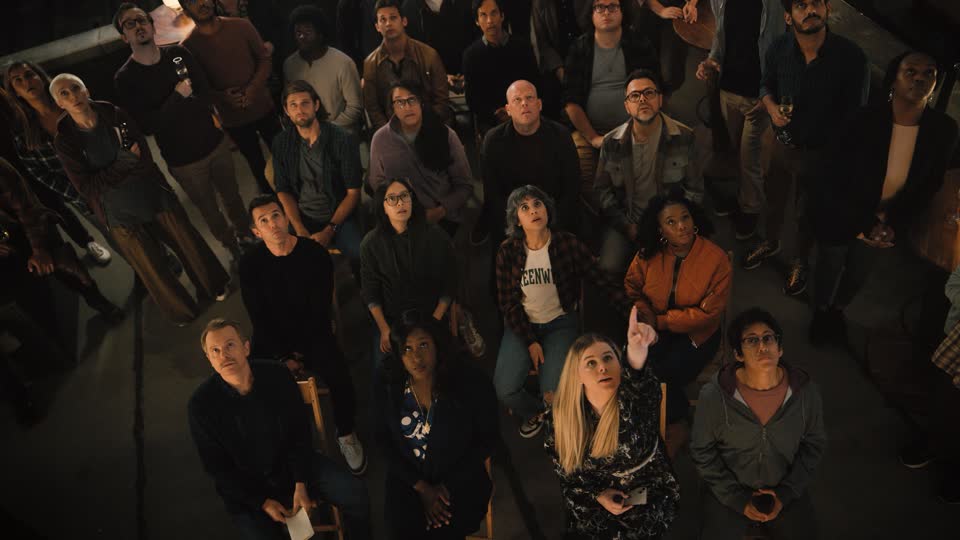 Mythic Quest: What to Expect From Season 3

Mythic Quest, produced by Ubisoft Film & Television, is back for Season 3 this Friday, November 11 on Apple TV+. The new season of Mythic Quest, which follows a group of videogame developers as they work on the eponymous MMORPG, puts its characters in situations they’ve never faced before… leading to some unexpected collaborations as they try to take on new roles (or a fresh sense of commitment to old ones). Here’s what’s in store for each character – and a little insight into what went on behind the scenes - in Mythic Quest’s third season. 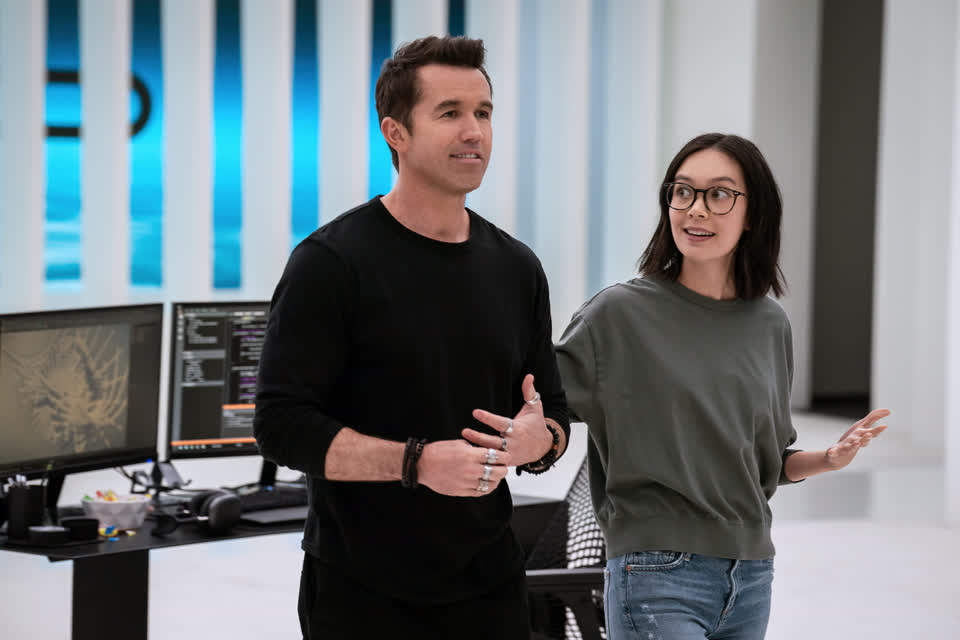 In the new season, Ian Grimm (Rob McElhenney) and Poppy Li (Charlotte Nicdao), two of the show's central characters, have formed GrimPop Studios, a startup devoted to Poppy's game, Hera. For the first time in in the show, the two are equal partners supporting Poppy's game; Ian focuses on the macro vision of the company, while Poppy works tirelessly to build Hera and execute her vision. The two frequently butt heads, especially as Poppy learns to trust her gut and Ian learns to listen to her.

"I really enjoyed getting to play with the idea that Poppy is finally in control of her creative endeavor," says Nicdao. "In Seasons 1 and 2, she's been building a little power at Mythic Quest, but at the same time, she's always supporting Ian's vision. Now, finally, it's her vision, and I think that she's woefully underprepared for that."

Dana (Imani Hakim), freshly graduated from programming school, has joined GrimPop Studios, hoping to put her new knowledge and skills to work. "Going from a game tester to streamer, and now moving into the coding space is really exciting," says Hakim. "Dana gets to work directly with Ian and Poppy and learn so much from them, while juggling their massive egos."

Back at Mythic Quest HQ, David Brittlesbee (David Hornsby) is in charge, and he's excelling without the irrational creatives in the office. He's even managed to bring Mythic Quest to Hollywood, opening an opportunity for a guest appearance from Joe Manganiello. Jo (Jessie Ennis) is at his side, learning to set aside her ruthless thirst for power and showing her softer side.

"It's an embarrassment of riches when it comes to what I'm excited for this season," says Ennis. "I really like that we get to see the softer side of Jo. She wants to make some friends for the first time, and we see what it's like for her to try and bond with other women, something that's clearly very foreign to her."
There's much more collaboration happening in Mythic Quest this season - sometimes in unexpected yet delightful pairings. "I think that Carol is struggling and has no choice but to turn to Brad," says Naomi Ekperigin, whose beleaguered HR rep Carol has been recently promoted.   "I don't think that's a natural good time, but Carol thinks he seems to know the business. She's just been elevated, and now she has to think differently than just hearing people's problems. She will do what she has to do."

In an attempt to make use of her increased power, Carol re-hires the newly reformed Brad Bakshi (Danny Pudi) as a janitor. Brad assures Carol, David, and anyone who will listen that he's a reformed man, only there to empty trash without concocting any schemes. "He's vulnerable, he's coming out of prison. I think Carol needs a win, and Brad needs a win too," says Pudi. "He knows the business, and then Carol offers him this win, which is a chance to get back on the right track." In October 2021, Mythic Quest was picked up for a double season renewal, ensuring a third and fourth season. According to Hornsby, while the creative team generally knew what direction they wanted the show to take for its third season, the security of knowing they would have a season four helped shape the course of the story. "It certainly influences pacing," says Hornsby. "There's a difference between when you know you're going to run a marathon versus when you're going to run a sprint. Knowing we have a marathon of 20 episodes - 10 this season, 10 next - allows us to get a better sense of pacing the story, even if we don't know exactly where we're going that far ahead."

Each season of Mythic Quest so far has included one breakaway episode, which centers on a story set in the past that is seemingly unconnected to the central cast of characters. It's a tradition that continues in Season 3. While Apple TV+ is keeping details of the new breakaway episode under tight wraps, Hornsby was able to shed some light on how the team approaches that episode each season.

"The breakaway episode is something that we like because we're able to tell something, reveal something new about a character's inner self," explains Hornsby. "We don't know what those episodes are going to be going into the season; we may have an idea, but it will change. It has to reflect what's going to serve the season, and the character or story we're going to highlight is going to have to relate to what's going on to help us have a better arc for the season and the story of the season."

All of this on-screen collaboration is just as prevalent behind the scenes. While it's normal for cast members to take on additional roles off-camera - McElhenney executive produces and directs, Hornsby executive produces, and Ashly Burch wrote an episode - Mythic Quest Season 3 saw three directorial debuts and one new writer.

"Writing was so lovely; it was such a great time because, luckily, I'm familiar with everyone going in," says Ekperigin. While this was hardly her first time writing for television - previous credits include Broad City - this season was her first time joining the Mythic Quest writers room, ultimately penning the episode Crushing It. "It was so easy to hit the ground running and come up with jokes. I'm used to just coming in and worrying about Carol, and now I get to have a say in what these other people say to each other," says Ekperigin.

Pudi, who directed the episode Playpen, his first time directing, agrees. "We have a working language with everyone, and it was so exciting. It was also very scary. I didn't go to film school, so there's a lot of technology and terminology that was new to me. I felt like I was back in school, and when I got on set, it was exciting to be able to watch a take, see how you have something in your mind, and see how people take it and elevate it and see all the pieces come together."

"There was a lot of faking it," jokes Hornsby, before continuing in a more serious vein about The 12 Hours of Christmas, his directorial debut. "I made sure that I was prepared, while knowing that I would have to pivot a lot. Mentally, one thing I've learned about having kids and being an adult is there's a talent to being flexible. You know that things are going to change, especially on the spot, especially when you have a ticking clock and a bunch of people waiting for you. So I was prepared with shots and all that stuff, and was mentally prepared to just throw it out."

Burch, who had previously written the Season 1 special episode Everlight, elaborates on the different approach to directing the episode To Catch A Mouse as opposed to writing. "It's a different part of your brain, because the script is really a roadmap for the director. You really have to translate the written word into what it's going to be like in the medium you've written the script for. In preparing, I went over the script over and over again, I tried to visualize it, I wrote a bunch of notes for myself. And then of course, you have to do that, get on set, and be willing to throw it all out if you need to."

Wearing multiple hats creates a deeper level of investment for all involved in the making of Mythic Quest, something that the cast believes can only improve the storytelling. "We all know the show from different angles," says Ekperigin. "For instance, if I'm in a scene with David Hornsby as David Brittlesbee and I want to improvise this or do that, I'm getting feedback from another actor who also happens to be the executive producer who can say 'don't say that.' [laughs] It's nice, because it almost becomes this built-in understanding of the bigger picture beyond the scene you're doing in that moment."

Mythic Quest Season 3 premieres on Apple TV+ on Friday, November 11 with two episodes, and will air one episode weekly thereafter. For more from behind the scenes, check out Ashly Burch's Game Makers Podcast interview, where she talks about writing for a holiday that doesn't exist. For more updates on Mythic Quest, say tuned to our dedicated news hub.