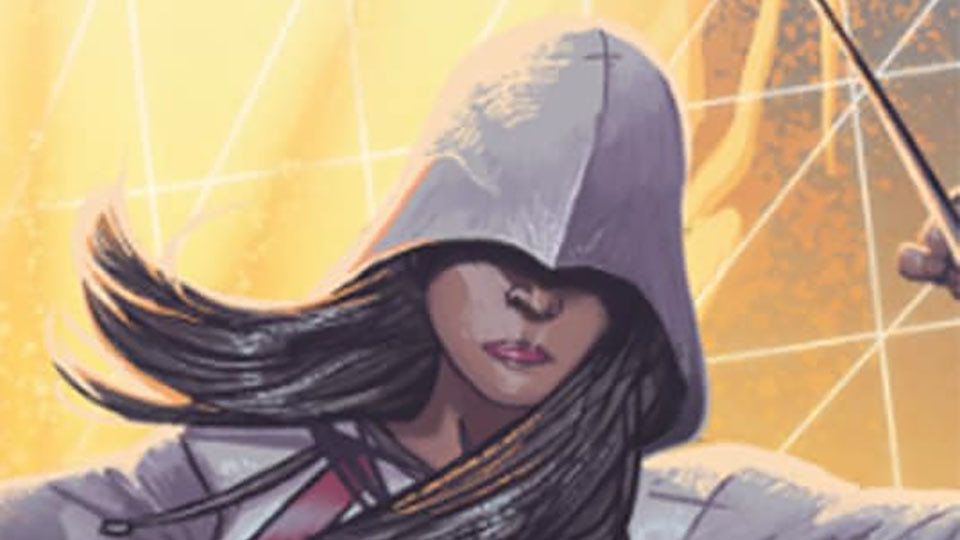 The cover of the third book in the Assassin's Creed Last Descendants series has been unveiled. Last Descendants: An Assassin's Creed Novel Series #3 – Fate of the Gods will be on sale on December 26 in the US, Canada, and UK, bringing the story of Owen, Javier, and the race for the Trident of Eden to a conclusion. We've had a chance to speak with author Matthew J. Kirby about where the series is headed next – but first, here's a quick recap of where it's been. 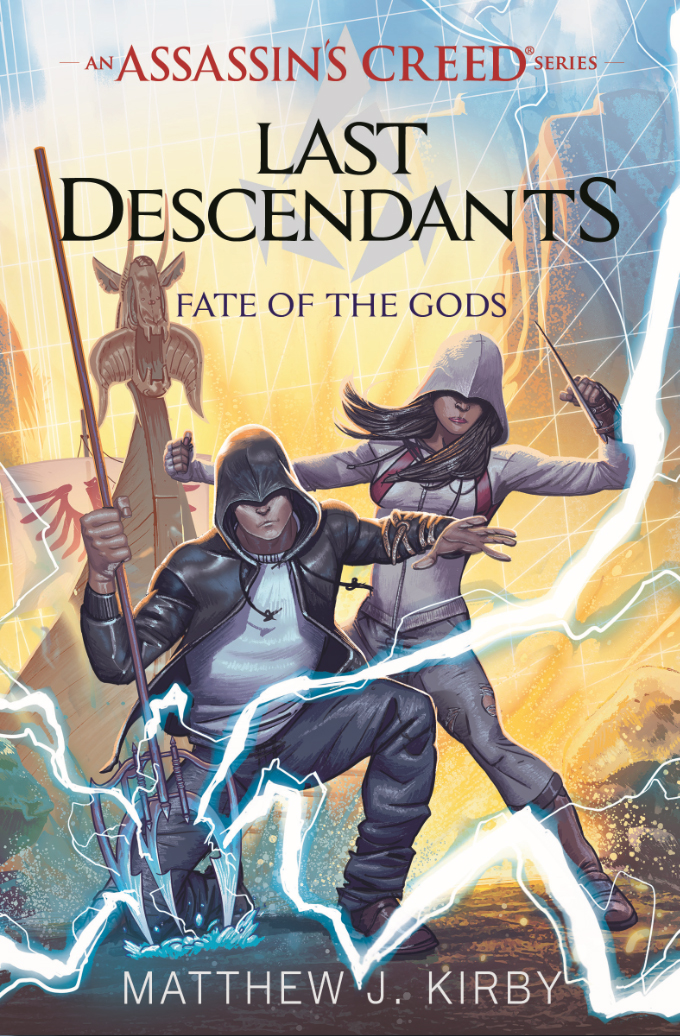 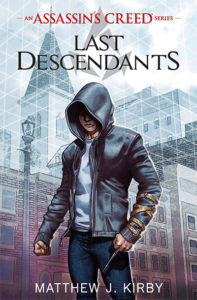 Last Descendants turns the focus of the millennia-long Assassin-Templar war onto a group of six teenage protagonists: Owen, who's convinced his father died in prison an innocent man; Javier, Owen's estranged childhood friend; Sean, a paraplegic former football player; Natalya, a demure young woman who abhors violence; and two siblings, confident Grace and shy, nerdy David. With the help of an enigmatic technician named Monroe, Owen wants to use a stolen Animus to clear his father's name – only to discover that he shares a "memory concordance" with the five other teens, whose ancestors crossed paths multiple times throughout history.

Beginning with a shared genetic memory in New York City circa 1863 – on the eve of the Civil War draft riots – the six enter a multi-user Animus prototype to relive their ancestors' paths on a hunt for the lost Dagger of Eden. The dagger can force people to submit to its user, and turns out to be one-third of a powerful Trident of Eden. Obviously, it's something both the Templars and Assassins want, and both groups raid Monroe's hideout at the same time. 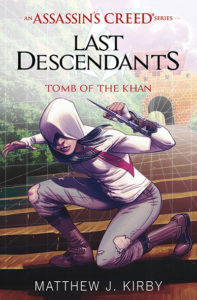 At the Aerie, Sean, Grace, Natalya, and David are persuaded to help the Templars, and begin exploring different memories across history. Working separately, Natalya and Owen experience the same memory (from opposing sides) of a Mongol siege of a Chinese fortress during the Song Dynasty, circa 1259, and discover the resting place of a second Dagger of Eden in the process. Following an Assassin raid on the Aerie, the group splits again along new lines.

Things come to a head in Mongolia, where almost all the characters reunite and the second dagger is found – and paired with the first, creating a threat that neither the Templars nor the Assassins expected to face. As old enemies grudgingly join forces, the race is on to find the third dagger, which lies buried somewhere in Scandinavia's Viking past.

UbiBlog: Where will Fate of the Gods take readers? 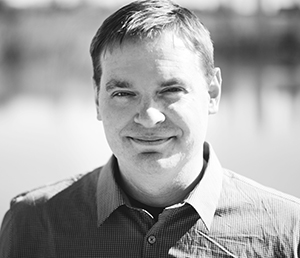 Matthew J. Kirby: The situation at the end of Tomb of the Khan is a little bit more desperate, because the primary antagonist who's revealed at the end of Tomb of the Khan has managed to secure two pieces of the Trident of Eden. And in the third book, they're racing to find the third one before he does, because if he completes the trident, then he will have an extraordinarily powerful relic, a Precursor relic, which will allow him to dominate the world.

The kids ... are now somewhat divided and splintered, in that you've got one of them working with the bad guy, perhaps against his will. You also have these unique (Templar and Assassin) characters who have agreed to work together, but sort of in secret. The rest of the teens are somewhat loyal to both of them, and there are these really interesting tensions and dynamics that are building to a breaking point.

They're trying to work toward a common goal of defeating a common enemy, and that takes them to the historical simulation in the Viking age, the end of the 10th century, where you have these really fascinating historical figures. Like Harald "Bluetooth" (Gormsson), who was the king of Denmark, and at one point also Norway. And you have Eric, the king of Sweden, and then you have this renegade prince named Styrbjörn. They're all sort of in this conflict, as ultimately Styrbjörn is trying to take the throne of Sweden that he believes is rightfully his. It was also a period of conflict between Christianity (and old Norse beliefs), because at that point in history Harald Bluetooth had converted to Christianity, along with much of his kingdom, but Sweden had not. So it's a real time of change and conflict in northern Europe.

UB: Tomb of the Khan covered multiple time periods; will Fate of the Gods be exclusively focused on the Viking era?
MJK: There's one time period, but there is another simulation that's taking place in the book that's really unique. I don't know that we've ever seen anything like it in the Assassin's Creed universe, and it really gets at what the Ascendance Event is, and what the title of the series refers to – Last Descendants. The teens go into a simulation ... of the collective unconscious. So these are memories that are really deep, and they're memories that kind of go back to the beginning of humanity and what makes us what we are, but ultimately they also have to figure out where these memories came from, and going through that simulation takes them back to the beginning. I think fans who are really drawn to the Precursor lore and the First Civilization will be happy.

UB: What was the research like for the various time periods explored in Tomb of the Khan?

MJK: I love the research. When I was an undergraduate in college, I majored in history. And so for me, the opportunity to learn about a place or a time that I don't know much about is always exciting to me. I love to track down primary sources from those time periods, and I love to uncover lesser known periods and events in history that I think are really fascinating.

"I've always had an approach to my writing for young readers, where I never assume that they can't handle something, or that something is too much."

For example, the simulation that takes place in West Africa in the second book. There were empires with cities that were larger than many of the cities in Europe at the time, with advanced technology, that history has obscured. They say that history is written by the victors, and with colonialism and everything that followed from that, so much of that history I think is ignored. So it's really exciting for me to be able to do the research and bring some of those events and places to life that people don't hear much about.

UB: Has writing a young-adult series based on a Mature-rated franchise been a challenge? Is it a balancing act?

MJK: That's a question I get quite a bit, and it totally makes sense, because the games are for mature audiences. But it hasn't been that difficult. In terms of the main storytelling arcs that you find in the games, those are universal. So it was actually pretty easy to create the same kind of story that you'd find in the games, and put them in a book for young readers. Younger readers, teens, they're just as interested in history and these mysteries and these fast-paced action adventures. For me, it was just a question of toning down the blood, I suppose. Like, if you go into the game settings, and you can turn off the blood – I guess in some ways, writing the books there was that consideration, but I am a firm believer that young readers, teens, they can handle a lot more than they're given credit for.

I've always had an approach to my writing for young readers, where I never assume that they can't handle something, or that something is too much. For me, it's just about finding the right way to present it. For example, in the first book, you're dealing with some really heavy issues. Issues during the American Civil War that centered on racism, and poverty, and class warfare, slavery, all of those things. I really wanted to address them in the book, because it would be dishonest, I think, to try and present those events without showing the truth. But again, it's not that there are any topics I think are necessarily off-limits; it's just in the way it's presented.

UB: Do you see this as a finale for Last Descendants? Would you want to do more with these characters, given the opportunity?

MJK: The way I write, I always feel like I could do more. At the end of a book, every book I've written, whether it's a part of a series or not, I always feel like the end of the book is in some ways the beginning to a new story. And there's always a desire to find out what happens next. I mean, I definitely bring this chapter to a close ... but of course each of those characters goes on in their lives, and each of them has been changed in really interesting ways. And I do sort of have ideas where it might go, but there aren't any definite plans at this point. But I'm certainly open to it; I love the characters, and I think it'd be really interesting. So I guess we'll have to see if the fans want more!