With its strong focus on multiplayer action and giving players a dynamic, continually evolving experience, it should come as no surprise there are big plans in the works for Rainbow Six Siege after its launch on Xbox One, PS4 and PC on December 1. The developers have pulled back the curtain on what's ahead for 2016, including new content and support plans, which we've detailed below.

Rainbow Six Siege will be actively supported with regular gameplay balancing, tweaks, improvements to features, and detailed patch notes. Additionally, a dedicated team of about 80 people will continually listen to fan feedback, monitor gameplay statistics and ensure that the experience is the best it can be. Events and competitions are also in the works, as are four major content expansions for 2016 that include new maps, operators, modes and weapons that will be playable at no additional cost.

Over the course of the coming year, Rainbow Six Siege will receive four major content expansions that are divided into seasons. Each expansion adds one new map and two new operators, each with a new unique gadget and new primary and secondary weapons. New game modes, cosmetic items and in-game events will also be released during the year. While all maps and modes will be immediately available to all players, the new operators and weapon skins will need to be unlocked with Renown, which is earned while you play, or purchased with R6 Credits. Also, there will be a number of premium weapon skins that can only be accessed with R6 Credits. These are purely cosmetic, however, and won't affect gameplay. 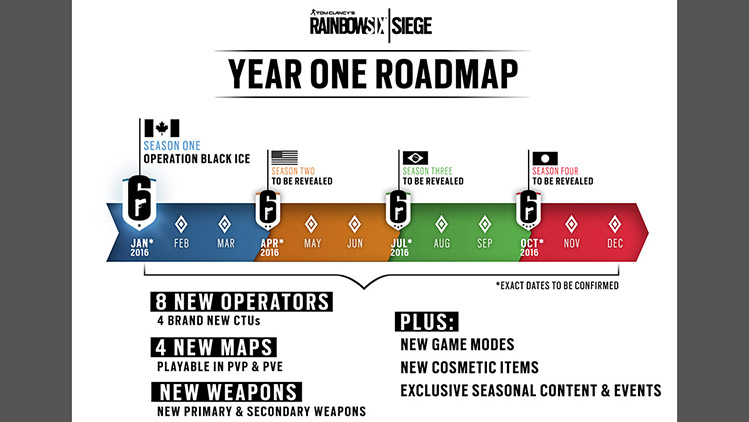 How will Renown and R6 Credits work?

Nearly everything you do in Rainbow Six Siege will net you Renown, including winning or losing matches, kills, assists, reviving teammates, playing ranked matches, watching tutorials or completing Daily Challenges (more on those below). Killing teammates will negatively impact your Renown, however, so watch your fire. The developers estimate most players will earn around 1,000 Renown for each hour of gameplay.

Meanwhile, R6 Credits are an optional premium currency that will be available at launch in packs of 600, 1200, 2670, 4920 or 7560. A pack of 600 R6 Credits will cost $4.99 USD, with larger bundles offering more Credits per dollar. In addition to enabling players to buy content rather than spend Renown, you can also purchase Renown Boosters, which will generate Renown more quickly while playing.

How will new operators be unlocked?

The 20 operators included at launch can be unlocked relatively quickly with Renown – the first one you unlock in each counter-terrorist unit costs 500 Renown, the second is 1,000, and so on. Operators added after launch will be available for 25,000 Renown each, reflective of around 25 hours of gameplay. Data collected by the development team suggests that FPS players tend to spend around 8-10 hours per week playing their favorite game, meaning it should take between two and three weeks of regular play to unlock a post-launch operator. Alternately, new operators can be unlocked for 600 R6 Credits ($4.99 USD).

What are Daily Challenges?

Daily Challenges are optional goals that can net players extra Renown. These might include, for example, eliminating a certain number of opponents in a single match, performing a set number of headshots, or winning a number of matches or rounds.

How will premium weapon skins work? 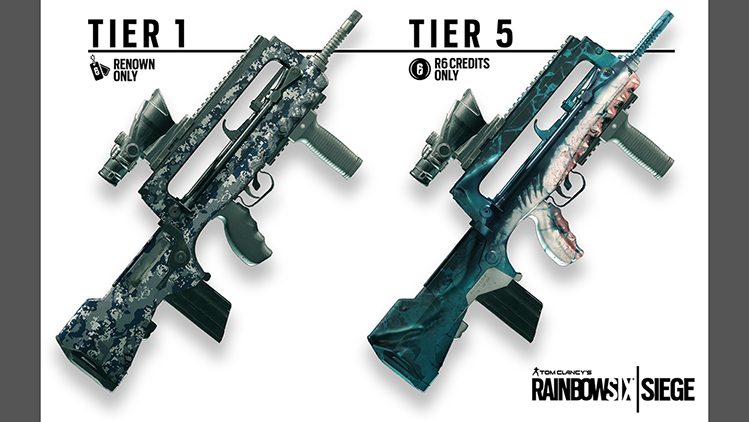 Check out the official Rainbow Six Siege site for more information and insight into the game's post release content.

For more on Rainbow Six Siege, keep an eye on the Rainbow Six hub and check out these features: