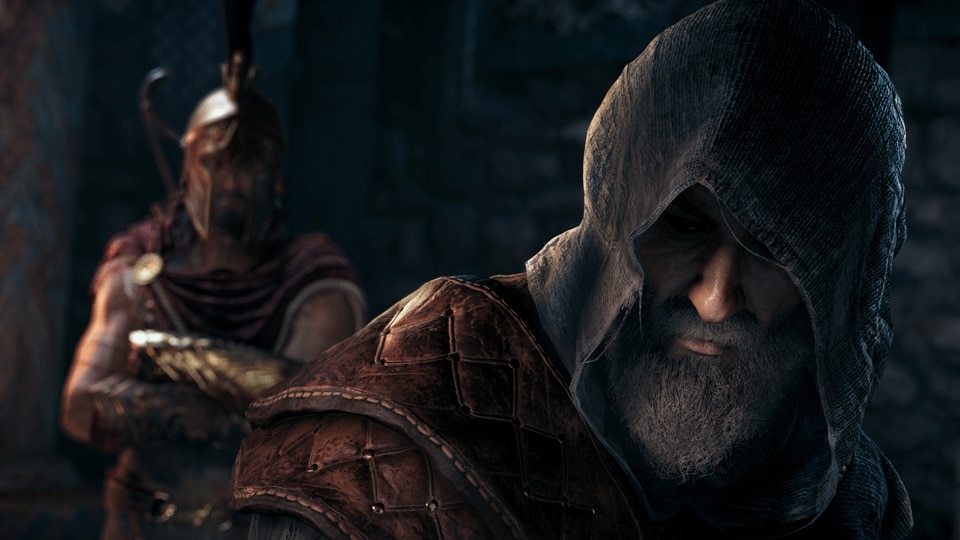 Legacy of the First Blade is the first major post-launch story arc for Assassin's Creed Odyssey, and its premiere episode, Hunted, launches on December 4. Taking Alexios or Kassandra far north to Makedonia, Hunted begins a new questline focused on Darius, a Persian predecessor to the Assassins and the first recorded wielder of a Hidden Blade. It also adds a new Assassin Ability to unlock, new side quests to pursue, and a sinister Persian order with secretive leaders to hunt across Greece.

Darius – who fans might remember as one of the ancient Assassins enshrined under the Villa Auditore – has been living in hiding since killing Persia's King Xerxes. He's a man of many secrets, some of which you'll gradually discover over the course of Legacy of the First Blade. Along with his son or daughter, Natakas or Neema (with the one you meet determined by who you're playing as), he'll prove a valuable ally in your battle against a new enemy.

Intended for players level 28 and above, Hunted will unlock once you're past the Naxos questline in Episode 7 of the main storyline. It'll give you a chance to chase the new level-70 cap and unlock a new high-level Assassin Ability, Death Veil. Intended for meticulous sneakers who don't want to leave a mess, Death Veil reduces the risk of alarms by making every stealth-killed enemy instantly vanish. The second and third episodes, Shadow Heritage and Bloodline, will also add one new Ability apiece when they launch in early 2019.

Your new Ability will come in handy against Legacy of the First Blade's new antagonists, a secret society of Persians fond of wearing masks. They've come to Greece specifically to find, torment, and destroy you, but you can turn the tables by tracking and eliminating the seven heads of one of their order's branches, the Hunters. One of the quickest ways to find clues to their identities is by taking on Hunted's new side quests, which run the gamut from finding a thank-you treasure (surrounded by bears) to hunting mercenaries at the behest of a foul-mouthed old lady.

All three episodes of Legacy of the First Blade are available as part of the Season Pass for Assassin's Creed Odyssey, which also grants access to Fate of Atlantis, a second episodic story arc coming later in 2019 that will delve deeper into Greek mythology. Both story arcs are also available for purchase separately.