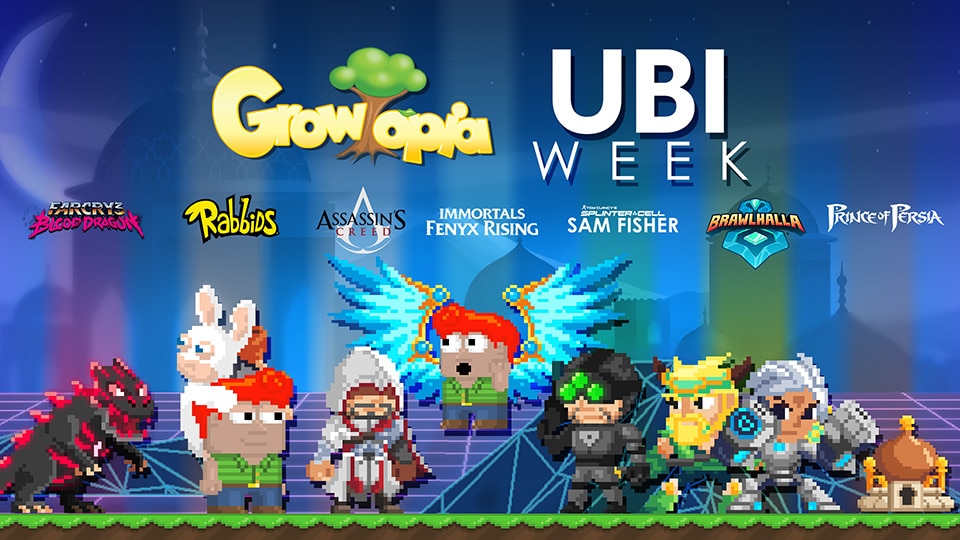 Growtopia, the free-to-play 2D sandbox game from Ubisoft Abu Dhabi, is celebrating its 10th anniversary with a special in-game event. Dubbed Ubi Week, the event starts today and ends on January 30, offering players the chance to get their hands on exclusive in-game items from some of Ubisoft’s most iconic franchises, including Assassin’s Creed, Splinter Cell, the Rabbids, and more. With backgrounds, character customization items and outfits on offer, discover everything available during Ubi Week. Unlock these items through event drops and the Growtopia store!

Fully transform your character into everyone’s favorite elite field operative, Sam Fisher. With this iconic outfit and the exclusive knife slash animation it comes with, you’ll be the sneakiest agent in all of Growtopia.

Join the Assassins in their fight against the Templars by transforming your character into Ezio Auditore da Firenze, master Assassin of the Renaissance, with exclusive knife slash animation.

Soar into the highest of fashion with the Daidalos wings, with feathers that ruffle in the breeze when equipped.

With a Rabbid at your back, you’ll be unstoppable. This adorable little pest will sit on your character’s shoulders and throw toilet plungers at your enemies to damage and shame them.

Prince of Persia: The Sands of Time

This unique background will transport you to the world of the Prince and make you feel like you’ve turned back the sands of time.

Become a Legend by transforming yourself into Brawlhalla’s Bödvar, complete with his famous hammer, or Val, the android ninja that throws energy shuriken.

You can play Growtopia free on the App Store and Google Play Store, Mac, and PC, so dive in and join the Ubi Weeks event now. For more news from all of Ubisoft’s games, stay tuned to the Ubisoft News hub.