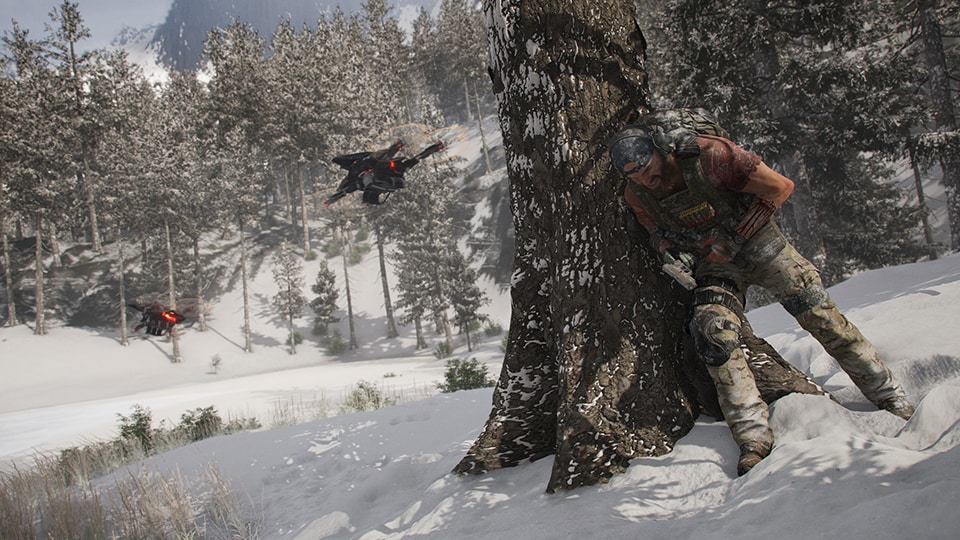 Ghost Recon Breakpoint – Building A World That Tells Its Own Stories

Ghost Recon Breakpoint's Auroa archipelago isn't just one of the biggest open worlds Ubisoft has ever created – it's also one of the most richly detailed, a place where high-tech cities rise amid dense rainforests, picturesque fjords, and lush meadowlands. Its miles of scenery are a key part of gameplay, with treacherous terrain that can exhaust or seriously injure the Ghosts as they explore. And all of it was carefully created by teams working to develop the world piece by piece, while still ensuring everything fit together on a macro scale as a vibrant, coherent whole.

One of the people overseeing Auroa's creation is Benoit Martinez, lead environment artist and technical art director at Ubisoft Paris. A 20-year industry veteran who has worked on three previous Ghost Recon games, including Ghost Recon Wildlands, Martinez is one of the leaders on Ghost Recon Breakpoint's world design team. To find out more about what makes this vast archipelago so special, we spoke with Martinez about rough terrain, Rorschach tests, and the mysteries that shaped Auroa.

What was your main goal in creating Auroa?

Benoit Martinez: Diversity, and blending different layers together. I think that's what we learned from Wildlands; it's not just building a landscape and dropping some stuff on it. Every part of this cake that you're crafting has to be meaningful, and related to the other layers. There are multiple dependencies in every direction.

Of course, there are the main pillars of Skell [the military-drone manufacturer that set up its headquarters on Auroa] and its technology. But there's also all the wilderness, and how the wilderness blends with what was the most challenging [aspect] for us: Skell modern architecture. The contrast between that was very interesting, very challenging, and that's where we had to work the most: defining the architecture, defining the design, improving our game's landscape even more, and bringing them together.

It was really important that people's interest is sparked by Auroa, and Skell, and drones, and technology. But there's much more to discover, if you want to dive in and look for the small paths, get lost inside, and try to understand all the mystery we've packed in.

How was the shift to more futuristic architecture decided, as opposed to the more rural towns we saw in Wildlands?

BM: As a team, as game developers, we didn't want to do the same thing again. It would probably have been easy to say, "OK, let's do Wildlands 2, and let's stick to South America." But there was no challenge to that, and I think it's a good choice to go where we were not expected. It's always a matter of contrast; contrast within the game, but also contrast with the previous game. We kept some of the systems [from Wildlands]; there are still a lot of dirt roads, and we still have a lot of wilderness landscapes. But now we have the modernity contrasting with the rest.

Auroa is characterized by lots of different biomes; what excites you about working with them? Do you have a favorite?

BM: I personally like the huge landscape. I like to be able to create vistas, and I like to be able to engage in these journeys through the world. Yes, Ghost Recon is a shooter; that's the main action. But the landscape and the open world really contribute to the base of the game. If you were shooting nonstop, it wouldn't be the same. You can alternate the shooting with the driving, with exploring, and I think it's a perfect fit for a game like this, where you have to be careful about everything, observe, and plan.

Personally, I like to drive. I like to walk around – because now it's much more fun to walk and slide – take any vehicle, and explore. I like to ride the old train line. I like to find all those places and figure out where it's going to take me, because it's so vast, and so big.

Even if I did largely contribute to designing the game, there are still new places to discover, and new points of view. There are places I've never been before. That's very exciting. And if it's exciting for us as game developers, it's a good sign that's going to be exciting for people who are going to discover the game.

This is the biggest open world Ubisoft has created for an action-adventure game to date; what's the biggest challenge in approaching a world of that size?

BM: It's not only about the size, it's about the relative detail you're about to put in one square meter. But yes, the world is very big.

You have to start somewhere. Even if you've had a lot of workshops, talked with a lot of people, put everything on paper, and drawn some maps, the hardest part is to raise the first terrain, and to get everyone OK with that, and to start building.

What I like to do is a bit like the Rorschach test. You put some ink on paper [claps], and what do you see? Everyone will see something different. Designing terrain, there's a bit of that. It's just shaping something, and once you get the big picture, you react, and you design on top of that, and you sculpt, and you move forward. You cannot have the exact design [from the start]; it has to be iterative. You have to start somewhere, and to improve, and to rework, and to reconsider all the time. Starting is probably the hardest part, but once it's there, and once everything's OK on the first step, then we know what we are doing.

You've spoken about players being able to discover the ruins of Auroa's original inhabitants, the Forgotten, as well as various stages of European settlement, including Cold War structures. Are those going to be self-contained discoveries, or will players come away with a bigger, more overarching picture from them?

BM: It's a bit of everything. I think we are planting seeds. Because we have big plans for post-launch, we'll see what's going to tease people's interest the most, and then we'll be able to react to that. One example in Wildlands was, in a mountainous area in the snow, one level designer put a skull and a few bones somewhere next to a cave. And someone [found it] and said, "Whoa, there must be a yeti or a bigfoot! What's going to be next?" And we're like, "What?"

But then we made a DLC of that, a title update, and we created the legend, and we created this sniper [El Yeti] with his white ghillie suit, hunting you down in the snowy area. We built a legend on top of the legend. So hopefully, we've put so many things here and there that we'll have many, many opportunities to keep the game alive, and to keep creating new stories, new events, and new things to do and find out. Not everything is exposed at first.

Auroa has a lot of diverse elements, like nature and shipwrecks and ruins, which exist alongside the more modern architecture in the villages and cities. How do the artists and designers tackle such a wide range of scenery?

BM: Based on our Wildlands experience, we added more subteams to the world-building teams. There are a few people working on the landscape; the terrain, the forests, the rivers, everything natural. Then we split the world into different provinces related to the gameplay, or the biome, or the story; for each area, there are a couple of people – artist and level designer – working there, doing the world-building and world design. They work mostly on the location; not that much on the landscape. And then other people are connecting all the locations with roads, and stuff like that, all the networks.

We've also added a new team dedicated to what we call the "wild mysteries," all those hidden places I mentioned. This team was in charge of creating as many small, specific landmarks or locations as possible. Specific landmarks, rock formations; something unique. Just a shelter in the middle of the forest, or a mine, or something to find that could be of interest to the player in terms of building this world's consistency, while also creating an opportunity to add some new loot to find.

We are trying to split the responsibility, so everyone knows what exactly they should focus on, while giving them the tools, support, and management to be sure that it all blends nicely together.

Terrain factors heavily into Breakpoint's gameplay; a climb can exhaust your stamina, and a slide can send you tumbling. Was the terrain built with that in mind, or did the terrain have to be reshaped once that concept came into being?

BM: The first iteration, just like Wildlands, was to design the terrain. So for the first six months or so of production, it was very much focused on the base terrain. But then our tools allowed us to work on all the frequency of detail in the terrain. So we started with what we defined as the low frequency of terrain, the big volume. And then we moved on to the medium frequency, the hills and valley and largest river, and everything. And then we ended with the fine detail.

So always, always move on, and try to make opportunities even from mistakes. If we've created a road with a weird shape, and we want to get rid of this curve, let's use it as an opportunity and put a big rock formation there. We won't touch the road, but we'll justify it with maybe another element that's going to give it more character.

Were there any moments when the terrain design interfered with the new gameplay elements?

BM: No, not interfering; it's the opposite. On Wildlands, we put the terrain first... and were expecting the designer to just deal with it [laughs]. Telling the gameplay programmer, "OK, that's the terrain, do your job and have the character work on that." This time, we worked much, much better all together, so we took great care in what we wanted to achieve in terms of navigation.

We wanted the character to be able to move freely everywhere, but it was also very important to be able to slide down slopes. It was important to be able to climb much better, and to use all the terrain as a gameplay opportunity, to use rocks and trees as cover during a fight. We have to be sure that all the forests and rock formations are gameplay-friendly and gameplay-compliant. Nothing is too close, nothing is too far; it creates a nice density of cover that you can walk around, but also has enough space for the AI to find its way around. This was very important from the very beginning, and it required great care.

Ghost Recon Breakpoint launches on PS4, Xbox One, and PC on October 4, and will be available on Stadia at launch. For more on Ghost Recon, check out our previous coverage.