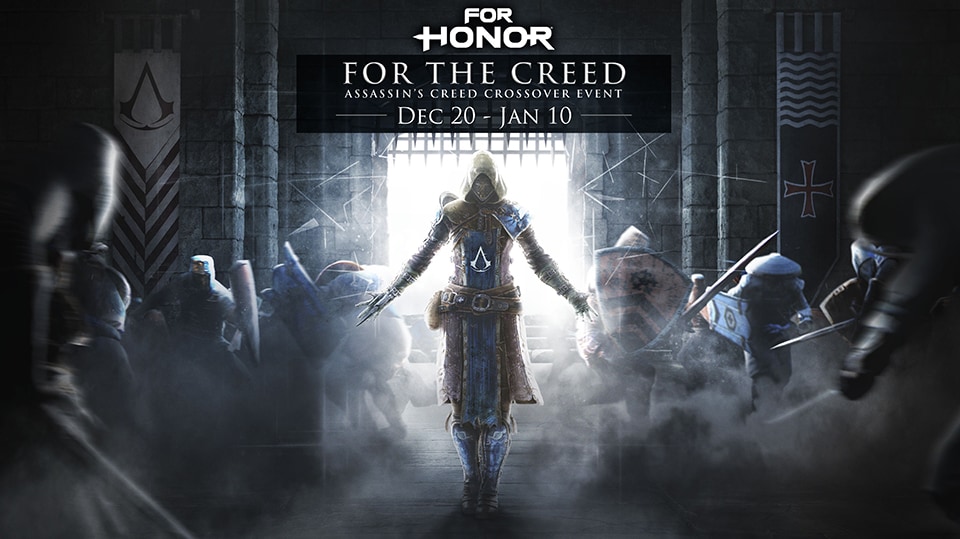 For Honor – Assassins Join the Fray in For the Creed Event

Get ready for an Animus experience unlike any other. Starting today, For Honor will get a serious dose of Assassin's Creed in its first-ever crossover event, For The Creed. Running until January 10, the event will transform the For Honor experience with a new Assassin's Creed-themed twist on Dominion mode, new map visuals, and new outfits, gear, executions, and emotes.

Those morally ambiguous folks at Abstergo have been toiling away to create a new gaming experience out of reliving the genetic memories of battle-hardened Knights, Vikings, Samurai, and Wu Lin Heroes, and the result of their work is For The Creed. Over the three-week event, players will have access to a special version of Dominion, which pits Assassins against Templars. Players will still vie for control of three zones across the map, but when your team captures the zone closest to your enemies' spawn point, you'll lure out their commanders. The commander for the Assassins is Ezio Auditore da Firenze, while the Templars are led by Cesare Borgia. With massive health pools and devastating area area-of-effect swings, these commanders won't be easy to take out, but doing so nets your team 300 points and propels you that much closer to victory. The first team to reach 1,000 points and successfully eliminate all opposing team members wins.

Dominion mode isn't the only thing changing in For The Creed. Each of the three maps selected for the event have received a visual refresh, featuring Animus glitches and Assassin and Templar banners and flags. Additionally, all minions will now represent a faction specific to the Assassin's Creed world. Since the events of For The Creed take place within the Animus, you'll also notice that Warren Vidic, director of the Animus Project at Abstergo Industries, has taken over as match narrator.

As with all For Honor events, For The Creed offers up a wide variety of customization items to let you rep the Assassins or Templars as you see fit. New Spartan-themed Mask Outfits based on Assassin's Creed Odyssey are available for all Heroes, while distinct weapons based on various games in the Assassin's Creed franchise are available for each Hero. You'll also be able to loot special themed emotes, executions, mood effects, and battle outfits in all game modes during the event. Lastly, no matter what customization items you equip, all drop attacks during the event will be executed as air assassinations.

For those of you who have yet to step onto the battlefield of For Honor and its recent expansion, Marching Fire, the For the Creed event coincides with a series of sales, making it a great time to jump in. Discount dates, pricing, and platforms are detailed below:

For The Creed will be available from December 20 through January 10 on PS4, Xbox One, and PC. For more on For Honor, check out our previous coverage.