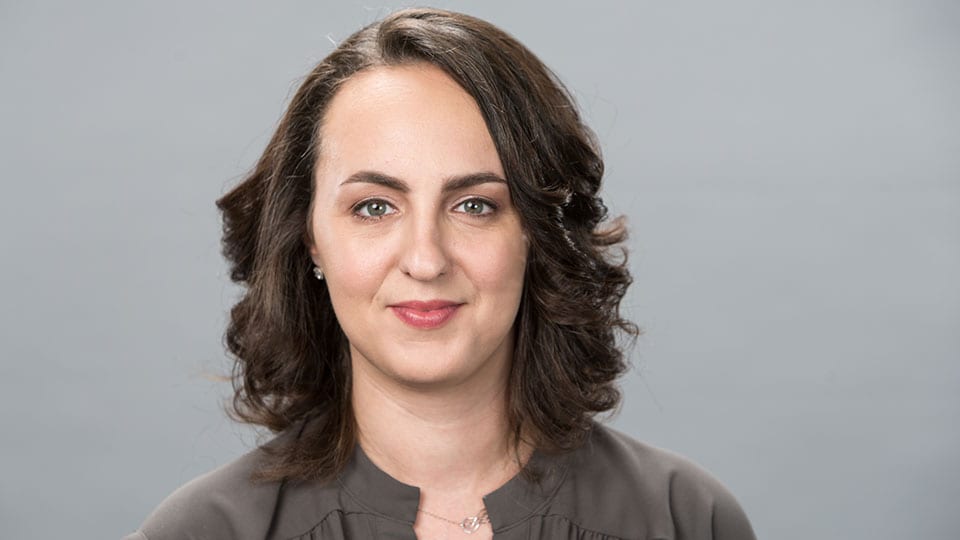 As the director of development for Ubisoft Film and Television, you'd expect Danielle Kreinik to have many talents, but you might not expect one of those talents to be singing opera. The West Virginia native attended Indiana University where she studied opera in hopes of becoming an actor. In 2005, she committed to making that hope a reality by moving to Los Angeles. After a few years working in Hollywood, Kreinik realizing that acting wasn't something she enjoyed, which led her to discover her true passion, producing

In pursuit of this new career path, Kreinik secured a job at Thunderbird Films, a Canadian production company which had recently opened an LA-based office. In her eight years with the company, she helped produce more than 250 episodes of television across a wide variety of genres. With so much experience under her belt, Kreinik decided to try something new. That's when she was inspired to join Ubisoft's new Film and Television division in LA as director of television development.

What made you realize that you wanted to pursue production rather than acting?

Danielle Kreinik: I had originally come to LA to act, but I officially made the transition over to development in late 2009. I had been producing a stage show. I was acting in it, singing in it, and producing it. It was then that I understood that what I liked best was being behind the scenes and pulling the show together; it was a challenge and I love challenges! It was really exciting to pull all the pieces together and see the show work. That's when I realized, "This is what I'm meant to do."

Were you familiar with Ubisoft before you joined the company?

DK: I knew about Assassin's Creed, the Tom Clancy games, and I had played some of the indie titles, but I didn't know the extent of Ubisoft's library. It was exciting to get to work for a company that creates such incredible worlds.

What does a director of development for television do?

DK: A development executive's job is to take ideas and shape them into immersive stories. I put together the creative pieces – like the writer who creates the world and the director who creates the vision – to make the best possible project, so the story can stand on its own.

DK: When we're working on adaptations of our games, we develop with an eye to the themes, tone, and iconic touchstones of game. For example, we are currently working on an adaptation of Skull & Bones that we're really excited about because of the rich world the team is building.

For the original projects, we're interested in topics within the gamer world and community, or subjects that we can bring meaning to. These start as a kernel of an idea that we develop completely from the ground up with a writer.

What's your relationship like with the studio behind a game for a preexisting IP?

DK: We want do our best to be collaborative and transparent. We actually just took our writing partners to Singapore to visit the Skull & Bones team, and they're amazing. We sat down with them for a two-day intensive session.

What do you think is necessary to do justice to a videogame adaptation?

DK: I think you need to stay true to the world of the game you're adapting. Our players have played these games inside and out, so they're not interested in seeing the same thing they've done many times over again. Our goal is to develop a television series that complements the game. We are creating a new story within the world, with new characters, utilizing the iconic touchstones, tone, and themes from the game.

DK: I love development. I love to see a world and characters come to life; that's the most exciting part for me. Starting from nothing, and then building out this world that's so vivid that you can't wait to share it with everyone, is what I've always loved about this job. You get to be creative all day and you play imagine all day.

"Personally, I want to see stories from different points of view, and I don't think we've seen enough diverse storytelling in film and television. I think being able to tell stories from a different point of view opens up a new world, and that is always my goal."

Is there a particular moment in the development process where you see the project come to life?

DK: I think there are a couple moments when that happens. The first time is when you get the first script and think, "Wow, these people are on the page, they're real." After that, once you get the project on its feet and you see the actors in those roles, it's such a great moment because you've spent so much time with these characters, so to see actors embody those characters that you're really passionate about is really exciting.

Videogame development has a large gender disparity. Is the same true for film and television?

DK: There's definitely a disparity in Hollywood as well, and we're working in our way to help change things. It's a male-dominated field, but I think slowly but surely it's becoming more equal. One thing that my colleague, Margret Boykin, and I have put in place here at Ubisoft Film and Television is the Women's Film and Television Fellowship. She was noticing that when she would get writers lists for our big projects that there were little to no women on those lists. So we figured out a way to bring in women who want to work in this space by creating the fellowship. This gives the winners a chance to share their voice and create something within the genre space.

It's a six-month non-exclusive paid fellowship, because we value our writer's time. Last year, at the end of the fellowship, both the film fellowship winner and TV fellowship winner got script deals, which was really exciting. They pitched out these huge worlds and we loved both of them and are working on developing them both now. We recently just started working with our fellowship winners for this year. It's been a wonderful experience, we're discovering distinctive voices that are out there waiting to be read and heard. We got more than 150 submissions this year, which we were really happy about.

Why do you think it's important to elevate female voices?

DK: Women aren't often given the chance to write within the big genre spaces. That was made obvious by the lists of writers we were getting. For us it was important to raise up these voices that are not being read or heard in this space.

Personally, I want to see stories from different points of view, and I don't think we've seen enough diverse storytelling in film and television. I think being able to tell stories from a different point of view opens up a new world, and that is always my goal.

When you see yourself or your experience reflected on the screen, it makes you feel powerful; it makes you feel seen. Being able to tell those stories in both film and television is vital to us because these are important stories that should be seen because they open people's eyes to what the world is like outside of their experience.

Skull & Bones is going to be a female-led TV show. Was that inspired by a desire to tell a story from a new perspective?

DK: I watched the trailer when I came to Ubisoft, and saw that one of the lead characters in the trailer was a female pirate. That's a story I've always wanted to see. There were a handful of very powerful female pirates, but we have never gotten to see or hear their stories on screen. We partnered with Atlas, who made Wonder Woman, which was a perfect match for our vision. Next we attached, Amanda Segel who showran The Mist, to write the script for us. She is incredibly talented and has created characters we've never seen on screen before.

Are there any women in the industry whose work you admire?

DK: Absolutely. Women like Cindy Holland at Netflix, who has truly changed the landscape of television by greenlighting outside the box projects. Similarly, Jen Salke was just brought in to oversee Amazon and I'm really excited to see where she takes the network. I'd also say Nina Jacobson, who is the producer of movies like The Hunger Games and Crazy Rich Asians. Her taste is impeccable!

When you came into this role at Ubisoft, was it with the intention of raising underrepresented voices?

DK: That's always my intention. I want to tell new stories. How do we see things from new perspectives in worlds that we've seen before? I don't necessarily set out to make something more diverse, but organically it tends to work out that way when you hear a pitch on a project. We hear multiple pitches on projects and we select the one that feels the most exciting and fresh.

What advice would you give to someone who wanted to get into film and television development?

DK: Read. A lot. Play and be creative and find things that excite you. For me, that was it. This job is everything I love to do. I love to read, I love to write, I love to imagine, so just immerse yourself in the world and find the job that speaks to you, but be patient with production and finding projects that speak to you. It takes time and it's important to trust your instincts.