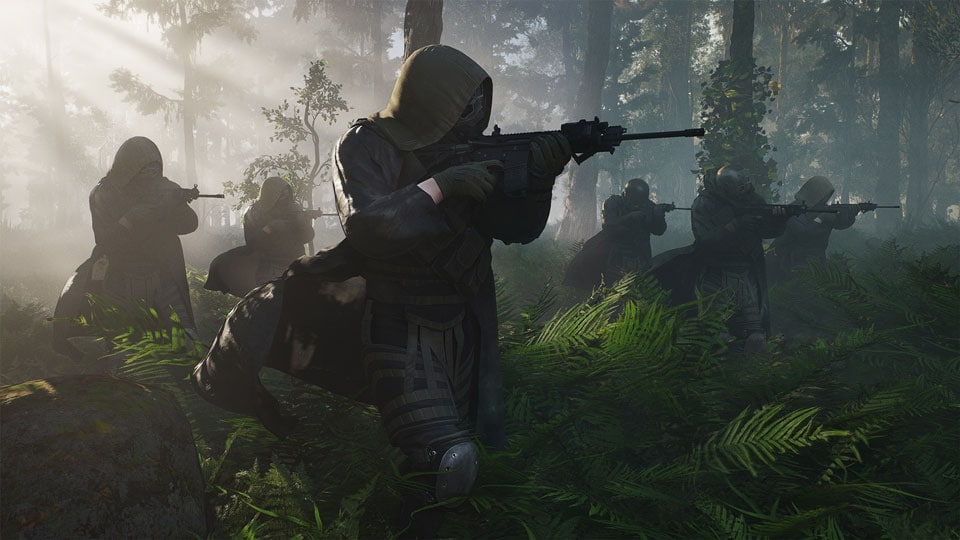 Ghost Recon Breakpoint introduces a completely new dynamic to the gameplay that began in Ghost Recon Wildlands. You can feel it in the way your Ghost approaches uneven terrain, moving deliberately as they work to find footing amid jagged rocks and steep hills. You can sense it in the way that the enemy is always hunting you with patrols of soldiers and all-seeing Predator drones; the Wolves know you're coming, and they're ready. You'll especially feel it when your Ghost is injured or wounded, and has to limp for cover before they can patch themselves up and get back in the fight. The Auroa archipelago is deeply hostile territory, and it wants you to feel trapped.

We've had a chance to put the Ghosts through their paces by exploring, sneaking, and shooting our way through a small slice of Auroa, challenging the Wolves – a renegade military unit led by Lt. Col. Cole D. Walker, a former Ghost – and their army of military drones. And while the Ghosts may be surrounded by overwhelming odds, their skill set is even more formidable than before. Whether you're playing solo, with co-op players, or with AI teammates (which will be added after launch), your Ghost is more than ready to push back against whatever the Auroa archipelago can throw at them.

If you're looking for an example of just how dangerous Auroa can be, the Behemoth is a good place to start. A massive drone the size of a large tank, the Behemoth guards a loot-filled antenna tower surrounded by a picturesque field of blood-red flowers. If it sees you, it'll open up with hails of machine gun fire and salvos of mortars, and even a team of Ghosts can get wiped off the map in a hurry if they're careless.

The behemoth has weaknesses, however, and to exploit them, you might have to tinker with your loadout a little. EMP grenades are one way to hurt it, briefly stopping the Behemoth in its tracks and giving you an opening to hit it with everything you've got. Another is a rocket launcher, which can sub in for your cutting torch – a useful new item for breaching security fences – and deliver quick bursts of damage, if you don't mind dashing around the area to hunt for more of its limited ammo.

In general, EMPs and explosives are a solid bet when you're going up against land-based drones, like the car-sized Incubus drones that frequently patrol near the Wolves. For zippy flying drones, you're better off with a shotgun, unless you're a crack shot against high-speed targets. And if you see a Predator drone incoming on your radar, your best bet for survival is to hit the deck, use the new Prone Camo feature to cover yourself in mud, and lie still.

Not all new threats are automated. There's a wide variety in the human enemy types you'll face as well. For example, if you're approaching a secure compound, you'll want to use your own drone to scout around and spot any soldiers carrying rocket launchers. These can make short work of you, and should be taken out first – and if you're not looking to go silent, a well-placed shot can detonate their backpacks.

Once an alarm sounds, though, you may have to deal with a variety of other troops, including armored heavies and possibly even the Wolves themselves. Luckily, alerts work on a per-player basis, so if one of your co-op buddies attracts the enemies' attention, the rest of you can stay hidden while the careless one draws fire. It's easy to see how this might work as a tactic, with one player pulling attention away while the rest sneak in.

The Wolves are instantly recognizable by their ballistic masks and longcoats, and they represent Auroa's most formidable troops, with the same training, skills, and equipment as the Ghosts. Some of the stiffest challenges you'll find in Ghost Recon Breakpoint involve clearing out their high-tech camps, patrolled by drones as well as packs of the Wolves themselves.

Sometimes, though, the terrain itself is enough to do you in. Your Ghost now has a stamina meter, and hiking uphill will chip away at it. So will sliding downhill, and if you run out of stamina on a sharp incline, you may take a bad tumble. You'll also need to be careful driving around rocky terrain or plunging off a cliff at high speeds; not only can your vehicle get stuck, but a particularly bad crash can leave you injured.

If you sustain a debilitating injury or wound, the effect is immediate; you'll start limping slowly, for example, or your vision will blur. Healing syringes that would normally keep you alive will be useless in this state; instead, you'll need to drag yourself to a safe place for several crucial seconds and apply a bandage. With that out of the way, you'll be able to heal normally – just remember to do so before you charge back out into the action.

Top of the Class

To deal with these threats effectively, you need to be able to adjust your strategy, loadout, and abilities on the fly. (That's especially true in PVP or four-player co-op, where you'll need to weigh your strengths against those of your teammates and opponents.) This is where the new class system comes in, enabling players to quickly switch roles as the mission demands. Three were playable during our time with the game: Assault, Sharpshooter, and Panther, each of which supports a different playstyle through its loadouts, special abilities, and unique equipment.

The Assault Ghost we played as carried a light machinegun and silenced SMG by default (although there won't be any class-based restrictions on weaponry), and packed a unique smoke grenade, as well as extra health and the ability to move more easily with any kind of weapon. Panthers, meanwhile, get bonuses to stealth and movement speed, as well as a light-absorbing Cloaking Spray. Sharpshooters carry sniper rifles, get bonuses when using long-range weapons, can hold their breath longer when aiming, and can deploy an advanced sensor launcher, which locates and tags all nearby enemies.

Each class also has a unique skill powered by a meter, and different actions will fill that meter faster depending on your class. As a Panther, for example, the key to more quickly unleashing your Cloak & Run technique – which creates a smoke cloud that makes you invisible to all enemies for a few seconds – is to kill enemies as close-up as possible, like with CQC. Meanwhile, if you're playing as Assault, killing enemies with explosives will get you closer to activating your True Grit ability, letting you fight with reduced weapon sway and regenerating health. Sharpshooters who kill enemies from afar can let fly with an Armor Buster, which can take down heavier enemies and even vehicles with one shot.

You can switch to a different class at any time at a bivouac – a makeshift campsite you can set up wherever you see the remnants of a campfire – which is also a great opportunity to rest and give yourself some temporary buffs. Optional acts of self-care can yield serious bonuses, if you watch them play out; stretching boosts your stamina by 10%, hydrating gives you a 20% bump to fatigue resistance, and eating something will raise your resistance to injury by 10%. You can also review your weapons, tech, and resources to increase your accuracy, extend your drone range, and get an XP multiplier, respectively. Resting at the bivouac also lets you quickly advance time, in case you prefer to tackle a mission in broad daylight or under cover of night.

With diverse biomes, no shortage of interesting threats, and plenty of ways to push back against them, there's going to be a lot to discover when Ghost Recon Breakpoint arrives on October 4 for Xbox One, PS4, and PC, and on Stadia when it launches. For more on Ghost Recon Breakpoint, check out our previous coverage, and visit our E3 hub for more news from the show.